Law on the Open Road: One Man's Avocation has Become His Niche 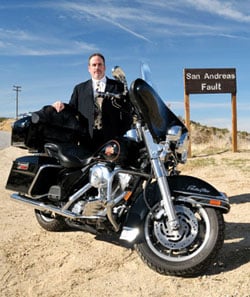 Age 4 was formative for Norman Gregory Fernandez. he learned to ride his first mini-motorcycle, and that same year he announced to his father that he was going to be an attorney—so he could live in a mansion, of course.

Today, many clients of the law offices of Norman Gregory Fernandez & Associates share his passion for a “burst of dirty thunder” and the open road. The Chatsworth, Calif.-based firm handles personal injury and motorcycle-related cases throughout the state.

Known as “the Biker Lawyer,” Fernandez has built a niche practice around his passion for motorbikes and involvement in the motorcycle community. He also writes the Biker Law Blog, where he posts on legal issues, safety tips, ride reports and general personal injury topics. The popular site attracts 1 million page views each month and brings in a substantial number of new clients.

Yet Fernandez wasn’t always keen to be known in the legal community as a biker lawyer.

“I was worried it would detrimentally affect my career,” Fernandez says of his biker image, which includes six tattoos (and counting), a goatee and a leather motorcycle-club vest. However, in 2001 the former Air Force enlisted man and senior engineer working at NASA was outed when a judge and fellow solo spotted photos of him in the Los Angeles Times as winner of Mr. Beach Ride at the annual charity motorcycle event.

“Basically, I looked like a bodybuilder,” laughs Fernandez. “Nobody had a clue that I was an attorney. It’s like Dr. Jekyll and Mr. Hyde. Most people think I work in construction.”

“I was embarrassed and tried to keep it hidden,” he says, “but suddenly all of these motorcycle guys started coming to me for legal services.”

In 2005, after a three-year stint at large law firms, Fernandez returned to solo practice, which had been his initial career path as a graduate of the University of La Verne College of Law in Ontario, Calif. He says his ego and his commitment to ethical lawyering—both “monumental”—are better suited to running his own practice and calling the shots. (Fernandez now works with three of-counsel lawyers.)

His blog, launched in 2005, was meant to be a creative outlet where Fernandez, a self-diagnosed “tech geek” who owns and runs a host of other websites, could delve into discussions on ethics, the law and motorbikes, as well as the occasional political rant.

When comments started to flood his e-mail inbox—along with inquiries from other bloggers, industry experts and avid readers demanding to know why the next post wasn’t online—Fernandez’s first thought was, “Oh my God, people are reading this!”

A professional Web design and a boost in bandwidth capacity soon followed. He also gained notoriety within the biker community as a motorcycle attorney who actually rides bikes. “It was amazing to me that I was getting clients because I was active in the motorcycle world,” says Fernandez, who estimates that 15 percent of his clients are riders.

“There are major entities that advertise in biker magazines, but the biggest joke is that none of them ride,” Fernandez says. “Clients that would ordinarily go to them are now coming to me.”