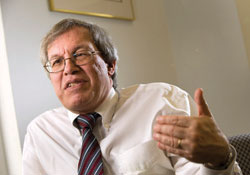 The U.S. Supreme Court enters the final two months of its term with another menu of blockbuster decisions forthcoming: Same-sex marriage; the future of the Voting Rights Act of 1965; the routine DNA testing by the police of certain criminal suspects; and whether human genes are patentable. The court’s decision in a major case involving race in college admissions was pending as of deadline.

So how well will the justices communicate their decisions in those cases to the public? It isn’t hard to think back to a year ago, when the complex holdings of the court’s Patient Protection and Affordable Care Act ruling flummoxed a couple of major cable TV news channels.

Erwin Chemerinsky, dean of the law school at the University of California at Irvine, has some thoughts on this. He gave a speech at a January 2012 symposium at Brigham Young University law school about how poorly the Supreme Court communicates to the public, and he offered some ideas on how it could improve.

The speech got a bit of news coverage at the time—well before the Affordable Care Act cases were argued or decided. Chemerinsky has refined his remarks for an article in a recently published issue of the BYU Law Review.

“For better or worse, the Supreme Court gets the last word on so many of the issues that are among the most important and controversial in American society,” Chemerinsky says in the law review version of his remarks. “Yet most people have far less sense of the court than other institutions of American government. In part, this is because of the court’s serious failure to communicate.”

Chemerinsky, who writes widely on the law (including a monthly column on the ABA Journal’s website) and built a well-respected law school at UC Irvine from scratch in just a few short years, offers some very specific suggestions for how the high court could do a better job of communicating.

• The Supreme Court should offer brief reasons for why it denies review in a particular case;

• All Supreme Court proceedings should be televised—both oral arguments and opinion announcements;

• The court should announce a day in advance which opinions it will release on a given day;

• Each decision of the court should come with a short, perhaps two-paragraph, “plain English” explanation of its central holding. This would be in addition to the usual multipage syllabus prepared by the court’s reporter of decisions. Like the syllabus, the short summary would not be considered part of the official opinion and would have no precedential effect;

• The justices should spread out the release of their decisions and should not, as they often do on busy days late in the term, announce five or six opinions in one day;

• And there should be presumptive word and page limits of high court opinions.

“I have all sorts of good ideas that I don’t think will ever actually happen,” Chemerinsky says in an interview. “That has never stopped me before.”

Chemerinsky is more than happy to expand on these ideas. 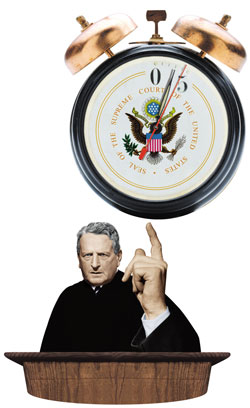 First, when the court denies certiorari on appeal, he sees no reason why it cannot offer an explanation. He suggests that even a simple sheet of paper will do on which the justices check off a reason for a denial, such as “no circuit split.”

“I find one of the most frustrating things as a lawyer is just hearing ‘cert denied,’ ” he says, “without any idea as to why the Supreme Court is refusing your case.”

When it comes to decisions, Chemerinsky says his plain English idea for a short summary would help keep cable TV channels from rushing onto the air with the wrong outcomes. And issuing multiple decisions on the same day makes it harder for reporters—and the public—to digest the court’s work, when such rulings could easily be spread out over more days of the week, he says.

“Things like that would be so easy,” he says.

Chemerinsky is not too specific about how his word and page limits would work, but he observes that the court’s opinions only seem to be getting longer—there were 193 pages to the Affordable Care Act decision—without providing corresponding clarity to the law for lower-court judges or the public.

“They reflect a desire to make this institution more transparent to the public,” says Jones, who wrote her own paper for the symposium (on the court and press access issues) and helped pull together the issue of the BYU Law Review that is chock-full of thoughtful papers about the court, the press and the public. “Members of the general public have very little insight into what is happening at this court and why it is doing what it is doing,” she says.

Jones notes that in the “pool memos” that go from the law clerks to most justices (only Justice Samuel A. Alito Jr. does not participate in the cert pool) about each appeal that comes to the court, there are already some broad categories or reasons to check off for denying review. These include categories such as “splitless,” “factbound” and “errorless,” she recalls.

But the more difficult cases that are debated in private by the justices and then denied would probably be more difficult to categorize for a public explanation, Jones says.

“The failure to gain a grant may be for five different reasons,” she says. Among them are so-called defensive denials, when a justice withholds a vote to grant a case because he or she fears that it might lead to an undesired result. That’s not something the justices would be keen on disclosing publicly, she notes.

Jones is more enthusiastic about Chemerinsky’s idea for a plain English summary of decisions.

“I think it’s a fabulous idea,” she says, “but I suspect the reason the justices wouldn’t want to give us a very succinct executive summary … is that they believe their work product is complex and an oversimplification of it might not accurately reflect the contributions each of the justices has made.”

Indeed, when asked about communicating with the public—usually given in the context of a question about televising its proceedings—many justices respond that the Supreme Court is actually the most transparent branch of government because it explains its decisions at length through its written opinions.

“Everything we do that has an impact is done in public,” Chief Justice John G. Roberts Jr. told an audience in 2011.

Under Roberts, the court has made some strides toward greater public accessibility. It offers same-day transcripts of oral arguments available on its website, and it releases the audio recordings of such sessions at the end of each week (with same-day releases in blockbusters such as the Affordable Care Act and the same-sex marriage cases). In a move that is probably little noticed by the larger public but is an aid to reporters, the court agreed to move up the release of its normal Monday orders list to 9:30 a.m. instead of the traditional 10 a.m., when the justices take the bench.

Justice Stephen G. Breyer, while not responding specifically to Chemerinsky’s ideas, has repeatedly made the point that the court is likely to act cautiously in changing its traditional ways.

“We’re a very conservative institution, with a small ‘c,’ ” Breyer said at a congressional budget hearing in March. “We’re there as trustees. It was there before we came; it will be there after we go. The last thing any [justice] wants to do is to do something that will make it worse as an institution.”