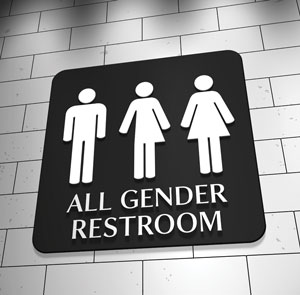 George Washington University Law School has plunged into a national debate by creating a multiple-use, multi-occupant coed restroom, according to one GW law professor.

Last December the law school relabeled as “all gender” a pre-existing male-only restroom with three urinals and a stall. The bathroom now sports two locks on the inside, including one accessible for wheelchair users.

John F. Banzhaf III, a public interest law professor, says the revamped restroom is a cost-effective way to address the concerns of transgender students torn between using the facilities for either men or women. Banzhaf says he believes the multiuse all-gender facility is the first of its kind in a U.S. university setting. There are three other unisex restrooms at the law school, all of which are single occupancy.

In a statement, the law school said administrators decided to change the bathroom to a unisex facility “in response to our dean of students’ request that we have an all-gender or unisex restroom on the first floor of the law school, where many students congregate.”

The law school maintains that the newest all-gender restroom is intended to serve as a single-, not multi-, use facility, despite the presence of urinals and a stall.

“We expect individuals to go in and lock the door behind them,” the law school said in the statement.

But Banzhaf says there remains the chance that students of various genders and identities, especially those in a hurry, could use the facility at the same time. He sees the all-gender restroom as a “great experiment” in whether universities can have restrooms where male and female, transgender or not, share the bathroom experience.

“Lots of colleges have unisex restrooms that are single seater or single user,” says Banzhaf. “But GW’s restroom goes much further. If a woman walks in, uses the stall and then goes to wash her hands, she could be standing almost thigh-to-thigh with a guy using a urinal, with no modesty wall.” At this point there has been no student reaction to the redesigned facility. The law school says that the students are using the restroom “as intended,” meaning locking the door for privacy.

This article originally appeared in the July 2016 issue of the ABA Journal with this headline: “One for All? Law prof says his school is on the cutting edge when it comes to restrooms.”