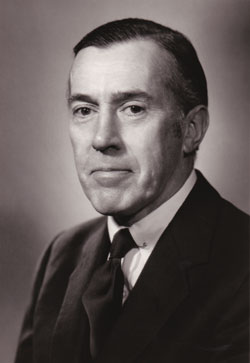 Lawrence E. Walsh, who served as president of the ABA nearly 40 years ago and participated in some of the seminal legal and political events of the last half of the 20th century, died March 19 at the age of 102.

Walsh spent much of his professional career as a prosecutor, judge and corporate litigator in New York. He also served as president of the New York State Bar Association. For many years, he was a partner at Davis Polk & Wardwell in New York City. He retired from the firm in 1982 and moved to Oklahoma City, his wife’s hometown, where he was of counsel at Crowe & Dunlevy.

“The ABA will remember Walsh for his perseverance in his efforts to investigate and prosecute wrongdoing throughout his career, and his longtime commitment to the association,” said ABA President James R. Silkenat, a partner at Sullivan & Worcester in New York City. From 1968 to ‘72, Walsh chaired the Standing Committee on the Federal Judiciary, which has vetted presidential nominees to the federal bench, including the Supreme Court, since the mid-1950s. During his term, the committee found two controversial Supreme Court nominees of President Richard Nixon—Clement F. Haynsworth Jr. and G. Harrold Carswell—to be qualified. Both were rejected by the Senate, and Walsh later expressed regret over the ABA endorsement of Carswell.

But Walsh’s “lasting legacy to the ABA was that he was the first president to recognize the need for ABA leadership in the international arena,” says Thomas M. Fitzpatrick, a member of Talmadge/Fitzpatrick in Seattle, who worked in the Executive Office of the President during the late 1970s. Walsh was a Canadian by birth, the son of a country doctor. He was 2 years old when the family moved to Queens, and he became a naturalized citizen eight years later.

THE FRUITS OF INSECURITY

Walsh recalled his younger years as being somewhat hardscrabble, and he titled his memoir The Gift of Insecurity: A Lawyer’s Life. He explained the reason for that title in a 2012 interview with then-ABA President Wm. T. (Bill) Robinson III, who is member-in-charge of the Florence, Ky., office of Frost Brown Todd. “Insecurity was a hallmark of my early life,” said Walsh. “My father died when I was in high school, and I thereafter worked part time in high school and college. Graduating during the Great Depression with mediocre law school grades, I had trouble finding a job. As a result, I greatly valued the professional opportunities that I was able to obtain. That was my gift of insecurity.”

In the mid-1950s, Walsh was appointed a federal district judge in New York. He served on the bench for only three years, but most colleagues addressed him as “Judge Walsh” for the remainder of his life. Walsh resigned his judgeship to serve as deputy attorney general in the Department of Justice during the Eisenhower administration. In 1969, President Nixon appointed Walsh to the U.S. delegation to the Paris peace talks that eventually led to the end of direct U.S. military involvement in the Vietnam War.

Walsh was 74 and semi-retired in 1986, when a judicial panel appointed him to serve as independent counsel heading up an investigation into the U.S. government’s illegal sale of arms to Iran, with profits used to fund rebels in Nicaragua. Recounting the six-year investigation in his book Firewall: The Iran-Contra Conspiracy and Cover-Up, Walsh concluded that the administrations of both President Ronald Reagan and his successor, George H.W. Bush, participated in efforts to cover up the scandal.

Walsh’s handling of the Iran-Contra investigation was consistent with his entire career, says William G. Paul, a partner at Crowe & Dunlevy, who served as 1999-2000 ABA president. “He was the ultimate professional, a lawyer’s lawyer,” Paul says. “He just knew how to get the job done.”

In 1987, independent counsel Walsh (center) spoke to reporters about the progress of his investigation into the U. S. government’s illegal sales of arms to Iran. AP Photo/Ron Edmonds

This article originally appeared in the June 2014 issue of the ABA Journal with this headline: “Lawrence E. Walsh, 1912-2014: Past ABA president also served as independent counsel investigating the Iran-Contra scandal.”