Specialists show lawyers how to use social media to advertise effectively 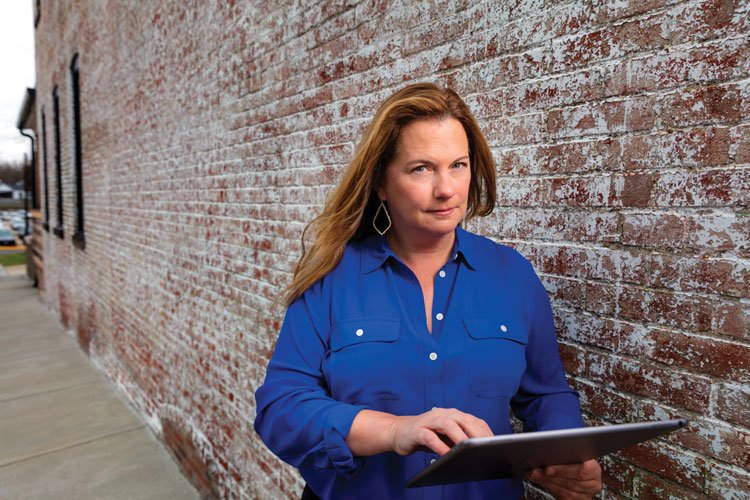 Jessica Hoerman, an attorney with TruLaw: “I spent years studying how other law firms use their voice in social media. Some do a good job, but most do a really bad job.” Photograph by Wayne Slezak.

When National Public Radio mentioned that a company had been dumping toxic chemicals into the ground for 25 years in a San Diego suburb, Toby Danylchuk knew he’d be working overtime at the office.

Danylchuk wouldn’t be speaking with potential clients about the effects of those chemicals on their water, nor would he be in court explaining how the chemical is associated with certain types of cancers.

Instead, his first task would be to help his client, a major law firm, attract victims of the toxic dumping.

“We ran paid social ads in Facebook, covering citizens living in the affected suburb, creating awareness of the disaster, and letting them know that if any of these people had cancer in their families from growing up there, they potentially had a case,” says Danylchuk, head of San Diego-based 39 Celsius Web Marketing Consulting.

The result: The Facebook advertisement was seen in 130,000 residences in the affected area. It made more than 120,000 impressions and more than 780 engagements.

“Many of the engagements in the ad were people tagging others in the area to help notify them, sharing it and commenting,” Danylchuk says, explaining that this type of specific targeting would cost thousands of dollars in print, radio or TV. But he charged just a few hundred for this social media campaign.

Businesses have been paying for outside social media help for years, but attorneys are just starting to supplement their social media needs—and it appears to be paying off.

A 2016 study found that potential clients are increasingly using social media to inform their hiring decisions—including those who need attorneys. More than half of consumers say they’d be likely to hire an attorney who is active on social media, according to an August 2016 FindLaw survey; 34 percent have already used social media to find a local service provider, such as a lawyer, plumber or doctor.

But while 96 percent of attorneys say they use social media, only 7 percent say they believe it’s directly responsible for bringing in new clients—a stat that social media experts say means they’re not using it to their fullest potential, according to a 2017 Attorney at Work survey.

“I spent years studying how other law firms use their voice in social media. Some do a good job, but most do a really bad job,” says Jessica Hoerman, an attorney with TruLaw in Edwardsville, Illinois. Hoerman says that most lawyers who use social media aren’t using it properly. Instead of building relationships online by engaging in conversations or interacting with prospective clients, they are overselling their services and work. Additionally, she says the posts and tweets lawyers and law firms share tend to be very dry and legal—“as if the news being shared was meant for other lawyers.”

Currently, 67 percent of lawyers are managing their own social media, while 23 percent get some help, and 10 percent hire someone else to do it all for them, according to the Attorney at Work survey.

Keith Strahan, managing partner with Strahan Cain in Houston, hired a marketing company about a year ago to blog, post and build his firm’s brand online.

“We are able to focus on the things that make us money and build relationships with clients,” says Strahan, who uses Ashley Johnson of Mouth Marketing to do his social media. “We have grown tremendously with the help of someone building our network through social media.”

And Kenneth Kossoff, a partner with Panitz & Kossoff in Westlake Village, California, started paying a social media consultant in Los Angeles $1,100 monthly to manage his Facebook page and take care of his firm’s voice, strategy, content and curation.

“For those people who follow us, we are being kept at the top of their mind,” Kossoff says. “We also are getting more inquiries from people who say they are calling from internet searches.”

This article was published in the May 2018 issue of the ABA Journal with the title "Outside Help: Studies show most lawyers don’t know how to advertise effectively on social media, so some have hired specialists."