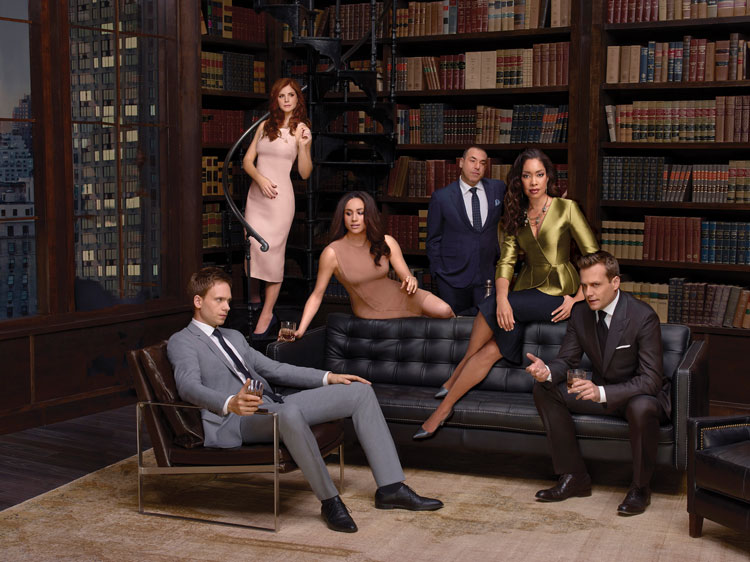 The cast of USA Network's "Suits" sports the trendiest in attorney attire. Photograph by USA Network.

It wasn’t long ago that professional dress for lawyers was constrained and predictable. Womenswear was derivative of menswear, closets were full of monochromatic color schemes, and nude pantyhose or a jacket and tie were part of the daily uniform. It was an era of boxy-shouldered suits, when business casual was an oxymoron and dress codes were often strictly enforced.

These days, legal fashion has loosened up. Depending on where you live and your practice area, women are sporting sleeveless dresses at work and men are wearing dress shoes with no socks.

“We have a generation that has never worn pantyhose in their life, and that’s great,” says Tasha Brown, an attorney and business development executive at DLA Piper’s Chicago office. “I remember going to stores and stocking up on nude hosiery—that was what you did. That’s a change and a welcome one. I also see more color and flair where everything used to be navy and black. That’s nice—it’s good to have pops of color where we didn’t even have those before.”

Traditionally, lawyers have been among the most conservative dressers around (along with bankers and accountants) with the goal to err on the side of formality. Although there hasn’t exactly been a sea change in the underlying dress principles, there has been a growing trend toward comfort and style, which many are embracing. 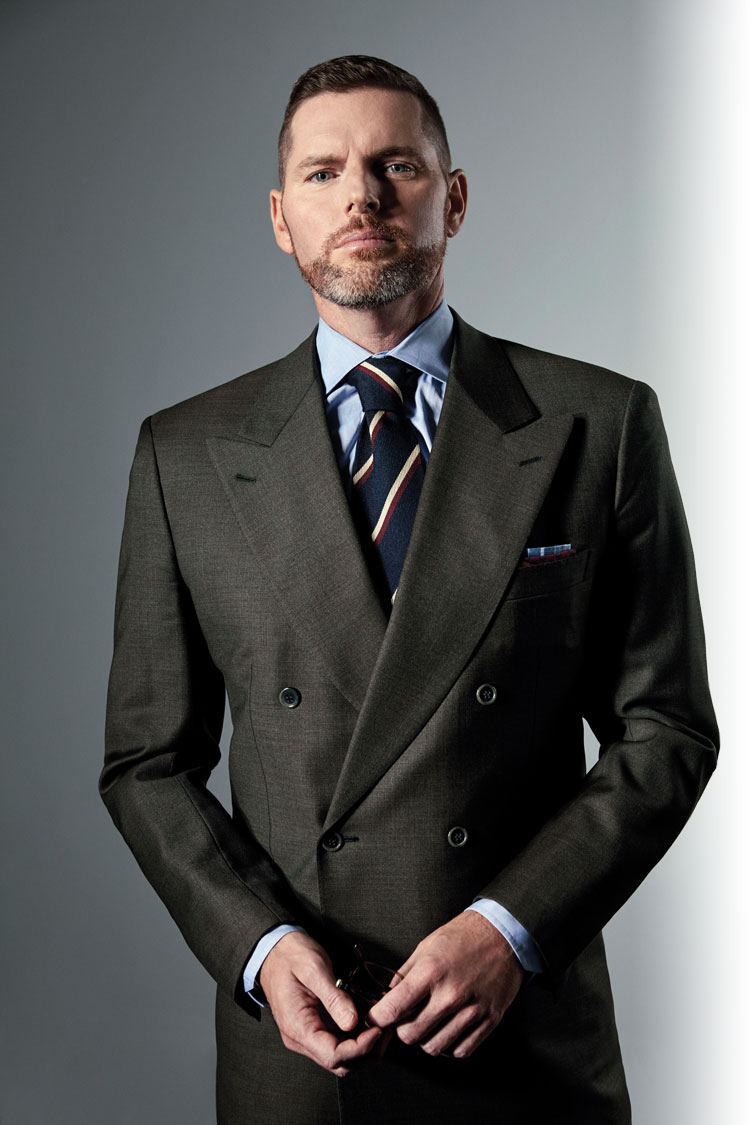 Douglas Hand: “Casual Friday has given way to a casual workplace in a lot of offices and has thrown many men into a state of confusion.” Photo courtesy of Hand Baldachin & Amburgey.

The changing fashion landscape prompted attorney Douglas Hand to pen The Laws of Style: Sartorial Excellence for the Professional Gentleman. The book, which was recently published by the ABA, is a lighthearted primer for men on better wardrobe choices, providing guiding principles on how to present yourself to enhance—and advance—your career.

“We’re at this inflection point aesthetically where business norms in manners of dress have changed,” says Hand, a partner at Hand Baldachin & Amburgey in New York City. “Casual Friday has given way to a casual workplace in a lot of offices and has thrown many men into a state of confusion.”

For men who find business casual too challenging, Hand has a solution: Wear a suit and tie. “It’s also the perfect vessel for men. Our problem areas, bodywise, suits solve. [Suits] attempt to reduce the male body to perfect balance—shoulders wider than the middle. You never know when you’re going to meet a client or a potential client, so wearing a suit rarely serves you wrong.”

Hand warns against copying the business-casual trends seen in other industries, such as the ubiquitous polo shirt and khakis favored by certain tech execs; he says it doesn’t translate.

“Everyone needs to do it better,” Hand says. “Inherent cavalierness in dressing like that says to a client, ‘Hey, my job is so easy, any slob can do it.’ ”

FROM CASUAL TO COUTURE

“Michelle Obama gave us both arms and legs,” says Susan Scafidi, the founder and director of the Fashion Law Institute and a law professor at Fordham University. “The first controversy was her eschewing stockings, then the much louder controversy over her showing her fabulous biceps. In her official portrait, she wore a sleeveless dress. She made it safer for American women to show their arms in a more formal setting. You might wear a jacket to court, but we don’t have to wear one all the time to show our strength—the arms will do it for us.”

Fictional lawyers also are leading trends, like the characters on the popular USA Network show Suits. Set at a law firm in New York City, the show puts fashion front and center, boasting that the characters’ “winning wardrobes ... make them the sharpest team on television.” The show’s website provides a sartorial shopping guide from each episode for those who can afford to splurge on Balenciaga, Gucci or Tom Ford. 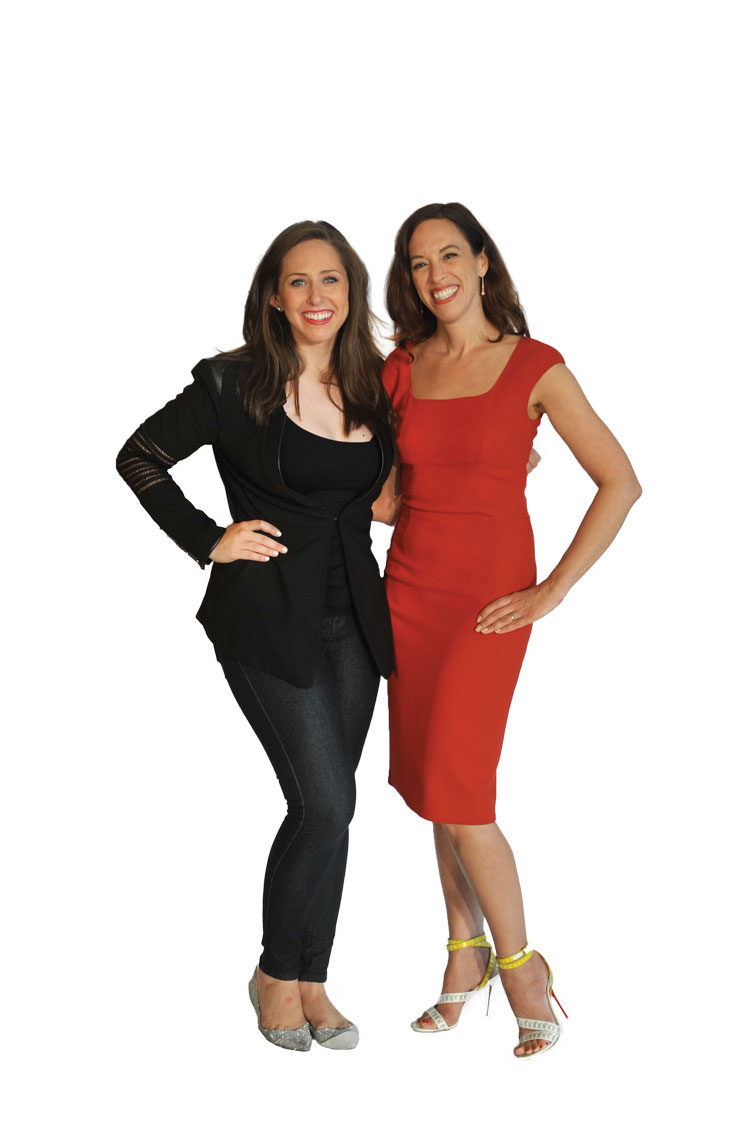 For the women on Suits, Andreatta says she uses a lot of consignments. “The clothes are recycled, which is wonderful, and they’re insanely good quality. I find Dior, Chanel—and I use a lot of it—but it’s consignment.”

Andreatta suggests scouring vintage stores and online sites to add personality and to find designer pieces at a fraction of the cost. “Never be afraid of tailoring: Don’t be afraid to take it in and cut it up. If a jacket is too long, don’t be afraid to cut 5 inches out of it. Or you could cut a lapel down” to update a look and fit, she says.

Andreatta began her career styling attorneys more than 20 years ago, when she and a friend would take racks of clothes into law firms and talent agencies. She says times have changed—the palette has expanded, allowing lawyers more license to inject fun elements into their wardrobes.

“Women lawyers I meet want to wear the items from Suits,” Andreatta says. “You want to look beautiful but not provocative. Even seven years ago, women were dressing to fit in, to challenge men—and that was their way to compete with their colleagues. Now, it’s stronger and more to their benefit to just be women.”

Female attorneys aren’t the only ones who can find areas of self-expression through fashion. On Suits, Andreatta allows the personality of the male characters to shine through in a variety of ways. She adds romanticism with a decorative pocket square; others are dressed in vintage ties or bespoke, Savile Row-style suits.

Andreatta says the shirts for the male characters are custom-made; and the tailor she works with in Toronto, where the show is filmed, has dozens of lawyer clients who order custom suits and shirts. “It’s talent and craftsmanship that was starting to go away, and it seems to be coming back again,” Andreatta says, noting that this sort of patronage also supports the artisans who make the clothes.

This article was published in the February 2018 ABA Journal magazine with the title "What Suits You? Lawyer fashion evolves to reflect both personality and tradition."