Lawyer With 'The Dragon Tattoo': Business on Track to Pass Sony in Foreign Film Grosses 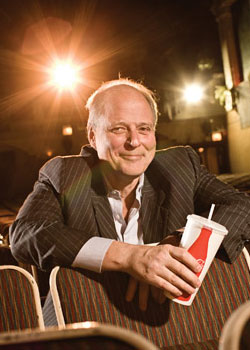 William Schopf is in the spotlight as the owner of Music Box Films. (Photo by Saverio Truclia)

Attorney William Schopf’s fall schedule included a working trip to the Toronto Film Festival in September and preparation for a major trial starting in November. “I haven’t had the situation yet where I have to tell the judge, ‘I need a continuance because I’ve got to go to Cannes,’ ” he says, but one can imagine such a conflict in his future.

That’s because the 62-year-old co-founder of Schopf & Weiss in Chicago takes more than a passing interest in cinema. Twenty-four years ago he bought a building that houses a jewel box of a movie house, the historic 750-seat Music Box Theatre in Chicago. One investment led to another, and today his movie business is on a winning streak.

Music Box Films, an independent distributor he started three years ago, snared the U.S. distribution rights to the Millennium trilogy, the Swedish-language films based on the late Stieg Larsson’s best-selling crime novels. The first film of the three, The Girl with the Dragon Tattoo, grossed more than $10 million within six months of its U.S. release in March, a big number for a foreign film here. That helped put Music Box on track to surpass Sony Pictures Classics in 2010 as the top-grossing U.S. distributor of foreign films.

Every morning these days Schopf checks the overnight box-office results from a movie data service to see how his films did. “It’s addictive,” he says.

Art house cinema would seem at opposite poles from business law, but Schopf navigates both worlds with flair. He’s not a showman, but he understands the value of a dramatic gesture.

For example, fresh out of Cornell Law School in 1973 and volunteering at a Chicago legal clinic, he questioned a plainclothes police officer testifying against his client. The officer testified he had flashed his badge to identify himself. Schopf pulled out his wallet, flashed his driver’s license and asked the officer to describe what he had seen. The officer couldn’t; the client was acquitted.

CUT TO A NEW SCENE

In 1979, Schopf left his position at Price, Cushman, Keck & Mahin and moved as a partner to Reuben & Proctor. He struck out on his own in 1987 with a younger colleague, Steven A. Weiss. Schopf’s real estate investing gave him confidence to take risks, he recalls: “I could say to myself, the firm might fail but I’ve got the real estate, or if the real estate failed I’d have the firm.”

In fact, both businesses flourished. Schopf & Weiss, with 21 attorneys, is a highly successful commercial litigation firm specializing in complex cases. Over the past 15 years, Schopf has successfully led more than 11 major jury trials involving issues ranging from international trade and price-fixing to legal malpractice and fraud.

“I like a learning curve,” Schopf says. “Every new case involves learning a new industry, so that’s been great.”

The same can be said of his investments. When he bought the Music Box building, attracted by its 34 apartments and eight storefronts, the theater was an anchor tenant. In 2003, Schopf took over the operations of the theater business after the owners retired and none of the prospective operators had deep enough pockets.

In 2006, he approached Music Box program director Brian Andreotti about expanding. “Running this little independent theater is OK by me, but it doesn’t give you guys any opportunity,” Schopf recalls saying. “We needed to expand horizontally [by buying other theaters] or vertically” into distribution.

Their exploration led to a meeting in New York with distribution specialist Edward Arentz, who tried to dissuade Schopf. “But he was undeterred,” recalls Arentz, now managing director of the business. “He has a high tolerance for risk.”

The pair announced Music Box Films at Cannes in 2007, where they bought rights to their first movie. The next year, Music Box had its first hit, grossing $6.2 million with the U.S. release of the French thriller Tell No One. That helped them land the Millennium films last year, when awareness of the novels was beginning to build in the U.S. The business will gross more than $20 million in 2010, but continued success is by no means assured.

His risk-taking isn’t limited to movies. He developed a retreat center on an island south of Rio de Janeiro. His idea was to attract “people doing interesting things,” he says. Closer to home, in one of his buildings in Chicago, he operates a contemporary art gallery with curator Aron Packer.

Music Box is Schopf’s major focus outside his law practice, though he is hard-pressed to say what percentage of his time he devotes to each. “I’m determined at this stage of my life that whatever I do, it’s going to be fun. None of it’s a burden, so I don’t really track it.”

When he was younger, Schopf believed decisions about what activities to pursue necessarily limited future options. “I thought that choices foreclosed opportunities, but I learned it’s just the opposite,” he says. “Even failure brings opportunities. There are always more doors.”