Lawyers engaging in debt collection may be regulated by a New York City ordinance, say courts 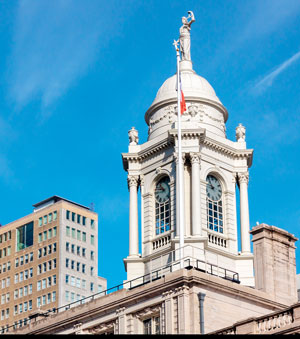 The New York Court of Appeals has ruled that a New York City ordinance regulating lawyers who serve as general debt collectors does not intrude upon the state's authority to regulate attorney conduct and the practice of law.

The Court of Appeals, New York's highest court, issued its decision June 30 in Berman v. City of New York (PDF). In a 4-2 decision, the court determined that the law was not pre-empted by state laws regulating attorneys. "There is no express conflict between the broad authority accorded to the courts to regulate attorneys under the judiciary law and the licensing of individuals as attorneys who are engaged in debt-collection activity falling outside of the practice of law and, thus, the local law does not impose an additional requirement for attorneys to practice law. Rather, the regulatory schemes can be seen as complementary to, and compatible with, one another."

In 1984, the New York city council enacted Local Law 65, which required debt-collection agencies to obtain a license to operate in the city. In its original version, the ordinance excluded attorneys. But in 2009, the city council enacted Local Law 15, amending the original ordinance. One of the key changes was to include lawyers who were acting as ordinary debt collectors rather than those attorneys who were “collecting a debt as an attorney on behalf of and in the name of a client solely through activities that may only be performed by a licensed attorney.”

The amended ordinance provides that “any attorney-at-law or law firm … who regularly engages in activities traditionally performed by debt collectors” must obtain a license from the New York City Department of Consumer Affairs.

In 2010, two law firms challenged the ordinance in a lawsuit filed in the U.S. District Court for the Eastern District of New York, contending that the debt-collection ordinance was pre-empted by state laws, particularly the judiciary law, which gives the state courts broad authority to regulate the practice of law. The plaintiffs also asserted that the ordinance violated the New York City Charter and made other constitutional claims, including an argument that the law was unconstitutionally vague. The plaintiffs maintained that it was unclear when attorneys were subject to the law and when they were exempt.

In 2012, the district court ruled that the ordinance was pre-empted by the judiciary law. The city appealed that ruling to the 2nd U.S. Circuit Court of Appeals at New York City, which certified two questions to the New York Court of Appeals: Did Local Law 15 constitute an unlawful encroachment on the state’s authority to regulate lawyers? And if Local Law 15 was not pre-empted by state law, did it violate the New York City Charter?

On Aug. 5, the 2nd Circuit issued its own ruling (PDF) that essentially affirmed the findings of the New York Court of Appeals. “Consistent with the Court of Appeals’ opinion, we conclude that the district court erred in finding that Local Law 15 impermissibly interferes with the state’s authority to regulate attorney conduct,” the circuit court says in its opinion. The 2nd Circuit also held that Local Law 15 does not conflict with the New York City Charter.

In its ruling, the federal appeals court vacated the judgment of the district court in relevant part and remanded the case for further proceedings consistent with its opinion. But the only issue that might give the district court room for further consideration is whether the plaintiffs have standing to pursue their arguments that Local Law 15 is overly vague.

Supporters of the ordinance, including consumer advocates, are pleased with the outcome of the litigation over Local Law 15.

Carolyn E. Coffey, a supervising attorney for MFY Legal Services Inc. in Manhattan, which filed an amicus brief in support of the ordinance, says: “It is very helpful for consumers to get to know about the debt they allegedly owe. When a law firm is the collector, there is a tendency for consumers to not get much in-formation. Before this law, there was no obligation on the part of law firms to provide substantive information to consumers that they needed.”

Coffey says the ordinance is “empowering for consumers because it forces debt collectors to provide them with important verification and documentation of debts.” Furthermore, she says, “if the law were deemed to be pre-empted, then it would create an incentive for debt collectors to engage in deceptive nonlitigation activities behind the shield of attorney conduct.”

But the National Association of Retail Collection Attorneys maintains that the courts failed to appreciate the uncertainty created by the ordinance.

“The 2nd Circuit’s opinion is consistent with the answer given by the New York Court of Appeals to the questions certified to it,” says Brent Yarborough, a NARCA board member and chair of the association’s Federal Government Affairs Committee. “But I believe the New York Court of Appeals erred because it failed to recognize that attorneys representing creditors regularly contact debtors by mail and phone, and that these contacts are a necessary part of an attorney’s representation of a creditor client.”

Yarborough says that, as applied to attorneys, “I believe Local Law 15 goes too far because it forces New York-licensed attorneys who represent creditors to either register their firms as debt collectors in New York City—plus every other municipality that passes a similar local law—or avoid doing those things that non-attorney collectors can do, such as making phone calls or sending letters. Restrictions on creditor-attorney communication could lead to more lawsuits and fewer out-of-court settlements, which will have a negative impact on consumers. Also, it is very difficult for a small law firm, and especially a solo practitioner, to comply with certain aspects of the law, such as the requirement to provide a callback number to a phone that is answered by an actual person.”

Yarborough also insists that there already are enough rules in place to address the activities covered by Local Law 15. “New York attorneys are already subject to New York’s judiciary law and New York’s Rules of Professional Conduct,” he says. “Furthermore, attorneys who regularly collect consumer debt on behalf of creditor clients are subject to the Fair Debt Collection Practices Act. Finally, the New York Court of Appeals recently promulgated new rules that apply to consumer credit cases. It is difficult to see how Local Law 15 provides additional protection for consumers that justifies the tremendous costs and burdens imposed on attorneys who represent creditors in accordance with the laws and rules already in place.”

Zaleon, however, insists that the ordinance serves important purposes for consumers. “Debt collectors should not, and cannot, be able to evade the consumer protection requirements by organizing themselves as law firms.”

This article originally appeared in the December 2015 issue of the ABA Journal with this headline: “Plumb Local: Two courts agree that lawyers engaging in debt collection may be regulated by a New York City ordinance.”