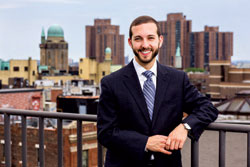 Rabbi Jeremy Stern heads an organization that advocates on behalf of women trapped in religious marriages. Photo by Adam Lerner.

An Orthodox Jewish woman came to the Brooklyn home of Rabbi Mendel Epstein last August with a tale of woe. She said her marriage was over and her husband had disappeared, perhaps to South America, but he wouldn’t grant her a religious divorce.

Under the strict interpretations of Jewish law followed in Orthodox Judaism, only the husband can grant a divorce document, called a “get.” Without it, the woman is still religiously married, regardless of how long it’s been since the civil divorce.

And that means she can’t remarry and have more children, lest she be declared an adulterer and her children from the second marriage be shunned by the Orthodox community. Women in this situation can be trapped for years or even decades, unable to move on as their childbearing years tick away. In Hebrew, many call them agunot, or “chained women.”

Epstein had a reputation in the Orthodox community as an advocate for women; he had recently published a “Bill of Rights of a Jewish Wife.” Yet he had a darker reputation for the way he dealt with recalcitrant husbands. In this meeting, Epstein expressed his tactics: “Basically, what we are going to be doing is kidnapping a guy for a couple of hours and beating him up and torturing him and then getting him to give a get.”

His comments were recorded because the woman and her “brother,” also in attendance, were undercover FBI agents. Epstein and nine companions were arrested last October at a deserted New Jersey warehouse as they waited for the husband. As of mid-June, four had pleaded guilty to kidnapping and extortion-related charges. Epstein and three others have been removed from that case and indicted for multiple get-fueled kidnappings. Two more remain in the original case.

The case drew national attention, in part because of the contrast between the promised violence and the pious image of a rabbi. Indeed, Jewish scholars say rabbinical authorities don’t authorize the vigilantism alleged in the case.

But the problem of “chained women” is real and serious, say members of the Orthodox Jewish community. Reform Jews don’t require a get and Conservative Jews have found solutions they believe adhere to Jewish law. But among the Orthodox, it’s not unusual to see references to “the agunah crisis.” The Beth Din of America, one of the country’s major rabbinical courts, located in New York City, calls it “one of the great crises of Jewish life in modern times.” Less than 2 percent of Americans identify themselves as Jewish by religion, and of that amount 10 percent say they are Orthodox, according to a 2013 Pew Research Center survey.

The religious nature of the problem complicates efforts to find a solution. Religious courts have no enforcement authority in the United States, and the First Amendment prevents secular courts from intervening in purely religious disputes. Jewish authorities also criticize secular enforcement as contravening Jewish law. And among observant Jews, there’s a prohibition on using secular courts against other Jews, which discourages parties from seeking secular help.

Rabbi Michael Broyde, an Emory University law professor who has written extensively about the agunah problem, says the dual religious and secular systems contribute to it. “Having decided as a society that we do not want to empower religious courts, we should not feign surprise that they are powerless,” Broyde says.

Orthodox Jewish men don’t suffer the same consequences for “adulterous” second marriages as women. This is partly because ancient Jewish law permits polygamy, so their children aren’t shunned. As a result, husbands may feel they have nothing to lose from staying married.

And they may have something to gain. The Organization for the Resolution of Agunot, a Manhattan nonprofit, says husbands generally deny a get to extract large cash payments, win concessions on property division or child custody, or to spite or control the wife. Though not every marriage ORA handles was abusive, get refusal is almost always contentious, according to Rabbi Jeremy Stern, who runs the group.

“It’s an act of trying to control or dominate the other party, and to manipulate them,” Stern says. “Usually, the refusal to give a get is the last form of abuse after many abusive acts that she has suffered at the hands of her husband.”

That’s a controversial statement in the Orthodox community. Husbands and their supporters might say get refusal is the only leverage they have against an unfair settlement, or that they need the money to pay divorce bills.

A rabbinical court may order a husband to deliver a get if its three-rabbi panel agrees that there’s good cause. But it has little enforcement authority other than an order allowing the Jewish community to shun the offender. And Stern says this is hard to enforce in the 21st century.

“Now you have such widespread Jewish communities throughout the world that if a rabbinical court says the guy should be banned or banished or boycotted or whatever, they’ll move to another town, another community, another synagogue, another rabbi,” he says.

Beverly Hills, California, lawyer Alexandra Leichter, who was raised Orthodox and attends an Orthodox synagogue, has represented agunot since she set up her family law practice in the 1970s. As one of the few attorneys familiar with the issue, she fields calls from colleagues around the country seeking help.

Leichter advises attorneys representing Orthodox Jewish women to secure the get before even opening a civil divorce case. This prevents the husband from using the get as a bargaining chip. It also prevents another common problem: rabbis stepping in to negotiate large cash payments in exchange for the get, undermining her efforts in secular court.

But even if the civil divorce is already underway, Leichter says, attorneys still have options. California is a community property state, so Leichter can’t ask judges to give her clients a greater share of the marital property. But she can ask for lifetime spousal support, reflecting the client’s inability to remarry without a get. She also might ask for a greater share of child custody, arguing that the husband’s recalcitrance is setting a bad example for the children.

By contrast, New York is an equitable distribution state, meaning judges are free to award a greater share of property to an agunah. In fact, the state of New York has a law expressly permitting judges to do so—known as the 1992 get law. That’s one of two New York laws passed expressly to prevent agunah situations. The 1983 get law denies a civil divorce to any plaintiff who does not make a sworn statement that he or she has removed all barriers to the defendant’s remarriage.

But neither law is a panacea, Stern says: The husband is not necessarily the plaintiff in a divorce, and judges don’t often use the 1992 law or award a nominal amount. In addition, some rabbis believe court interventions force a get, which must be freely given to be valid.

That’s part of why Stern believes secular court is only of limited use. To resolve individual cases, ORA occasionally uses lawsuits or intervenes in family court cases.

But the legal remedy Stern really likes—and the one most widely accepted in the Orthodox community—is a prenuptial agreement published by the Beth Din of America. It’s actually a binding arbitration agreement in which the spouses agree to arbitrate marital disputes, and the husband agrees to pay the wife a set amount per day until he grants a get.

This works religiously because a Jewish husband is obligated to support his wife. And it’s enforceable in secular courts just like any other arbitration contract. The Superior Court of Connecticut ruled in 2012 in Light v. Light that it was enforceable despite its religious character.

Leichter is not afraid of unconventional takes on Jewish law. In fact, until the Orthodox rabbinate finds something better, she advocates the most unconventional solution of all: Young women shouldn’t use the Orthodox Jewish marriage ceremony. Or if they do, she says, they should realize that it puts them at the mercy of their husbands.

In any case, while Leichter does not know of legal malpractice cases, she says being aware of the problem and of possible solutions may keep attorneys from being at risk.

This article originally appeared in the August 2014 issue of the ABA Journal with this headline: “Women in Chains: Lawyers look for secular solutions to the Jewish divorce problem.”