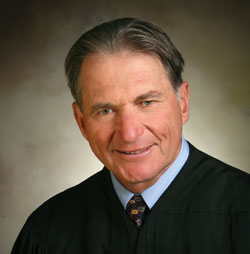 Chief Judge Richard Brown: “I think I’ve managed to persuade any doubters that a hearing disability is no bar to being a good judge.” Photo courtesy of Wisconsin Second District Court of Appeals.

Last August, the White House blog posted an infographic touting the diversity of President Barack Obama’s nominees to the federal bench. Those nominees, stated the blog, “embody an unprecedented commitment to expanding the racial, gender and experiential diversity of the men and women who enforce our laws and deliver justice.”

The blog posting cited several among the president’s nominees, including Sonia Sotomayor, the first Latina on the Supreme Court; the first openly gay man confirmed by the Senate to serve as a district court judge; and the first women of Chinese, Korean and Vietnamese descent to be nominated to the federal bench. The post documented the administration’s efforts to add more women, African-Americans, Latinos, Asian-Americans, Native Americans and openly gay people to the federal judiciary.

In October, ABA President Wm. T. (Bill) Robinson III—who has made disability rights one of his top priorities—followed up that letter to Ruemmler with one of his own (PDF). In it, he commended the administration on its diversity efforts to date but also urged the White House to evaluate its current vetting procedures to ensure that qualified candidates with disabilities aren’t inadvertently being excluded from consideration.

“To build on this administration’s successful efforts to diversify the bench, we encourage you to evaluate current vetting procedures to further ensure they fully include disabled individuals seeking a judicial nomination and that there are no barriers or unintended bias that would in any way inhibit the nomination of disabled men and women with stellar professional qualifications to lifetime positions on the federal bench,” wrote Robinson, the member in charge of the Florence, Ky., office of Frost Brown Todd.

Robinson also invited the White House to send a representative to the ABA’s Third National Conference on Employment of Lawyers with Disabilities “so we may work together to ensure that attorneys with disabilities are full participants in the legal profession.” The Commission on Disability Rights will host the conference May 7-8 in Washington, D.C.

People with disabilities, their advocates and specialists in the field make up a varied community. A disability is broadly defined as a significant physical, sensory or mental impairment or condition that includes people with diabetes, cancer, multiple sclerosis, bipolar disorder and post-traumatic stress disorder.

But while that segment of the population adds up to millions, the number of federal judges who publicly identify themselves as disabled probably could be counted on the fingers of one hand, says Richard S. Brown, a Wisconsin appellate judge in Waukesha and a member of the Disability Rights Commission.

Brown, for instance, guesses that he may be the only deaf judge in the United States. “I’m one of the very few, that’s for sure,” he says.

Brown, who lost his hearing after he became a judge—he is now chief judge of Wisconsin’s Second District Court of Appeals—says his experience belies perceptions in some quarters that people with disabilities lack the necessary at tributes to be an effective judge. “I think I’ve managed to persuade any doubters that a hearing disability is no bar to being a good judge,” he says.

Brown says there is a simple argument for including people with disabilities in efforts to diversify the judiciary at the federal and state levels. “Everybody has something different to offer,” he says.

That’s one of the reasons why the Disability Rights Commission changed the language of its voluntary diversity pledge last year.

The pledge, created by the commission in 2009, now has at least 125 signatories. By signing the pledge, law firms and other legal employers affirm their commitment to diversity and to include people with disabilities in those efforts. The changes are designed to make it clear that the pledge applies to the judiciary and court administrators as well as law firms and other legal employers.

The resolution also urges the LSAC to make sure that the application process, scoring and reporting of test results do not differentiate between test-takers who did and did not receive an accommodation for a disability. The commission’s resolution was supported by 35 co-sponsors.

But the ABA still has room for improvement in its own diversity efforts to include those with disabilities, according to the commission’s most recent status report on the participation of lawyers with disabilities.

The report, released just before this year’s midyear meeting, found that the number of ABA members who identify themselves as disabled dropped since the 2010-11 ABA year—from 6.87 percent to 4.56 percent. The number of lawyers with disabilities in leadership positions also dropped in the past year, from 34 to 23.