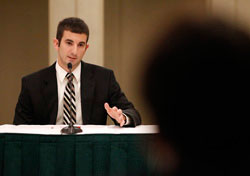 The governing council of the ABA Section of Legal Education and Admissions to the Bar tentatively approved three more chapters of proposed amendments to the law school accreditation standards.

The council, which met during the annual meeting, voted to post the proposed changes to chapters 1, 3 and 4 of the ABA Standards and Rules of Procedure for Approval of Law Schools for notice and comment.

Chapter 1 deals with general purposes and practices. Chapter 3 covers the program of legal education, and 4 has to do with the faculty.

The most significant of the proposed changes would involve job protections for full-time faculty members. The council, after a lengthy debate, voted to send out two alternatives to the current standard, which is widely understood to require tenure or a comparable form of security of position for all full-time faculty members, except for clinical professors and legal writing instructors.

The first alternative, favored by a narrow plurality of council members, would require law schools to provide some form of security of position (short of tenure) to all full-time faculty members, including clinical professors and legal writing instructors. The other, which was a close second, would not require any form of security of position for anyone, but would require law schools to have policies and procedures in place to attract and retain a competent full-time faculty and to protect academic freedom.

Other tentative changes approved by the council would increase the experiential learning requirement in the standards from one credit hour to six credit hours; increase the amount of credits law students may receive from distance learning courses from 12 to 15; and eliminate the current requirement that the student/faculty ratio be considered in determining whether a school is in compliance with the standards.

The council also narrowly approved a proposal to push back by a month—from Feb. 15 to March 15—the date on which law schools measure graduate employment outcomes and to move the deadline for reporting employment outcome data from March 15 to April 7.

Also during the annual meeting, the Task Force on the Future of Legal Education got an earful of reaction to the findings of the working paper it issued earlier.

Much of the response was favorable. But all eight of the people who spoke at the task force’s last scheduled public hearing had specific suggestions for things they’d like the task force to include in its final report.

Suggestions included taking an in-depth look at the federal government’s role in legal education pricing, having the task force create its own list of core competencies rather than leave it to colleges, and focusing more on technology.

Kyle McEntee, executive director of Law School Transparency, called the working paper a “tremendous piece of thought leadership” that contains many important recommendations. The big question now, McEntee said, is whether stakeholders will have the will to execute the task force’s vision. “I’m skeptical but I’m optimistic,” he said.