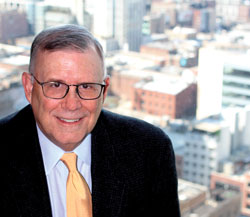 Barry A. Currier is stepping into the key staff position supporting the work of the ABA Section of Legal Education and Admissions to the Bar at a particularly difficult and challenging time for law schools, recent graduates and the profession in which those new lawyers are trying to find work.

Law school applications are way down—by 20 percent from 2012 to this year, reports the Law School Admission Council—due in part to a growing realization among prospective students that a high-priced law degree is no guarantee of a well-paying job in the legal field after graduation.

Administrators are looking for ways to cut costs as they face lower admissions—the LSAC reports a 7.7 percent drop from 2010 to 2011. Some law schools are entertaining a number of possible alternatives to the traditional three-year model. Meanwhile, law firms mired in a sluggish economy are asking schools to provide more of the kind of practice-related training and real-world skills that new associates used to get on the job.

The legal education section, whose council is recognized by the U.S. Department of Education as the national accrediting body for programs that lead to a JD degree, is in the middle of the growing debate over how law students should be educated and how their job prospects can be improved.

But Currier, whose legal resumé includes stints as a practitioner, a professor, an associate dean, a dean and a regulator, seems undaunted by the challenges ahead. “I have a lot of experience in this field,” he says. “And I hope that gives me the kind of perspective to help the council, our key committees and the volunteers do what we can do to deal with the challenges we face.”

“The council decided that, at a time when legal education must deal with fundamental changes in both the legal profession and higher education, Barry Currier has the right combination of skills, vision and determination,” said Syverud in the statement. “He will make sure that the law school accreditation process allows room for innovation, while still ensuring that law schools offer rigorous education.”

While Currier’s appointment comes with a new title, the responsibilities of the position will remain essentially the same. “Currier’s title as managing director, rather than consultant, reflects the increasing importance and scope of the section’s regulatory role,” said Syverud and Rives in their statement. “The title change will not affect the variety of activities and programs that the section offers to support the work of law schools and their faculties and administrators.”

One of Currier’s key tasks will be to support the council and the Standards Review Committee as they complete their efforts to evaluate and update the Standards and Rules of Procedure for Approval of Law Schools. The project, in its fourth year, may be at least another year from completion. But Currier emphasizes that his role is not to make policy. “I have my own views on things,” he says, “but I don’t have a vote in any of this.”

Currier says he wants to promote the importance of the accreditation process and the job the section is doing to make it more effective and efficient. “We don’t do enough to talk about what a valuable service the section provides to prospective students, law schools and the profession,” he says.