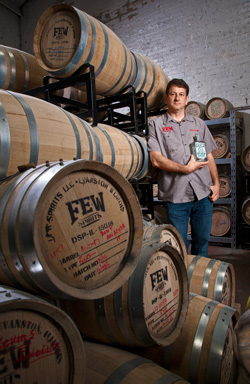 Paul Hletko used his legal skills to effect changes in his hometown’s regulations so he could open a distillery and still be close to family. Photo by Wayne Slezak.

Plenty of lawyers decide to make career changes and leave the legal world behind, but few use their legal backgrounds to help them do it.

Patent attorney Paul Hletko is in that minority. Hletko started production at Few Spirits—a craft distillery that makes white whiskey, rye, gin and bourbon—in his hometown of Evanston, Ill., last year. He had dabbled in home brewing for years before he decided to take his hobby to the next level and open Few as an ode to his late grandfather, who had a brewery in Czechoslovakia until the Nazis seized it during World War II.

“I was growing weary of practicing law,” Hletko says, adding that he decided to focus on spirits because he felt the craft beer industry was too crowded.

The father of three wanted to open his distillery within walking distance of his home to be close to his family. But he faced one significant problem: Evanston is famously dry. The suburb just north of Chicago is where the Woman’s Christian Temperance Union was started in 1874 (Hletko named Few for Francis Elizabeth Willard, the former president of the WTCU). Alcohol wasn’t served in restaurants in Evanston until the 1970s, and there are still no bars. But that didn’t faze Hletko, who used his training as an attorney to get Evanston’s laws changed so he could produce alcohol there.

It took him about a year. Step one was getting the city to put a new class of liquor license, for micro-distillers, on the books. Then came getting the town’s zoning board to establish a generic “special use” provision to allow a distillery to operate with special permission in certain zoning classes. Next, he secured one of those zoning classes for his desired location. Finally, he got the health department to create a law allowing for distillation and food (for Few, that meant pretzels) without a commercial kitchen on site, which Evanston had previously required of establishments serving alcohol. “I saved a lot of money on legal fees,” Hletko says, estimating that it would have cost him more than $20,000 to hire an attorney for the work he did himself. “My background helped train me to avoid many problems—and solve the ones that did arise much more quickly.”

Production began at Few Spirits in June 2011, and business has been growing steadily since. The products—now sold in Chicago and Portland, Ore., as well as Seattle and Vancouver, British Columbia—have won several industry awards.

But Hletko isn’t resting on his laurels. He’s set his sights on getting the Illinois government to change laws that limit the amount of alcohol he can produce to 15,000 gallons a year—he wants that number bumped up to 60,000. If that happens, his legal expertise will help him fully retire from law (he’s practicing part time now). “I’m ready to make distilling my full-time career,” he says.