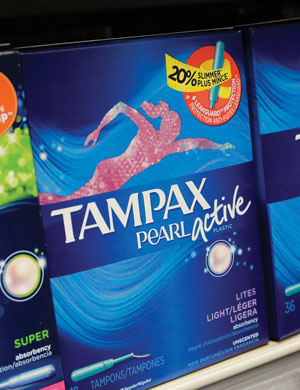 
“Basically, we are being taxed for being women,” Garcia said in a statement.

Despite the relatively small amount of money involved—California’s governor proposed a $170.7 billion budget for this fiscal year – the “tampon tax” is a catchy name and a catchy topic that’s gaining attention and ground nationwide for a serious reason. It’s estimated that a woman will spend some $3,000 on tampons, sanitary pads and other period-related paraphernalia over the course of her life. And California Assembly Bill 1561, known as the tampon tax repeal, is expected to spare California’s menstruating population an estimated $20 million per year, according to a press release from Garcia’s office.

In March, Chicago’s city council unanimously voted to scrap sales taxes on tampons and their ilk. The Illinois legislature is considering a bill to bring that policy statewide.

A similar bill was introduced in Connecticut in February. And Virginia also has introduced legislation to exempt feminine hygiene products from sales taxes.

“Taxing tampons and menstrual pads is not only a gender-biased injustice but irrational,” Connecticut state Rep. Juan Candelaria, the bill’s sponsor, said in a news release. “How is it that these essential items, purchased by half of the population, are not considered a necessity? We have to stop penalizing females.”

New York also seems headed toward the end of taxing tampons, either by a bill or through a lawsuit.

In Utah, however, an all-male legislative committee voted down a repeal in February.

Critics of AB 1561 and its counterparts—five states (Maryland, Massachusetts, Minnesota, Pennsylvania and New Jersey) already do not levy sales taxes on tampons—argue this exemption would eat into state revenues without providing much benefit. Some also worry about other special interest groups taking this bill as an opening, and then lobbying for exemptions of their own.

In a colorful Washington Post opinion piece called “The ‘Tampon Tax’ Fraud,” columnist Catherine Rampell proposed that in lieu of scrapping sales taxes on tampons – which would benefit both poor women and billionaires — it would be better “to just increase cash transfers to the poor—or to whichever group you think needs money the most.”

For her part, Garcia tells the ABA Journal that for many Californians, saving even a few dollars per month is a boon.

Garcia sees California’s tampon tax repeal as part of a series of efforts she intends to undertake, all focused on improving women’s health and remediating social inequities.

And getting people talking about periods—which Garcia has certainly done; even her mother’s been bringing them up – is a first step toward bringing women’s issues more generally into the public sphere.

“When we decided to do this bill, from the beginning I told staff: Whatever we’re doing is the foundation for a bigger discussion,” she says. “Let’s start with our periods.”

This article originally appeared in the June 2016 issue of the ABA Journal with this headline: “A Woman’s Tax: Legislators say taxes on feminine hygiene products are discriminatory.”