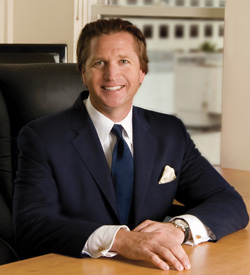 John Pankauski used to pay $1,500 a month to rent a small office with few amenities.

After some $100,000 in renovations, he and his staff now work in a 2,000-square-foot penthouse, complete with 14-foot ceilings, panoramic views of the water and easy access to restaurants, shops and the courts.

“We own about half the floor right now, and we’re going to try to purchase substantially more,” says Pankauski, who bought space in the historic Guaranty Building in 2009 as part of a short sale.

“If you’re going to be practicing law for 10 or 20 years, purchasing space is one of the most sensible things you can do,” says Pankauski, who paid about $117 a square foot, less than half the price it previously sold for in 2007 at the height of Florida’s boom. “It’s a good business decision.”

The merits of lawyers morphing into commercial landlords are up for debate, and real estate brokers say the decision hinges on factors such as a firm’s growth plans, cash flow and tax situation.

UPSIDE TO THE DOWNTURN

But even when they’re not buying, attorneys have been finding it hard to ignore sweet deals on premium office space that can give their practices a welcome facelift in the down economy. The falloff in real estate nationwide has left some smaller firms calling the shots on everything from custom build-outs to free parking.

“It seems that tenants are able to negotiate their own terms,” says Lisa Vari, a family law attorney who recently upgraded her Pittsburgh office, moving into a downtown penthouse location directly across the street from a county courthouse.

Besides doubling space, she now has her own kitchen, file room, balcony and outdoor deck.

“They made concessions on the monthly rent, agreed to remodeling, agreed to reduce the rentable square footage,” says Vari, who also found favorable leasing terms for a Miami location. “The impression that the client gets helps to aid you in showing the client your value.”

It’s no surprise deals like these abound. Yearly office foreclosure filings throughout the United States more than doubled from 2007 to last year, as reported by the industry research firm RealtyTrac.

And with an uncertain economic picture heading into 2012, it’s likely that outsize offerings will be around for a while longer.

“The economy helped give us many more options,” Kitrick says, noting the calming nature of the space helps put emotionally wrought clients at ease. “We got a lot more space in a spectacular building.”

Got a story idea you want to share? The ABA Journal wants to hear it. Send the info to [email protected].