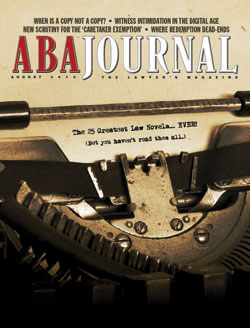 Regarding “Attorney as Healer,” August: This article made me smile. I am very aware of this movement and of many of the leaders, and have “integrated” integrative law into the fabric of my teaching at Quinnipiac University School of Law. Teaching about these sea changes in our profession excites me, and it motivates and inspires my students. I believe that this movement will grow and it will help to transform our profession into what it always has been at its core—a healing profession. And it aligns with other indicators that our world needs this shift to a collaborative, peaceful way of being. To see the ABA Journal helping to spread the word to a wider community is very good news. 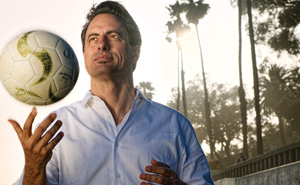 The adversarial approach to conflict resolution has been around for thousands of years. We can tweak it as much as we want, but it is still a rather ancient method. It is 2013 and about time we modernize our system of justice. Some things are too ancient to be modernized and instead require a complete overhaul from the ground up. The integrative law approach is the present for some and will be the future for all.

Regarding “The Rough Road to Redemption,” August: From personal experience, the reinstatement process was rigorous, demanding and humiliating in many respects. The “conditional reinstatement” process following it was also difficult.

Try starting every morning with a call to a drug testing system that lets you know whether you have to test that day (whether you have court appearances scheduled or not) and if you “forget” to call one time, it has the same impact as if you had been smoking crack. Bashful bladder syndrome was also considered a sure sign of illicit alcohol or drug use. Total time from reinstatement application until completion of conditional reinstatement: about six years. If this sounds like complaining, I assure you it is not. I’m extremely thankful for the opportunity, but want to paint an accurate picture for those contemplating whether to go through it or not.

After reinstatement, I’m still carrying my felony drug possession convictions, which show up every time opposing counsel do a background search and always make me wonder if my client is getting the benefit of a lawyer with the respect of others in his profession (sometimes the client questions this too).

Most of the time, I think not, so I put all the extra I can afford into the representation, in an effort to make up the difference. Then, after years of working 100 percent clean and sober with a mountain of self-doubt on my back, I get a phone call from a former federal prosecutor, relaying his conversation with the federal prosecutor, letting me know they have examined my background, found my convictions and decided to name me as a target in a white-collar conspiracy involving my biggest corporate client.

Would I do it all over again? Without hesitation. Why? Apparently because I have something in common with the 80-year-old guy who wants “lawyer” on his tombstone. Good people sometimes screw up and do bad things (usually associated with drug or alcohol abuse), and that includes good lawyers.

My experience is consistent with the statistics in that I have seen very few “bad” lawyers even attempt reinstatement and even less actually achieve it. Those that make it through are inevitably good to great lawyers who have made out-of-character mistakes. Bottom line: If you think you want to pursue reinstatement, do something else until you know in your heart that you want it. If you read about the 80-year-old dude and thought, “Hell, give me his number and I’ll represent him for free,” then what are you waiting for? You have it. When I was contemplating a plea to the possession charges, I asked a former president of the Kentucky Bar Association for his opinion of the impact this would have on my legal career. His reply explains in great detail all of the legal support for his opinion that avoiding disbarment would be impossible. For some unknown reason I listened to my rehab counselor, David Germany, who suggested that I apply for reinstatement anyway through the precursor to the Kentucky Lawyers Assistance Program. “Mission impossible” eventually became reality.

Your otherwise interesting list, “The 25 Greatest Law Novels Ever,” August, omitted what is probably the most intelligent, beautifully written and moving novel of the law. That book is Guard of Honor by James Gould Cozzens, published in 1948.

It is very disappointing that the best legal novel ever written, The Brothers Karamazov, is not on the list. Why???

Thank you for this great article. As a German/U.S.-educated lawyer, I thought also about the great novel written by Heinrich von Kleist, Michael Kohlhaas.

Little Fuzzy, one of the top science-fiction novels of all time, revolves around a court case on a significant legal issue.

Where is Wilkie Collins? Man and Wife is a masterpiece, sadly neglected, but it belongs up there with The Moonstone and The Woman in White.

Michael Connelly’s The Lincoln Lawyer and The Fifth Witness. Connelly is a former crime-beat journalist with a criminal defense lawyer brother. He gets the practice of law and trials better than anyone I’ve ever read, the bureaucracy of modern courts and the business side of law practice too. His prose is sharp, fast-paced and often funny in a manner that is not satiric but very real.

Also Henry Denker’s A Place for the Mighty and Judge Spencer Dissents.

Why no novels by the Boston attorney/journalist George V. Higgins, most of which involved criminal law, from The Friends of Eddie Coyle up through the Kennedy for the Defense series of novels? And why nothing by the prolific New York attorney Louis Auchincloss, such as The Embezzler and The Partners?

A Covenant with Death by Stephen Becker. And Laughing Whitefish, another book by Robert Traver. The next article should cover nonfiction books about great cases.

Presumably none of the judges have read anything by Michael Gilbert. Pity. Try Smallbone Deceased.

Having just read it, I cannot begin to imagine why Old Filth is on the list. In its place, I would nominate any of the three novels by the late Sarah Caudwell.

Homebrewing is most certainly not legal nationwide (“Legally Brewed,” August). In large sections of Alaska, it is actually a felony. I have clients serving years in jail for making a small amount of beer for personal use. These “crimes” are zealously prosecuted in this state, shocking as that may be to most Americans.