Letters: More for the Stage 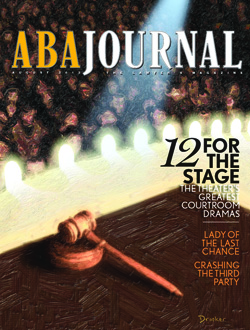 MORE FOR THE STAGE

Missing from your list of great courtroom dramas on the stage (“12 for the Stage,” August) is perhaps the best exploration onstage of the difficulties of perception in witness testimony: Rashomon. Better known as a film by director Akira Kurosawa, it also is a memorable stage play. Film star Ricardo Montalban made a marvelous bandit on stage. The Broadway production in 1959 featured Rod Steiger and Claire Bloom. In the play, three versions of a killing from witnesses with differing roles and points of view are plausible and inconsistent. Where is truth? Is there truth?

Being a former professor of drama and theater and currently a lawyer, I read with interest your list of the 12 greatest legal plays. Thank you for taking the time to formulate it. My one complaint is that Oedipus the King does not really belong on the list. There is no trial and there are no lawyers. In terms of modern genres it is more of a police procedural (with hints of the disasters lurking in self revelation that can also be found in Philip K. Dick) than a legal play.

The play you missed, and that could replace Oedipus, is Aeschylus’ The Eumenides, the third play in the Oresteia Trilogy.

This play really is the first and one of the greatest courtroom dramas: It is a kind of civil suit that the Furies bring against Orestes for killing his mother. Orestes is defended by Apollo, the Furies represent themselves (and actually best Apollo in courtroom argument), and Athena is either the judge or the jury foreman. The play takes a surprisingly prescient view of courtroom antics (such as subtle threats and bribes to the jury) and of the limits of the ability to solve deep social problems through legal action. I recommend it.

I enjoyed your article on courtroom plays. I think you missed one, though: The Devil and Daniel Webster. That was a tough jury.

Another play that became a movie and was outstanding was The Andersonville Trial, about the trial of the commander of a Civil War prisoner of war camp. George C. Scott starred in the stage version.

I would add The Winslow Boy, a stirring defense by a crusty barrister.

Some years ago I saw on Broadway a play titled Nuts. The play as I recall was essentially a hearing before a judge who had to decide whether to release a woman who was being held in a mental health/prison facility. I was quite impressed with it at the time, though if I saw it today my view might be different.

I would posit that Execution of Justice (by Emily Mann, I believe) also deserves a nod. It details the trial of Dan White, the man who shot Harvey Milk and George Moscone.

Conspicuously missing from the list is David W. Rintels’ masterpiece Clarence Darrow, a one-man Broadway show starring Henry Fonda and directed by John Houseman. Fonda was nominated for a 1974 Tony Award for best actor in a play, and the production won two Drama Desk Awards. One of the stage performances was taped for television and aired on NBC as IBM Presents Clarence Darrow. The television version won Rintels a 1975 Emmy for outstanding writing.

The stage version is still performed with some frequency and remains a remarkable and moving work. Not too long ago, Leslie Nielsen re-created the role in a national tour.

Hooray for adding Bryan Garner on Words (“Shall We Abandon Shall?” August).

As a judge, and hence an arbiter of the English language, I consider Garner to be the crown prince of legal writing. A monthly dose of Garner will chase away sniffles brought on by the end of McElhaney on Litigation.

In the government procurement universe, shall identifies a required capability of whatever the government is buying. The performance of each shall has to be verified.

Shall is not dead.

Must and will are terms describing objective situations. You must pass certain exams to earn a degree. But what is the contractual obligation if you say “Party A will travel to Japan. Upon his return, he will vacate his house and will transfer title to Party B.” Presumably, the parties wanted to impose a legal obligation on A to transfer title to B (shall being the appropriate term for this—it is not a must, because there is no objective necessity to do so; it is only a stipulation among the parties). Did the parties intend that A shall vacate the house, or was this only anecdotal because he wants to continue to use the house for his family (but transfer title)? Again, shall would make it clear that there was a legal obligation on A. The travel to Japan, finally, was only stated to make clear that the transfer would not take place right away. What if A does not travel to Japan? Of course, proper drafting would provide for a clear deadline for effecting the transfer of title. So indeed, shall shan’t be dead.

All legal writing would improve if done in plain English. The ABA has backed it, the Plain Writing Act of 2010 had unanimous backing of both houses. Yet few lawyers write in plain language.