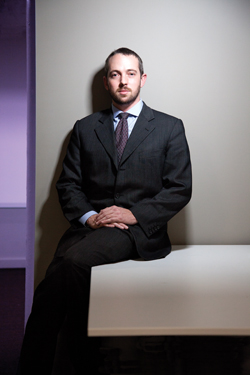 To Brooklyn bar owner Andrew Muchmore, New York City's 89-year-old cabaret law—which prohibits dancing in a venue that does not have a specific cabaret license—shows shades of Footloose-style censorship.


Muchmore, who also happens to be an attorney, is challenging the law on the grounds that it violates the First and 14th amendments. "This stands out as the most absurd law in New York City," says the owner of the eponymous bar/coffeehouse that regularly hosts live music. Other city laws and codes address the noise, crowding and safety issues that the cabaret law also purports to address, he says.

"The only practical effect of the cabaret law is to prohibit dancing and render dancing by more than two persons simultaneously unlawful in more than 99.9 percent of the eating and drinking establishments in New York City," states Muchmore's complaint, filed in a Brooklyn federal court.

Obtaining a cabaret license is also unnecessarily cumbersome, Muchmore says, requiring community hearings and the installation of expensive surveillance equipment. Fines for unlicensed activity such as dancing are $100 a day.

Because the law has Muchmore worrying about crossing the line between swaying and dancing at his club, he's considered avoiding acts like deejays, and hip-hop and salsa artists because their music is inherently danceable, he says.

But Robert Bookman, general and legislative counsel for the New York City Hospitality Alliance, says the law is worthwhile. Licenses are not hard to get "once you meet the zoning and safety requirements," he says. "Dance clubs have a different land use than restaurants or small bars do, so they're zoned more strictly. People's attention to their surroundings is different in a restaurant than it is in a nightclub. It makes sense."

Muchmore is not the first to challenge the cabaret license on First Amendment grounds. Bookman says others have failed because the U.S. Supreme Court does not consider patron dancing a constitutional right. "You can disagree, but that is the law," he says.

Muchmore hopes he'll be more successful by arguing that it's performing musicians whose rights are being violated. "This law prohibits the expression of musicians and of the venues by prohibiting certain types of danceable music," he says.

This article originally appeared in the January 2015 issue of the ABA Journal with this headline: “Life is a cabaret, old chum (but first you need a license): NYC lawyer and bar owner sues over cabaret licensing requirement.”