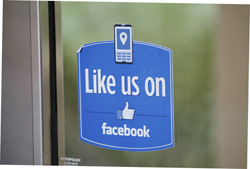 A judge has given a thumbs-down to the Facebook “like,” leaving some rather puzzled. Photo by AP Photo/Paul Sakuma.

When Hampton, Va., Sheriff B.J. Roberts faced re-election in 2009, he discovered that several of his employees had backed his opponent, Jim Adams. A former lieutenant colonel in the sheriff’s office, Adams knew each of the employees and attended a cookout with them. One of the employees, Daniel R. Carter, pushed the “like” button on Adams’ Facebook page.

Roberts told the workers they should get on the “long train” with him rather than ride the “short train” with Adams, according to a recent court decision. The workers claimed that Roberts used employees to back his re-election efforts, manage his political activities, and sell and buy tickets to campaign fundraisers, the decision said.

After winning re-election, Roberts chose to remove the employees. In turn, they contended that Roberts retaliated against them for their protected political speech. “There was testimony from disinterested witnesses that the sheriff told employees to stay off of his opponent’s Facebook page or they would be terminated,” says James Harrell Shoemaker Jr., attorney for the plaintiff employees. Among the complaints was Carter’s contention that merely pressing a Facebook like button was speech protected by the First Amendment.

But a federal judge in Virginia decided he didn’t like the like button, and in April he said that clicking it was not protected speech. “Merely ‘liking’ a Facebook page is insufficient speech to merit constitutional protection,” wrote Judge Raymond A. Jackson of the Eastern District of Virginia in Norfolk.

In his decision in Bland v. Robertsy, Jackson contrasted Carter’s clicking a button with other cases in which individuals were disciplined for lengthy Facebook posts that consisted of actual statements but were clearly considered speech.

Although the case involved other issues—including whether the sheriff was entitled to qualified immunity—it was Jackson’s like button ruling that surprised the legal community. “I’m speechless,” says Marquette University law professor Paul Secunda, who has written extensively on public employees’ free speech rights. “The analysis is just dead wrong. Pressing like on Facebook is the cyberequivalent of making a gesture at someone. We know that giving someone the finger or clapping for someone are considered forms of protected expression.”

Many public employees have been disciplined over online comments about superiors, co-workers, working conditions, customers or disputed political issues. In those cases, the court gauges whether the employer’s right to an efficient, disruption-free workplace trumps the employee’s free speech rights.

“Most of the cases involving public employees and social media have involved cases where those employees have blogged about something and it has found its way into the workplace,” Secunda says. “Often the question is whether the online comments cause a disruption or disharmony in the workplace or impair the ability of the employer to conduct its business.”

“Were Dwight Eisenhower running for president in 2012,” says free speech expert Clay Calvert, director of the Marion B. Brechner First Amendment Project at the University of Florida, “it’s hard to imagine the slogan ‘I like Ike’ would not take on a strong dose of Facebook meaning with supporters liking him online.”

Calvert is also puzzled by the ruling. “A like on Facebook reasonably and plausibly can be interpreted as a truncated form of political endorsement, especially given the fact that the individual who was liked was running for election. We live in a world of abbreviated forms of communication, from text-speak on smartphones to thumbs-up and thumbs-down movie reviews to stars for restaurant reviews.

Adds Calvert: “It’s important to emphasize that punching a ballot card with a stylus is a very simple act, too, but it amounts to the height of political speech. The depth of speech—how long or detailed it is—is not a criterion for determining whether it merits protection.”

Secunda says that “when the judge writes that liking a Facebook page is not a form of protected speech, he does not appropriately cite to the vast number of First Amendment cases that find constitutional protection for analogous forms of expressive gestures.”

However, Roberts’ attorney contends that the judge’s legal analysis was sound. “The facts of the case reveal that the two deputies who clicked the like button on Facebook did not realize that their pictures would be posted on the opposition candidate’s Facebook campaign site,” says Jeff W. Rosen of Virginia Beach.

“Both testified at deposition that they kept their support of the opposition candidate secret. They were not clicking on Facebook to express their political views. If the two deputies had posted specific comments, then I think they would have had a better claim that they had exercised their rights to free speech. Also, the deputies were longtime friends of the opposition candidate and clicking on the like button does not suggest anything other than they liked his website. The court concluded that such speech did not rise to a constitutional level that required protection.”

TO HIRE AND FIRE

The case may not be over, as Shoemaker says he already has filed a notice of appeal to the 4th U.S. Circuit Court of Appeals at Richmond. “Pressing like on Facebook is akin to a bumper sticker or a campaign button,” he says.

But the case promises more than just an agreement on the like button. “I am surprised that the media have focused on the Facebook issue because the primary issue in the case is the power of sheriffs in Virginia to hire and fire, and whether they can require political loyalty from their deputies,” Rosen says.

“Judge Jackson ruled that, since the law is unclear, Sheriff Roberts had qualified immunity, which protects him from such suits,” he adds.

Secunda agrees that the qualified-immunity defense could apply: “Even if liking on Facebook were considered protected First Amendment speech, … the sheriff would still be able to argue that he does not have to pay any damages in his individual capacity because of qualified immunity.”

He adds that “because taking an adverse employment action against someone for liking a Facebook page is not conduct that violates clearly established constitutional rights of which a reasonable person would have known, the sheriff in Bland would most likely not have faced an individual damage award in the Bland case.”

Rosen emphasizes that the sheriff can require a certain degree of loyalty from his deputies. “The bottom line is that sheriffs in Virginia can demand political loyalty from their deputies since they serve a law enforcement function and they represent the sheriff,” Rosen says, “just as the president of the United States can require that his advisers and Cabinet members be politically loyal to him as a condition of their employment.”

The other bottom line is that employees live in a world where they must use caution before engaging in social media expression. “Everyone—government employee or otherwise—should be cautious about what they post on social media sites that are publicly viewable,” Calvert says.

“Just as it is well-known that prospective employers screen job applicants in part by looking for information about them online, so too should we be wary that our current employees are checking up online to make sure we don’t say anything that negatively affects them. The chilling effect on speech of losing a job can be very real.”