Quarterly earnings calls can be stressful—especially if a business has bad or underwhelming news to disclose. Between upset shareholders and skeptical reporters firing off questions and scrutinizing numbers, CEOs would be forgiven if they conducted this four-times-per-year ritual with a full bottle of scotch next to their speakerphone.

Burford Capital, however, has had no need for such feelings of dread.

Its earnings calls, as of late, seem to contain nothing but good news. Founded in 2009 by Christopher Bogart, a former litigation associate at Cravath, Swaine & Moore and former general counsel at Time Warner Inc.; and Jonathan Molot, a former lawyer at Cleary Gottlieb Steen & Hamilton and a senior adviser in the Department of Treasury at the start of the Obama administration, the litigation financing company has become the largest such firm in the world. 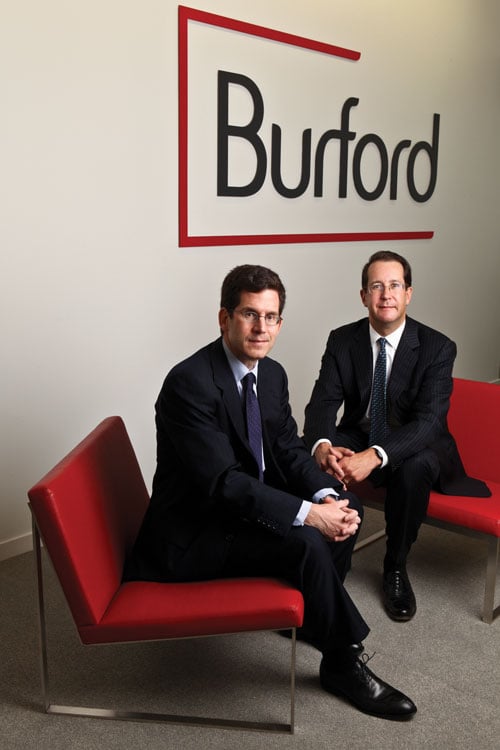 Burford, which has been traded on the London Stock Exchange since its inception, currently has $3.3 billion in its coffers to invest in legal matters. In the first half of 2018, the company reported that income was at $205.2 million, a 17 percent increase compared to the first half of 2017. Meanwhile, the company has expanded, buying up Gerchen Keller, a Chicago-based litigation finance firm, for $160 million in 2016.

Gerchen Keller founders Adam Gerchen, Ashley Keller and Travis Lenker, who have since founded a plaintiffs-side litigation firm, declined to be interviewed.

In an October Burford study, the company surveyed 495 lawyers, general counsel and partners in the United States, the U.K. and Australia and found that more than three-quarters of them believe that litigation finance is a growing and important part of the business of law. The study also found that 70 percent of those who had not used it before are likely to in the next two years, while 42 percent of law firms surveyed see litigation finance as a way of remaining competitive in the marketplace.

“We have a suite of ways that we help law firms and the corporate clients of law firms,” says David Perla, managing director at Burford who joined in May after eight years of being in charge of legal outsourcing providers Pangea3 and two years as president of Bloomberg BNA’s Legal Division/Bloomberg Law. “For firms, it’s a business development tool. They’ll ask us to educate their clients about the benefits of applying for capital to monetize their existing legal assets.”

At its essence, litigation financing is third-party funding of legal cases. Legal financing companies provide a nonrecourse cash advance to litigants—usually plaintiffs—in exchange for a percentage of the judgment or settlement. It is not considered a loan but rather a form of asset purchase or venture capital. If, for example, the financier invests $200,000 and the case settles for 10 times that, the finance firm gets back its initial $200,000, as well as a percentage—anywhere between 10 and 30 percent—of the settlement money. If a plaintiff loses, the financing firm does not get paid.

Proponents of litigation funding say it levels the litigation playing field, benefits companies and firms by allowing them to free up capital for core business purposes, and reduces the risks for firms and their clients to settle for less than what their cases are worth.

Critics, on the other hand, contend that litigation funding disrupts the legal process by bringing in an outside party that can potentially exert control, encourages the filing of frivolous suits, and gives plaintiffs attorneys an unfair advantage in settlement talks.

“There’s been an increasing demand for litigation funding by both firms and clients in the last couple of years,” says Eric Robinson, a shareholder at Stevens & Lee in its New York City office and co-chair of the firm’s litigation finance and alternative funding group. “Some firms don’t want to risk the contingency fee model, but that may change if a client is willing to consider a litigation funder.”

Financing is conducted on a single-case basis or on a portfolio of suits. Portfolio financing provides law firms with a large chunk of money in exchange for returns tied to a pool of cases.

Litigation financing is used for a variety of purposes. For individual plaintiffs, particularly those involved in personal injury lawsuits, the money can come in the form of cash advances to pay for such things as medical expenses or attorney fees. Advances tend to run between $2,500 and $7,500.

Meanwhile, for law firms and companies, it can be used for litigation or arbitration costs such as attorney fees, expert witness and court fees, or as working capital to cover such costs as salaries, rents and other business expenses. For individuals and companies, the money also can be used to provide cash flow during the period after a judgment has been issued and before the settlement or verdict money has come in.

That cash flow can be a lifeline—especially for law firms, allowing them greater flexibility with their caseloads. “A good piece of strong litigation is an asset; it can pay for itself or other costs,” says Allison Chock, the Los Angeles-based chief investment officer at Bentham IMF, which provides litigation finance to plaintiffs and law firms in the United States and for international arbitration.

Chock says litigation finance can allow clients to hire counsels who don’t normally take cases on a contingency basis. And it also enables firms to take on more contingency or hybrid fee cases than they ordinarily would because the firm is not carrying 100 percent of the risk throughout the case. “At a high-end contingency firm, you can only do a certain number at a time; otherwise the expense could bankrupt your firm,” she says.

Founded in 2001 in Australia, Bentham is the second-largest litigation funding company in the world, with $200 million dedicated to funding U.S. matters and another $106 million for legal funding in other jurisdictions around the world. The company entered the U.S. market in 2011 and currently has U.S. offices in New York, Los Angeles, San Francisco and Houston.

“Our company is made up of almost exclusively lawyers, including even some of our marketing personnel. Our CMO is a former litigator, as is our marketing manager in LA,” says Chock, a former litigation associate at Latham & Watkins and partner at litigation-only boutique firm Hennigan, Bennett & Dorman, which later merged with McKool Smith. “When a case comes in, we will do our due diligence—collection risks, how solid is the case, etc., and then based on our evaluation, we will decide what terms will be offered.”