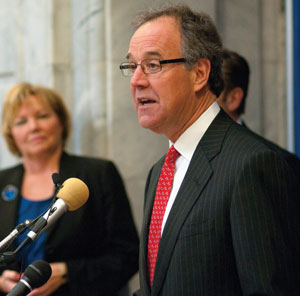 The occasion was seen as cause for celebration by businesses—so much so that Kentucky Chamber of Commerce President David Adkisson traveled to Bowling Green to cheer the move in person.

The Chamber of Commerce and other proponents argue that right-to-work laws will lure new companies to the state by making it more competitive with the 25 states that have passed such laws, including neighboring Indiana and Virginia. “We want to show that we’re open for business,” says Bryan Sunderland, senior vice president of public affairs at the Kentucky Chamber of Commerce. Right-to-work advocates also stress that those jurisdictions offer businesses a friendlier environment—or certainly one where unions have less political power. They also argue that the laws give employees more choice about whether to spend their money on union dues.

By contrast, unions and their supporters argue that the laws weaken labor organizations by cutting off revenue. Organized labor supporters also claim right-to-work laws allow employees to “free-ride” by gaining the benefits of union membership without the costs. That’s because unions represent all employees who are eligible to be in the bargaining unit, regardless of whether they pay dues.

“It’s another weapon that the anti-worker, reactionary forces in this country are using to beat down workers and dry up the funds that unions can use to be a voice for working people,” says Louisville, Kentucky, labor lawyer Irwin “Buddy” Cutler.

Now the right-to-work forces are aiming their efforts at states’ smaller jurisdictions, such as counties and townships. They claim that the Taft-Hartley Act—the 1947 statute that limited the New Deal-era National Labor Relations Act, which guaranteed employees the right to unionize and bargain—allows such districts to pass their own right-to-work laws.

Supporters of right-to-work laws argue that the word states encompasses political subdivisions, including counties, towns and small jurisdictions. That theory was set out in an August 2014 paper, Local Governments Can Increase Job Growth and Choices by Passing Right-to-Work Laws, published by the Heritage Foundation, a conservative policy group.

By April, the movement that started in Warren County had spread to 11 other Kentucky counties, which passed their own right-to-work measures. The Bluegrass State is seen as a particularly hospitable venue for local right-to-work laws thanks to its “home rule” law, passed in 1972, which enables counties to pass laws favoring “promotion of economic development.”

A coalition of nine labor unions, including the AFL-CIO, is suing in U.S. District Court in Louisville to block the measure in Hardin County. The unions argue that the NLRA pre-empts labor laws passed by cities, towns or counties.

Cutler, who represents the unions, points out that Kentucky has 120 counties and more than 500 political subdivisions.

“It could be a mess,” Cutler says. “You could have a hodgepodge of laws governing right-to-work, governing whether employees have to pay their share for union representation from one county to another.”

Hardin County argues that the NLRA, combined with the state home rule law, entitles them to pass right-to-work laws.

County officials also say there are good reasons for different counties to have different regulations. “Kentucky counties vary widely in both their geography and their primary contributors to the local economy. Rural counties with economies fueled by agricultural and small business [interests] may care little about ‘right-to-work,’ ” Hardin officials argue. Hardin County residents also compete for jobs with residents of states that have right-to-work laws, officials argue.

John Lovett, a lawyer who is representing Hardin County, adds that the U.S. Supreme Court has ruled in other contexts that federal statutes permitting regulation by states also permit regulation by political subdivisions.

The unions counter that Congress never intended to “invite a chaotic welter of piecemeal local regulation” when it decided to allow states to pass right-to-work laws.

That position is backed up by the National Labor Relations Board and Kentucky Attorney General Jack Conway; both filed amicus briefs arguing that federal law pre-empts local counties from passing their own labor laws.

Each side has asked U.S. District Judge David J. Hale for summary judgment. He heard oral arguments in August. Hale’s decision likely will be appealed to the 6th U.S. Circuit Court of Appeals at Cincinnati and possibly the Supreme Court. Observers say that a Supreme Court ruling in the case could set a nationwide precedent that will either pave the way for local laws everywhere or put an end to the nascent effort to pass right-to-work laws at the local level.

Kentucky isn’t the only state where right-to-work advocates are attempting to pass local laws. Earlier this year, Illinois Gov. Bruce Rauner unsuccessfully pushed state lawmakers to create local “empowerment zones,” which could pass their own measures.

State Attorney General Lisa Madigan weighed in against Rauner’s proposal. “It is my opinion that the National Labor Relations Act pre-empts counties and municipalities … from adopting local ordinances that regulate the use of union security agreements in all instances that impact interstate commerce,” she wrote in March, two months before Illinois lawmakers rejected the plan.

In Kentucky, officials in Shelbyville attempted decades ago to pass a local right-to-work law, but the state’s highest court struck it down in 1965. The judges ruled in Kentucky State AFL-CIO v. Puckett that federal law pre-empted the local ordinance.

In a December letter to Warren County Judge-Executive Michael Buchanon, the former justices said that the county “has full authority to enact a right-to-work ordinance.”

“The conclusion is inescapable,” Lambert and Graves wrote.

Proponents also point to a 2002 decision by the 10th Circuit at Denver, which rejected a pre-emption challenge to a right-to-work law adopted by the Pueblo tribe of San Juan, New Mexico. The appellate court ruled that as an Indian tribe, the Pueblo retain “the sovereign power to enact its right-to-work ordinance.”

But union advocates say that the 10th Circuit ruling wouldn’t apply to cities or counties because the appellate judges based their opinion on the unusual legal status of Indian tribes.

“If the ordinance is allowed to stand, other local governmental entities in New Mexico and presumably elsewhere could enact such ordinances, or different ordinances, concerning the same subject matter,” U.S. District Judge Edwin Mechem said in his ruling. “The result would be a crazy-quilt of regulations within the various states.”

This article originally appeared in the October 2015 issue of the ABA Journal with this headline: “Local Unions: Right-to-work campaigns aim at smaller jurisdictions.”