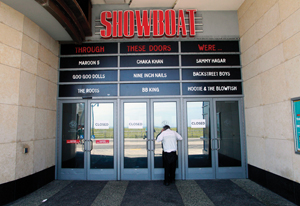 Given New Jersey's successful efforts in the 1970s to become the second state to offer casino gambling, a lot of high rollers would have bet that the state would beat the odds in being able to legalize sports gambling.

In 2011, voters approved state-sanctioned sports wagering at New Jersey's casinos and racetracks, and in 2012, Gov. Chris Christie signed the measure into law. The effort was an attempt to shore up the state's declining fortunes at its Atlantic City casinos, which have faced increasing competition from new casinos on Native American reservations and from Las Vegas' revival as a resort city with family-friendly shows and world-renowned restaurants.

"We are in desperate need of innovative ideas to combat the continued downturn in New Jersey's gaming industry in both Atlantic City and at our racetracks," state Assemblyman Al Caputo told the Star-Ledger newspaper in June.

Constitutional law experts were watching the case, focusing on the dispute over the status of the anti-commandeering and equal sovereignty doctrines, two doctrines central to federalism. Anti-commandeering doctrine, rooted in the 10th Amendment, means that the federal government cannot compel state officials to enforce federal law. Meanwhile, the equal sovereignty doctrine means that states should receive equal treatment by the federal government.

Supporters of the New Jersey law contended that the Professional and Amateur Sports Protection Act was unfair and unconstitutional, since it allowed state-sponsored gambling in four states while prohibiting it in others. In dissent, Appellate Judge Thomas I. Vanaskie said that PASPA "prohibits the exercise of states' sovereign powers." The state contended that PASPA violated equal sovereignty because it gave preferential treatment to Nevada on the issue of state-sponsored gambling.

"The legislative history asserts that Congress was concerned about the evils of gambling when it adopted PASPA," says Jonathan Wood, an attorney with the Sacramento, California-based Pacific Legal Foundation, which filed an amicus brief urging the Supreme Court to decide the issue. "But if it truly had those fears, it should have forbidden the practice everywhere. Instead, it forbids New Jerseyans and most everyone else from doing what those in Nevada are free to do."

"Whether [PASPA] violates the 10th Amendment was the central question," says constitutional law expert Erwin Chemerinsky, law school dean at the University of California at Irvine. "But I think it was the second question presented that was more likely to engage the [Supreme] Court: Can Congress discriminate among the states?"

Experts were waiting for the high court to explain part of its ruling in the 2013 decision Shelby County v. Holder, which invalidated part of the 1965 Voting Rights Act that called for federal preclearance of voting changes only in selected states. According to Chief Justice John G. Roberts Jr., who wrote the majority opinion, the equal sovereignty doctrine "remains highly pertinent in assessing subsequent disparate treatment of states."

In Shelby County, "the court said that Congress must treat all states the same," Chemerinsky says. "But [PASPA] treats Nevada differently. Is that constitutional? I thought that was the question most likely to get reviewed."

In his deposition, reported by the Bergen County Record, NCAA President Mark Emmert raised the fear that increased gambling would harm the sport among college athletes and fans:

Shipp granted summary judgment to the professional leagues, finding that the New Jersey law was pre-empted by PASPA. He reasoned that Congress had the power under the commerce clause to enact the legislation. He also rejected the arguments that PASPA violated the 10th Amendment and its anti-commandeering principle. Shipp also rejected the idea that the federal law violated the equal sovereignty doctrine.

On appeal, the 3rd Circuit affirmed the district court. With respect to anti-commandeering, the appellate majority determined that PASPA did not require New Jersey to do anything, but "simply bars certain acts under any and all circumstances." With regard to equal sovereignty, the appeals court noted: "That New Jersey seeks Nevada's preferential treatment, and not a complete ban on the preferences, undermines appellants' invocation of the equal sovereignty doctrine."

"Since the Supreme Court only accepts 1 percent of the cases presented to it, you can never be too surprised when it declines review," Wood says. "But we thought the New Jersey case raised a really important issue and had a better chance than most to be granted. We're disappointed that the court didn't take up the opportunity to impose a meaningful limit on the commerce clause."

Wood adds: "That clause doesn't give Congress the power to balkanize the country by setting different rules by state. Quite to the contrary, the founding fathers intended Congress to use the commerce clause to break down barriers amongst the states and create a national common market."

"If Congress' unequal treatment was kosher here, it could likewise set different minimum wages by state, adopt different drugs laws for each state, or grant a monopoly over any other industry to a particular state. Each of those, like PASPA, would be improper and a significant threat to federalism," Wood says.

But New Jersey legislators are not yet done with sports gambling. After the Supreme Court denied cert, state Sen. Raymond Lesniak, D-Union, introduced a measure that would provide for privately owned sports wagering at casinos and racetracks. The effort would circumvent federal law, which prevents state-run gambling. It cleared the state Senate and the Assembly.

"The purpose is to get sports betting going at our casinos and racetracks as soon as possible without interference from the federal government or anyone else," Lesniak told the Star-Ledger.

This article originally appeared in the November 2014 issue of the ABA Journal with this headline: "Losing to the Spread: New Jersey suffers a setback in its bid for a sports gambling law."