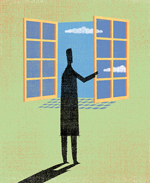 Release of a new version of windows is always big news, and the arrival of Windows 7 on the heels of the perceived failure of Windows Vista makes it especially noteworthy. It’s a good sign that comments from the large and lengthy beta test period and the early reviews have been quite positive for Windows 7. Reviewers say the new operating system is what Vista should have been, that it fixes the issues in Vista—even that it is the most “Mac-like” version, which sounds like faint praise.

In this article, we will take a look at ways to consider what, if anything, you might need to do in connection with the launch of Windows 7 and how you might make the move. I will offer a few observations about the operating system, but I encourage you to look elsewhere if you want a detailed review of Windows 7.

I have sometimes referred to Vista as the version of Windows that the legal profession skipped. Law firms largely standardized on the XP platform and did not move off of it when Vista arrived. Given Vista’s emphasis on security improvements, the reluctance to move might seem surprising. There are many reasons for low adoption rates of Vista. Apple’s very successful “I’m a Mac/I’m a PC” advertising campaign no doubt played a role, as did negative reviews and a couple of key issues:

However, for most people, Windows XP just worked. There was simply no compelling reason to move, and to this day it is difficult to point to specific features in Vista that would motivate the average user to move from XP.

On the other hand, Windows XP, released in 2001, is nearing its end of life. It’s quite old in operating system years, and it has its own set of issues. For example, instead of getting a cup of coffee the next time you start up XP, take a stopwatch and see how long it takes to fully boot up.

Lawyers will like the encryption features, although you’ll need to have the Ultimate or Enterprise version to get the full-disk encryption tool BitLocker. A feature called Libraries lets you gather related documents in a single folder even though they are in different directories. Lawyers will also appreciate the vastly improved internal search capabilities.

Your two most important factors in success with Windows 7 will be doing your homework and making sure you have adequate horsepower in your hardware. Ignore the “minimum” requirements and consider the “recommended” requirements as your minimum. Do not scrimp on internal memory, known as RAM.

If you plan to upgrade an existing computer to Windows 7, you absolutely must run Microsoft’s Windows 7 Upgrade Advisor tool. It will help you determine whether you have the right components to even consider an upgrade. As part of my prep work, I purchased Ed Bott’s new book, Windows 7 Inside Out. Yes, a thousand-page book probably will be overkill for most of us, but you can skim the highlights. I now have a good idea of the complexity and substantial amount of time required for an upgrade.

Which leads to my first conclusion: Going to Windows 7 makes the most sense when you buy a new computer, ideally with it pre-installed.

If you take nothing else from this article, please remember that there is no specified path to upgrade directly from Windows XP to Windows 7. You would be looking at wiping the old system from your machine and doing a fresh install of Windows 7, and—most important—reinstalling all of your programs.

If you are considering any upgrade of an existing computer from XP or Vista, you must understand whether you will have to reinstall your programs as part of the process. Bott’s book and various Internet resources will help with these issues and give you a sense of how much time and effort could be involved. And there are third-party tools that can help you migrate data, programs and settings in some cases.

You will also need to choose your version of Windows 7 thoughtfully. For most, the Home Premium or Professional versions will make the most sense, but the encryption features of Ultimate or Enterprise might be appropriate for many lawyers.

Should you wait for the first service pack? I expect that we’ll see a lot of that time-honored approach—wait until the first service pack is released before moving to a new version. The long beta period indicates the OS might be quite solid in the initial release. Indeed, early reports have shown fairly smooth sailing and no signs of any push for an accelerated release of a service pack.

Also, the release of Windows 7 has raised the question of whether we are seeing the last major desktop operating system release. As people use the Internet for more applications, as in “software as a service” or cloud computing, the browser becomes the most important software on a computer. And browsers run on any operating system. Meanwhile, smartphones have also become an important computing platform.

With Windows 7 there are many positives, but I suspect the compelling reasons for a move (and they are important) will be the end of life of an aging XP and transition away from or avoidance of Vista.

If you plan to stay in the world of Windows, Windows 7 will likely be in your future sooner than later. You will want to do your homework, make a realistic plan and create an environment where success is likely.

For me personally, that means getting Windows 7 pre-installed on a new computer as the best upgrade path of all.