Manly As They Wanna Be: Bikers Can Harley Wait for Court to Rule on Macho Rubber-Burning Ritual 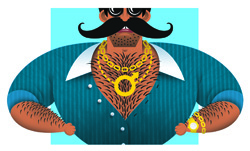 What exactly is it that makes a man feel the need to prove that he is, in fact, a man?

Is it the testosterone coursing through his system? A primordial sense of territoriality? Watching too many beer commercials?

Treatises have been written on the subject since treatises began being written, but for the sake of the argument let’s just agree that boys will be boys. And even the big boys feel a need to strut their stuff now and then. (Does anyone recall a certain U.S. president landing a plane on an aircraft carrier and emerging in a flight suit, in front of a sign declaring “Mission Accomplished”?)

Russian President Vladimir Putin is no stranger to photo ops either, especially if he can be shirtless or shooting a rifle.

In many cultures, a strong sense of masculine pride is not only tolerated; it’s celebrated. And it takes many forms, such as dominating a spouse or picking fights with other men. Mostly, though, it’s all about drawing attention—“Hey, look (please, please look) at how manly I am.”

But is drawing attention to oneself through displays of machismo an actual free speech right guaranteed by the Constitution? That’s the subject of a lawsuit filed in June in the U.S. District Court for the District of South Carolina. The plaintiff is a biker bar in Murrells Inlet, a few miles south of Myrtle Beach. Known as Suck Bang Blow (we’ll just call it SBB), it’s a place where patrons can ride their “hogs” right up to the bar to order a cold one. But it’s what riders do outside the bar that drew the attention of Horry County officials.

Since SBB opened in 1996, patrons have carried on a tradition of doing a “burn-out”—revving the engine and making the rear tire spin while applying the front brake. Because of the resultant smoke and noise, the county ordered the bar to cease the burnouts this year, declaring them a public nuisance.

So, no more burnouts?

Well, that’s about as fathomable to SBB as adding quiche to the menu. Hence the lawsuit, which states that its patrons enjoy doing burnouts while “expressing their manliness and macho, as all males are prone and inclined to do to a greater or lesser degree.”

The lawsuit further states that “providing these expressive performances to the public is a beneficial social activity which enhances individuals’ conscious ability to assimilate.” The county answers that it—the county—is “expressly authorized by state statute to abate public nuisances.” This, it says, is not an infringement on constitutional rights.

Supporters liken the bikers’ burnouts to 1960s protest activities, such as young men burning draft cards or women tossing their undergarments into trash bins. It’s nothing more than freedom of expression, they say. Opponents say noise and smoke are public nuisances, plain and simple.

SBB obtained a temporary restraining order against the county, so for now the burnouts will continue. The case is expected to be decided by May 2013, just in time for the next big spring rally. Gentlemen, rev those engines.