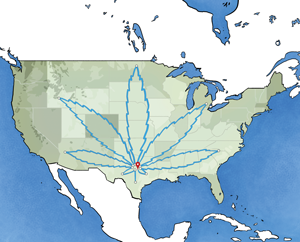 Once a staple of this country’s underground economy, marijuana is steadily becoming an accepted product in the legitimate market. With more than 30 states or U.S. territories permitting marijuana for various types of medicinal uses, and a few states even legalizing its recreational use, lawyers are increasingly being called on to advise clients on their marijuana cultivation businesses.

A key question is whether a lawyer advising a client on the cultivation, sale or use of marijuana under state law runs afoul of professional conduct rules given that such activities are illegal under federal law, which still classifies marijuana as a Schedule I controlled substance under the Controlled Substances Act. Under the CSA, it is illegal to manufacture, distribute or dispense a controlled substance. In other words, cultivating marijuana, even for medicinal purposes, violates federal law regardless of whether it is permitted by state law.

The Board of Professional Conduct in Ohio addressed this question in Opinion 2016-6, issued Aug. 5, a month before the state law permitting the cultivation, processing, sale and use of medical marijuana under a state licensing and regulatory framework went into effect on Sept. 8.

Opinion 2016-6 cites Rule 1.2(d) of the Ohio Rules of Professional Conduct, which prohibits an attorney from assisting a client in conduct the lawyer knows is illegal. That rule “does not distinguish between illegal client conduct that will, or will not, be enforced by the federal government,” the opinion notes.

Thus, a lawyer violates the Ohio Rules of Professional Conduct if he or she helps a client file an application for a marijuana license, represents a client before medical marijuana regulatory boards or drafts or negotiates contracts with vendors for medical marijuana businesses—all legal activities under state law—because they are illegal under federal law.

“Unless and until federal law is amended to authorize the use, production and distribution of medical marijuana, a lawyer only may advise a client as to the legality of conduct either permitted under state law or prohibited under federal law and explain the scope and application of state and federal law to the client’s proposed conduct,” states the opinion. “However, the lawyer cannot provide the types of legal services necessary for a client to establish and operate a medical marijuana enterprise or to transact with medical marijuana businesses.”

While this interpretation may strike some as draconian, there does not appear to be an active movement to start punishing lawyers working in the marijuana field. Indeed, the U.S. Department of Justice in 2013 issued a memorandum stating that its general policy is not to interfere with the medicinal use of marijuana pursuant to state law, provided that the state tightly regulates and controls the market.

“As far as I know, no attorney has ever been disciplined for providing typical services to someone who is obeying state law on medical marijuana,” says Robert Mikos, an expert on federalism and drug law who teaches a course on marijuana law and policy at Vanderbilt University Law School in Nashville, Tennessee.

Many experts say the Ohio Board of Professional Conduct reached an appropriate conclusion. “Opinion 2016-6 employs an exclusively textual approach to the issue, and its literal parsing of the Rules of Professional Conduct is correct,” says David F. Axelrod, a partner at Shumaker, Loop & Kendrick in Columbus, Ohio, whose practice includes advising clients on compliance with the state’s medical marijuana law. “Nonetheless, it makes no sense on a policy basis. For instance, one of the considerations that supports allowing attorneys to advise clients in this situation is that attorney discipline is state-based, and the state should interpret its own rules in a manner consistent with other state laws.”

A handful of other states have considered the same question of whether federal law trumps state laws on the issue of how lawyers may advise clients in the medicinal marijuana business, but their conclusions vary. In its opinion, the Ohio Board of Professional Conduct cited Colorado, Connecticut, Hawaii and Maine as being in accord with its conclusion. But some states, including New York, have gone the other way.

“There is a disagreement across the states about whether ethics boards should look to the content of federal law or should look to federal enforcement policy,” says Mikos. “New York has issued an interpretation of Rule 1.2 that concludes that it is permissible for lawyers to provide advice to marijuana business owners because of the nonenforcement of federal policy.”

In September, the Ohio Supreme Court responded with alacrity to the advisory opinion issued by its professional conduct board when it added a new subparagraph to Rule 1.2. The newly adopted Rule 1.2(d) states:

“A lawyer may counsel or assist a client regarding conduct expressly permitted under Substitute H.B. 523 of the 131st General Assembly [Ohio’s medical marijuana law] authorizing the use of marijuana for medical purposes and any state statutes, rules, orders or other pro-visions implementing the act. In these circumstances, the lawyer shall advise the client regarding federal law.”

Many experts applauded the Ohio Supreme Court’s expeditious response. “This is definitely the proper course of action when there is an ethics opinion, like the one in Ohio, that restricts a lawyer in advising a client concerning what is legal under state law and may be illegal under federal law,” says Peter A. Joy, a professor and director of the criminal justice clinic at Washington University School of Law in St. Louis. “A lawyer has to know that he or she can give advice without facing possible discipline, and it is proper to change the ethics rules to make that clear.”

Axelrod’s view is that there never should have been a conflict in the first place. “It would have made more sense for the Board of Professional Conduct to invite input from members of the bar and the supreme court before issuing the opinion,” he says. “Interestingly, it took the Ohio Supreme Court fewer than two weeks after issuance of 2016-6 to direct its staff to prepare a draft amendment to the rules to clarify the services attorneys can offer clients seeking to comply with the state’s new medical marijuana law.”

Other states that have changed their versions of Rule 1.2, or are considering such amendments, include Alaska, Colorado, Hawaii, Illinois, Nevada, Oregon and Washington. (The state versions of the rule generally follow the language of Rule 1.2 of the ABA Model Rules of Professional Conduct, but the Model Rules do not have a provision that addresses the marijuana issue.)

“Colorado presents an interesting case study,” says Axelrod. “After passage of Colorado’s medical marijuana law, the Colorado Bar Association Ethics Committee generated an opinion permitting Colorado lawyers to use medical marijuana, but declining to address whether it would violate the rules for lawyers to advise clients on marijuana-related matters. With the advent of recreational marijuana, however, the same committee generated an opinion similar to Ohio’s Opinion 2016-6. The Colorado Supreme Court responded by adopting Comment 14 to its Rule 1.2, permitting lawyers to advise clients concerning matters they reasonably believe to be permitted by Colorado law. The U.S. District Court in Colorado, which has adopted the state ethics rules, proceeded to opt out of the operative parts of Comment 14, leaving open the possibility that it may discipline federal practitioners for advising clients on marijuana-related matters.”

A key question, Axelrod says, is how the federal government will respond to the increasing legalization of marijuana for medicinal purposes at the state level.

“I am inclined to believe that with more ... states permitting the cultivation and use of marijuana in some form, the train has left the station, and it’s too late for the federal government to return to enforcing a blanket prohibition,” he says.

“Nonetheless, the policies under which the federal government has acted with restraint are revocable at the whim of our new president and/or his attorney general,” Axelrod adds.

This article originally appeared in the January 2017 issue of the ABA Journal with this headline: "Not So Fast: Lawyers advising clients on marijuana laws may run afoul of ethics rules even in states where the drug is legal."