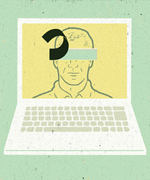 Masked by the Web’s anonymity, Internet users feel free to flame celebrities, blast politicians, or blow the whistle on employers for corporate misdeeds.

Burned by the postings, many plaintiffs resort to defamation suits. But in addition to the usual litigation issues, plaintiffs often find another one: plenty of defendants with the same name, John Doe.

“If we don’t know who they are, we don’t know where they are and we don’t necessarily know what court to file in,” says Gary Nissenbaum of Union, N.J., managing principal of Nissenbaum Law Group, which practices Internet law in New Jersey, New York and Pennsylvania. “Part of the reason this defamatory speech is so ubiquitous is because people assume they can never be found.”

But many Internet users forget one important thing: That cloak of anonymity has holes in it. The question now before the courts is exactly how big those holes should be.

Courts across the country are establishing balancing tests to decide when subpoenas should be enforced to unmask anonymous defendants for allegedly defamatory comments on the Web. The tests balance the defendant’s constitutional free speech rights against the plaintiff’s right to protect his reputation.

Many courts are moving away from a lesser standard requiring “good faith” by the plaintiff toward more restrictive standards that require plaintiffs to present evidence similar to that needed to survive a summary judgment motion.

“I think the law is becoming more settled,” says David Ardia, co-founder and director of the Citizen Media Law Project at Harvard Law School’s Berkman Center for Internet & Society. “The courts have taken a pretty high standard that anonymous speech is protected under the First Amendment.”

The District of Columbia Court of Appeals established its own balancing test in August in a case of first impression in Solers Inc. v. John Doe. Solers, a software-development defense contractor, was accused of copyright infringement by the Software & Information Industry Association, a D.C.-based trade group that seeks to prevent software piracy. The SIIA had received a tip through a confidential reporting form on its website alleging that Solers was using unlicensed software.

The SIIA threatened legal action against Solers based on the tip, but it didn’t pursue a claim after Solers completed an audit of its software. Solers then sued the unnamed informant for defamation and tortious interference with “prospective advantageous business opportunities” and subpoenaed the association to identify the tipster. The SIIA, which is not a defendant, didn’t identify the informant because it promises anonymity to tipsters to help protect whistle-blowers from retaliation.

A lower court dismissed the suit for failure to state a claim. But the suit was reinstated by the D.C. Court of Appeals, which established a five-point balancing test that must be met before a subpoena can be enforced to identify an anonymous defendant. The plaintiff must adequately plead the elements of the defamation claim and make reasonable efforts to notify the defendant, with the court providing reasonable time for the defendant to respond. The court also must require the plaintiff to “proffer evidence creating a genuine issue of material fact on each element of the claim that is within its control” and “determine that the information sought is important to enable the plaintiff to proceed with his lawsuit.”

The appeals court noted that its test closely resembles the “summary judgment standard” articulated in Doe v. Cahill. In 2005, the Delaware Supreme Court dismissed a suit filed by a local politician over comments about him on a blog sponsored by the Delaware State News. The court found that a plaintiff must present evidence sufficient to survive a summary judgment motion before an anonymous defendant could be identified through a subpoena.

The Delaware Supreme Court ruled that a lower standard could chill free speech and allow for discovery abuses by plaintiffs who wanted to unmask anonymous defendants for “extrajudicial self-help remedies; more bluntly, the plaintiff can simply seek revenge or retribution.”

That lower standard had been articulated in 2000 by a Virginia circuit court in In re subpoena duces tecum to America Online Inc. The court held that subpoenas to identify anonymous defendants on the Web are valid if evidence from the plaintiff shows there is “a legitimate, good-faith basis” to contend that it may be the victim of actionable conduct and the “subpoenaed identity information is centrally needed to advance that claim.”

The “good-faith test” has been criticized by many courts, including a California appellate court in Krinsky v. Doe 6 in 2008.

The court found that the test “offers no practical, reliable way to determine the plaintiff’s good faith and leaves the speaker with little protection.” And it concluded that a plaintiff must make “a prima facie showing of the elements of libel in order to overcome a defendant’s motion to quash a subpoena seeking his or her identity.”

The Appellate Division of the New Jersey Superior Court came to a similar conclusion in 2001 in Dendrite International Inc. v. Doe, but the decision went one step further. A plaintiff “must produce sufficient evidence supporting each element of its cause of action, on a prima facie basis.”

But the trial court then must “balance the defendant’s First Amendment right of anonymous free speech against the strength of the prima facie case presented and the necessity for the disclosure of the anonymous defendant’s identity to allow the plaintiff to properly proceed.”

Several courts have found the second balancing test to be needlessly complicated, redundant or too restrictive for plaintiffs.

In February of last year, the Maryland Court of Appeals adopted the Dendrite test in a case of first impression in Independent Newspapers Inc. v. Brodie.

Businessman Zebulon Brodie had sued anonymous posters to an Internet news site who called his Dunkin’ Donuts franchise “dirty and unsanitary-looking” and commented on the burning of a pre-Civil War home that Brodie sold in a real estate deal.

Emotions often cloud the facts when plaintiffs react to abusive comments with litigation without determining whether the comments are false or protected as opinion, says Paul Alan Levy, founder and director of Public Citizen’s Internet Free Speech Project in Washington, D.C. Levy represented Independent Newspapers in the Maryland case and argued for amicus groups in Cahill and Dendrite.

Usually, Levy says, the companies that sue over abusive comments are not big names like Ford or General Motors. “It’s someone who is personally invested in the business,” he says. “They don’t want to be personally attacked and so they want to send back a message: Don’t criticize me.”

Anonymity is a well-established facet of free speech. In the 1995 political-pamphlet case McIntyre v. Ohio Elections Commission, the U.S. Supreme Court found that an author’s decision to remain anonymous “is an aspect of the freedom of speech protected by the First Amendment,” and anonymity is “a shield from the tyranny of the majority.”

Justice Antonin Scalia was joined by then-Chief Justice William H. Rehnquist in a dissent that took a dimmer view of anonymity because it “facilitates wrong by eliminating accountability, which is ordinarily the very purpose of the anonymity.”

Developments in the law haven’t solved one central paradox of defamation claims. Plaintiffs seeking to protect their reputations inevitably spread the comments they are unhappy about to a much wider audience through the litigation.

In August, model Liskula Cohen won a ruling from a Manhattan judge that compelled Google to identify an anonymous blogger who called her a “skank” and a “ho.” The insults, which had been limited to an obscure blog, received widespread media attention because of the suit.

And the anonymous tipster who accused Solers of software piracy complained directly to the Software & Information Industry Association through its confidential, online tip line—not via a Web chat room or blog.

“This was not a public communication,” says Scott Bain, the SIIA’s in-house litigation counsel. “Nobody would have ever heard anything about this if it wasn’t for their lawsuit.”

Daniel Tobin, a partner with Ballard Spahr Andrews & Ingersoll in Bethesda, Md., represents Solers. He says the company “wanted to make clear that it wasn’t a [software] pirate” because the accusation carries extra weight since Solers is a software development company.

“We actually viewed it as a win,” Tobin says about the decision reinstating the suit. “The case is where we want it to be.”