Messin' with Texas: Major Firms Move in on the Ol' Boy Network 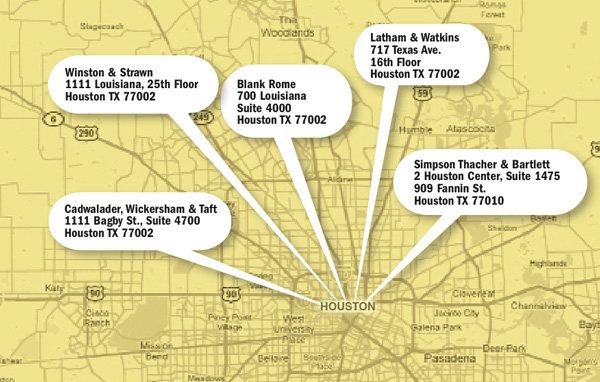 During the past 18 months, several national law firms have launched renewed efforts to establish themselves as power players in Dallas and Houston. And it is no secret that a handful of global megafirms have strategically targeted Texas firms for a possible merger.

“No question, Texas is being invaded by outside firms,” says Ward Bower, a principal at legal consulting firm Altman Weil in Newtown Square, Pa. “Big Texas law firms effectively shut [outside firms] out and made it a nearly impossible place for outside firms to survive.”

Baker Botts, Fulbright & Jaworski, Vinson & Elkins and other major Texas-based firms kept national law firms at bay through close client relationships with major energy clients and by developing an environment that shunned partners who jumped to other firms.

“Texas has always been dominated by the big energy law firms,” says Mike Short, a consultant at Hildebrandt Baker Robbins in Washington, D.C. “They made extreme loyalty a culture. There were very few laterals, which made it nearly impossible to open or grow a new office.”

There are notable exceptions: Jones Day gained a foothold during the savings and loan scandal and now has a 170-lawyer Dallas office. Weil, Gotshal & Manges used its thriving bankruptcy practice to grow to 112 lawyers in the city. And there’s Baker McKenzie—which, like Starbucks, is everywhere, including 90 lawyers in Dallas and Houston. But industry insiders note that none of these national firms have the high billable-hour rates or profits-per-partner demands of Gibson Dunn, Latham & Watkins or Simpson Thacher.

Texas firms cultivated tight partnerships with energy general counsel. In turn, those firms placed many of their lawyers on the in-house legal teams of those companies, who then sent more business back to their outside firms.

Short, Bower and others say the Texas legal market is quickly evolving and becoming more open and competitive. And the state’s growing economy, fueled by the ever-expanding energy industry, is increasingly more attractive. Key energy companies, including Shell Oil and Exxon Mobil Corp., have new general counsel. In addition, several major Texas law firms will experience changes in their senior leadership positions with in the next year, which adds to the instability.

“We’ve gone from zero lawyers in Houston at the start of 2010 to more than 50 by the end of this year,” says Michael Dillard, Latham & Watkins’ managing partner of Texas operations. “And our Houston office had the most billable hours on a per-lawyer basis within all of Latham & Watkins.”

The invasion of Texas is simply a sign that the region’s thriving legal market is maturing, say Bower and Short. They point out that simultaneously the BigTex firms have been growing outward, especially into California, New York, Asia and the Middle East. In doing so, they have done their share of poaching laterals.

A more specific factor, according to Dillard, is that hourly rates charged by the large Texas firms increased significantly during the past decade, making the national firms’ already-high rates more competitive.

Gibson Dunn managing partner Ken Doran says partners at Texas’ largest law firms are much more open to looking at lateral opportunities than they were only a few years ago.

“We presented seven highly respected Dallas partners an offer to grow their practices on a more global stage and they took it,” Doran says. “But be clear why we are there: Strategically, Texas is a very attractive market because of energy, technology and the large number of Fortune 100 companies based there. And it is only going to continue to grow.”