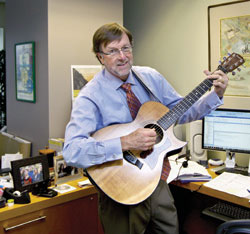 The call came on a Friday afternoon in 1991, the kind of news nobody wants to hear. But Timothy Tosta, then 41 and a partner in Baker & McKenzie’s San Francisco office, missed the call, and it wasn’t until the following Monday that he learned he had melanoma.

The doctor told Tosta that he had maybe two years; it was time to put his affairs in order. That was the part he didn’t tell his wife or their three children right away.

What came next wasn’t death, but surgeries, personal introspection and, ultimately, against-the-odds survival. And a quiet transformation: He began reading psychology, philosophy and comparative religion. He rediscovered music. Yoga and meditation followed, then volunteer hospice work, and gradually a new level of mindfulness—all while continuing to develop his career as a respected land-use attorney.

As it turned out, the new approach made him a calmer, more compassionate, more focused lawyer.

As Tosta was learning to still his mind, a similar shift was occurring across the profession as a growing number of lawyers discovered mindfulness practices and, more important, began talking to each other about it.

The late Steven Keeva, an editor at the ABA Journal, wrote about it in his book, Transforming Practices: Finding Joy and Satisfaction in the Legal Life. Law professors began teaching their students to meditate. New studies were released suggesting meditation may strengthen the brain. And as economic pressures mounted in the past few years—and concern about anxiety and depression among lawyers grew—so did interest in these practices that were said to sharpen decision-making skills and combat stress.

“The recession was really an important catalyst,” Tosta says.

In the past five years, contemplative law has for the first time emerged from the domain of the touchy-feely to an almost mainstream perspective.

“For many years, [mindfulness in the law] was there, it was alive and well, but it was little pockets here and there without any real conversation being had across these pockets,” says Scott Rogers, founder and director of the Mindfulness in Law Program at the University of Miami School of Law. “Then people began to come together.”

At least a dozen bar associations have programs focused on some aspect of mindfulness, and organizations have formed such as the DC Area Contemplative Law Group and the Mindfulness in Law Joint Task Force, combining groups from the Dade County Bar Association and the Federal Bar Association South Florida Chapter.

Experts estimate that anywhere from 12 to 20 law schools now offer mindfulness courses, both noncredit and for-credit, or are weaving it into the curriculum. Mindfulness is being integrated into classes on negotiation, professional responsibility and effective relationships. In 2011, two institutions that had been offering mindfulness classes launched broader efforts: the Miami Law program Rogers directs and the Berkeley Initiative for Mindfulness in Law at the University of California at Berkeley’s Boalt Hall.

“On orientation day for first-year students,” says Charles Halpern, director of the initiative, “where we were presenting the activities of the Berkeley initiative for the first time … a young woman came up to me and said she’d had to choose between Stanford and Berkeley—and she said she chose Berkeley because of this program.”

Becky Beaupre Gillespie is a Chicago-based journalist who writes on issues of work-life balance.