Mongolia or Bust: A New 'It' Country Draws Adventurous Lawyers to BigLaw 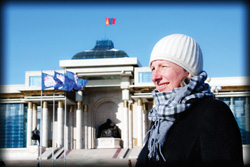 Elisabeth Ellis, shown by the Parliament House of Mongolia, opened an Ulan Bator office for her firm this year.

Sure, the electricity flickered off twice as Elisabeth Ellis waited for a phone call one recent morning. She’s heard hot water can be scarce at times, but she’s not yet experienced that hiccup. And she admits to a first-day thought at the supermarket of “God, what have we done?”

But Ellis found a fresh-food market the next day and is now reveling in the assignment she began in February—launching an office for her Australia-based firm Minter Ellison in Ulan Bator, the capital of the remote and harsh—yet resource-rich—country of Mongolia.

“I’d gone to Mongolia in December 2010 and was pretty stunned by all the development,” recalls the Australian, who’s a bit like the nomadic Mongols, having worked in Sidney, Bangkok and Hong Kong. “I got incredibly excited, but it took about a year for me to convince my 175 partners to open an office here.

“Obviously, those involved in natural resources were also excited. But those in Canberra doing real estate were saying, ‘You want to go to where? Why would you do that?’ ”

Ellis isn’t the only Western lawyer setting up shop in Ulan Bator, or UB as they call it. David Wenger, a Hong Kong-based partner, has opened an office for Australia’s Allens Arthur Robinson.

But Michael Aldrich, an American partner at Hogan Lovells, has bragging rights as the first lawyer to establish a Mongolian outpost on behalf of a major Western firm. “I’d been a regular visitor here since 1993,” recalls Aldrich. “In 2008, a local firm asked if Lovells could send a lawyer here and, in particular, if I could be sent. In May 2009, I came with the idea that I’d be here for two months—and here I am.”

Where, exactly, is Aldrich? Mongolia is a Central Asian country bordered by Russia to the north and China to the south. Its official tourism website boasts that it’s the world’s most sparsely populated “independent largest country” (2,754,314 inhabitants spread over roughly 603,902 square miles).

“The country sits on great reservoirs of natural resources—mounds of things like gold, copper, uranium and coal,” Aldrich explains. “By 2008 it was clear that with China’s appetite for these resources, it would be a natural for development.”

However, Mongolia is not yet a first-world country. “There are proper paved roads, but the median strip is dirt,” says Ellis. “And within 100 meters of the road, there will be no curb and the sidewalk is stones. There’s a lot of wind and dirt.”

Aldrich and Wenger rave about Mongolian summers, but the winters take some getting used to. “You can be told about minus 45-degree weather,” says Wenger, “but it’s hard to adjust to. You have to wear lots of layers, and you have to buy pretty specific clothing. You need a long, down-filled coat with a big fur hood to stop your face from freezing.

“You can adjust, but it takes some preparation and advice from the friendly locals.”

Don’t, however, assume the climate permits a less-formal business attire. “There’s quite formal dress, even in the depths of winter,” Ellis says. “I was told in the nicest way by my office manager that I had to up my look. Louis Vuitton is here, and people are wearing 3-inch heels.”

Aldrich says Mongolia is developmentally about where China was in the 1980s, but it differs in a critical way: “Mongolia is the unsung success story in Asian human rights. I was in Hong Kong in 1989 hearing the depressing news coming out of Beijing before the June 4 incident in Tiananmen Square. Nine months later, the same situation arose here in Mongolia. Instead of maintaining their political monopoly on power, the dictators let go and the country has evolved away from a Soviet-style dictatorship into a democracy.”

Given their history of dynastic and communist rule, Aldrich says, he’s continually surprised by the Mongolians’ progressiveness.

“There are no controls on the Internet, there’s no censorship of books, and ideas are freely expressed in the media, including about a dozen daily newspapers,” he says. “It’s ironic that, in some ways, coming here brought me back to work in a society whose political ideas are closer to our own when compared to other continental Asian countries like China, Russia, Myanmar and Indonesia.”

Though its homeland is massive, Ulan Bator’s business community is more mini. “I like that it’s so small that it’s very much like being part of a club,” says Ellis. “You very quickly get to know people.”

Mining is a huge industry in both Australia and Mongolia, so there’s a sizable group of Australians—about 300, Ellis estimates—in Ulan Bator. “There’s also a whole community of about 200 Mongolians who’ve studied in Australia,” she adds. “They call themselves the Mossies—the Mongolian Aussies.”

Taken by Mongolia and its people, Aldrich could see himself staying for years. Ellis also says it’ll be hard to walk away—but for both, new adventures will always beckon. “Now,” says Ellis, “it’s all about Myanmar.”