More Than Just Words: This Is What It Really Means to Talk Like a Lawyer 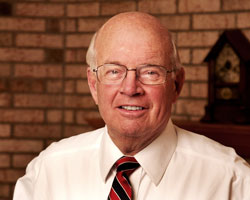 Jim McElhaney’s 25-year run as Litigation columnist for the ABA Journal will come to a close this fall. During those years, McElhaney’s straightforward advice on trial practice became one of the most popular features in the magazine. To commemorate McElhaney’s contributions, the Journal is reprinting some of his “greatest hits” from the past quarter-century. This article originally appeared in the Journal’s September 1991 issue under the headline “Professionally Speaking.”

It was humiliating. The young lawyer had put in more than a hundred hours on the brief. He had a novel interpretation of the appliance safety act that he was urging his firm to adopt in an important case. One of his memos had caught the attention of their client’s chief counsel, who suggested a strategy conference to discuss the young lawyer’s position.

The young lawyer knew he would have to talk about some of his ideas, but he wasn’t ready for what happened. “All right,” said the general counsel. “Let’s say that Mr. Baker and I are the court of appeals. We want to hear your argument. How are you going to convince us that for 60 years our reasoning has been wrong?”

The young lawyer was caught off guard. He floundered around for almost half an hour, hopping from one point to another, never really making a coherent statement. He was frankly relieved when the general counsel shifted his attention back to Mr. Baker and left him out of the discussion for a while. But by the end of the meeting, he could see that they had decided not to risk using his argument.

The ride back to the firm’s office was the worst part of it. Mr. Baker wanted to talk about the dynamics of what had happened.

“Maxwell caught you by surprise, didn’t he?” Baker said. “I should have told you that’s what he does. I still like your idea, but we may have to wait for a client who is more willing to take a chance.”

The young lawyer didn’t say anything.

“But you still got a lot out of that meeting, didn’t you?” said Baker.

“What do you mean?” said the young lawyer.

“You learned something a lot of lawyers never understand,” said Baker. “A lawyer is a professional speaker. You talk for a living. Every time you say something as a lawyer, you are making a professional presentation.

“It doesn’t matter whether you’re in trial, arguing to an appellate court, talking to a client or giving a CLE lecture. There are some basic rules for any kind of speech that you should follow if you’re going to be an effective advocate.”

That young lawyer was Angus. And now, 25 years later, he was making those same points to Beth Golden. I was there when Angus talked to Beth, and here are my notes.

BOND WITH YOUR AUDIENCE

Even the simple “May it please the court” is an instinctive recognition that pleasing your audience is the key to persuading it.

And there are all kinds of bonds that tie speakers to audiences—some simple and appealing, others base, even ignoble. The psychology of the bond lies in our most primitive past. Should the cavemen gathered around the communal fire even listen to this stranger from another clan? Any lawyer who has been subjected to “home cooking” has felt the power of “the cave.” It can be overcome, but it takes a lot of work.

Fortunately, there are other bonds that can tie a lawyer to the audience. One of the strongest bonds a lawyer can draw on is the very reason for everyone being in court in the first place: to right a wrong.

The same things are true in all kinds of other settings in which you must speak as a lawyer.

But whatever the surroundings, whoever the audience, whatever your goal and however long you have, you are the one responsible for effective communication. It is your job to make yourself understood—not your audience’s job to try to understand you.

Accepting responsibility for communication means a number of things—all of them important:

• Focus on your audience. Watch their faces for signs of understanding or confusion. Respond to the signals they send you. Even on very formal occasions, your job is to get ideas across, not to perform an idle litany.

• Don’t complain about the adversities you face, such as the surrounding noise, the lateness of the hour, the fact that you were deprived of some of your time to speak, or that you only had a short time to prepare. It’s up to you to overcome these obstacles, not to blame them.

• Respect your audience. Treat them as equals. Let them understand that getting your ideas across to them is the most important task you have.

CREATE A PERCEPTION OF CREDIBILITY

One of the reasons lawyers try so hard to sound like lawyers is that we suppose it gives us the trappings of credibility. If we know the magic words, we must know what we’re talking about.

But the problem is that the rest of the world didn’t learn our new vocabulary with us, so sounding like a lawyer is usually a self-defeating effort. You should choose other ways to look like you know what you’re talking about.

One of the best ways is to make sure that what you say is true. Talk only about what you know. Whenever you try to fake it, little verbal and nonverbal clues will give you away.

Show that you have prepared for your presentation. Sharing a few bits of interesting information or using a pertinent quotation not only grabs your audience’s attention but also says you have done your homework.

Of course, there are lots of ways to shoot yourself in the foot (or some more painful place). You can show that you don’t know the facts or don’t understand the law. Even showing dislike for the topic can be disastrous.

HAVE SOMETHING TO SAY

There was a psychology course that I always wanted to take when I was a college undergraduate, but somehow I never got around to it. Early every fall, students in the class would accost people walking through the student union and ask them to participate in an experiment. They would ask you to study the contents of a cigar box for 15 or 20 seconds. The box would have a number of ordinary objects scattered around the bottom and glued in place.

After the time was up and the box was closed, you would be asked to recite what you had seen in the box. It was fascinating how easy it was to forget objects you had just seen—even those you had consciously noted and decided you were going to remember.

But if you linked the objects together in a story, a theme or even a fanciful chain of absurd cause and effect, then your memory was vastly improved.

The point is simple: Never make a random cigar box presentation. Even organization is not enough. You need a point of view, a story with an object, a theme. You need to have something to say.

If a point is worth making, it is worth illustrating.

Good examples—apt analogies—are more precious than rubies. They have the power to persuade because they make the audience think your point through for themselves. So when they reach their conclusion, it is their idea—not yours.

But just as an apt analogy is a powerful argument, so is one that turns around on you. That means you must be careful about picking your analogies. Test them ahead of time.

The art of simplicity is not only knowing how everything fits together, but also knowing what can safely be discarded. And this is where lawyers have trouble.

Forget the exceptions unless they are directly relevant to what you are doing. Your function is not to cover everything; it is to make a focused presentation.

Usually your goal is not to impress your audience with what a fine speaker you are, but rather to persuade.

In classical times, it was said that when Athenian statesman Demosthenes spoke, people would say, “What a wonderful speaker.” But when Roman leader Cato the Elder spoke, the people would rise up and shout, “On to Carthage!”

When you are done, stop. Afterthoughts, recapitulations, repetitive exhortations and the dismal trailing off by the speaker who is not certain he has finished cost more than whatever they could possibly add to a presentation.

It’s much better to leave your audience thinking they want more than knowing they have heard too much.