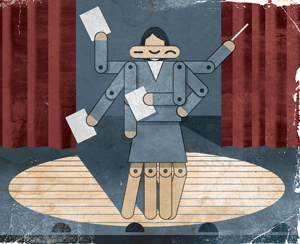 Studies indicate that more than 90 percent of human communication is nonverbal. That explains the idea that you can tell who won a presidential debate by muting your television and watching the body language of the candidates. Who smiled, straightened and glowed? Who fidgeted, slumped and scowled?

Likewise for lawyers who argue their cases at trial, demeanor is almost as crucial as eloquence is. But law schools don’t have classes in body language, and a surprising number of trial lawyers never learn this lesson. In 12 years as a federal prosecutor, I saw many lawyers’ bad habits—and worked to cure my own. Here’s a bit of what I learned.

ALL THE COURTHOUSE IS A STAGE

Above all, remember that if the jurors are in the courtroom, they’re watching your performance. That means you must stay in character, even if you don’t have a line. Your audience—the jurors—is watching you from the moment they walk in, long before you say anything. Their only entertainment is watching you. They can’t check their phones, talk to one another or even lift their rears from their assigned seats. They’ll notice everything you do and draw conclusions about who you are.

So consider your neutral face. Is it really neutral? Or does it look like you just argued with your spouse?

The phrase resting bitch face now is part of the Twitter lexicon, used to describe people—usually women—who look cranky when they’re not smiling. It’s often accompanied by a picture of poor, pouty Kristen Stewart. Yes, this term is sexist, and I hate it. As a female litigator, I’ve experienced the double standard that inspired it. But regardless of whether it’s fair or right, this double standard can tank your case.

The key to good courtroom demeanor for men and women is to appear trustworthy. If jurors think you’re unpleasant, they’re less likely to trust you.

This is why many successful trial lawyers—men and women—deliberately keep a small, calm smile on their face throughout trial. Does that sound awkward? Then practice in the mirror. You don’t want to look like a crazy person. But you might discover that a subtle, practiced smile looks friendlier and exudes more confidence than your natural expression does at rest.

There’s truth to that 1980s deodorant slogan “Never let them see you sweat.” Your star witness buckles under cross-examination? Smile your subtle, practiced smile. Unexpected testimony shocks you? Subtle smile. If you frown or rock backward in surprise, a juror might conclude that you think your case has been undermined. If you keep your neutral, subtle smile, it instead says: “Everything’s going my way, just as I expected, all part of my master plan.”

It’s amazing, actually, how much your body can say without a word passing your lips. A tall spine and good posture say you’re confident. Eye contact communicates that you’re truthful. Conversely, a hand over your mouth while you’re talking can suggest you’re lying.

Be nice to everyone in the courtroom. Kindness makes the world a better place, and it makes you a happier person. But if that’s not enough to convince you, consider this: Kindness makes you more likely to win your case. When jurors think you’re a good person, they’ll give you the benefit of the doubt and ascribe good motives to what you say. If they think you’re nasty or dishonest, they’ll discount everything that comes out of your mouth.

There are many reasons to be kind to your paralegal, but a bonus is that the jury will notice. Be nice to the stenographer (who also has the power to make things go your way, or not, in the transcript). And, especially, have a positive relationship with the courtroom clerk. The clerk checks in the jurors every morning, brings them pencils and leads them to the jury room. This person inevitably forms a stronger bond with them than anyone else in the courthouse. If the jurors see that you’re the clerk’s friend, you’re the jurors’ friend by association. If the clerk hates you, the jurors probably will, too.

Being nice applies to opposing counsel, even if you truly think he or she is the worst person in the world. In your fervor to represent your client, it’s easy to demonize your opponent in your head. But your personal villain might be the jurors’ favorite character. I saw a trial in which the defense attorney argued that the prosecutor, who was blind, was making objections solely so she could walk up to the bench with her seeing-eye dog and elicit the jurors’ sympathy. If you’re a jerk to anyone, the jurors likely will think you’re just a jerk in general.

Look out for the jurors in the box. If Juror No. 3 is having a coughing fit, suggest a break or ask the judge if the juror can have a cup of water. Bless sneezes. An attorney who represents the National Enquirer told me about a trial in which the tabloid was sued by Clint Eastwood. During the actor’s testimony, an elderly juror sneezed. Eastwood stopped in the middle of his sentence and turned to the juror, meeting her rheumy brown eyes with his piercing blue ones. “God bless you, ma’am,” he said. As she melted, the attorney for the magazine knew he’d lost the case.

You probably already have facial tissues, plastic cups and a pitcher of water ready for yourself. But if your cross-examination is so tough that a fragile witness breaks down in tears, pause to give them a tissue or a cup of water. It can soften your hard edge. As with many of life’s difficult moments, small gestures can go a long way.

TEND TO YOUR TONE

I could write a whole article about tone of voice. I struggled for years to find mine. I was torn at different points between seeming too young, too academic or too strident (another female pitfall). You want to come across as smart but not smarmy, warm but not cloying, passionate but calm. It’s a difficult balancing act for anyone, but it’s especially tough for young lawyers and female litigators.

Eventually, I found my sweet spot, talking to jurors as I would to my mother-in-law: a smart, empathetic woman I loved and admired and who brought out the best side of me. Think about someone in your life such as this. Stephen King writes his books toward an imagined “ideal reader.” Make your closing argument toward an “ideal juror” who you respect and like and who brings out the best in you. If you’re not sure you’re hitting the right tone, try to practice your opening on your own mother-in-law. The advice you get from a nonlawyer can be eye-opening.

Of course, we hope that trials aren’t battles of personalities. We hope that jurors will listen to the merits of the case, examining the facts, evidence and expert testimony without bias. But inevitably, jurors will filter your facts through the emotions that you sparked in them. Poet and author Maya Angelou observed that “people will forget what you said, ... but people will never forget how you made them feel.” If you consider how your body language makes the jurors feel, you will encourage them to feel the best that they can about your legal arguments.

Allison Leotta, a former federal prosecutor in Washington, D.C., is the author of five novels, including A Good Killing, which O, the Oprah Magazine named one of the year’s best summer books.

This article originally appeared in the December 2016 issue of the ABA Journal with this headline: "Motion Applied: Your body language during trial can be just as important as what you say."