This lawyer's blindness led him to a tech-focused law practice 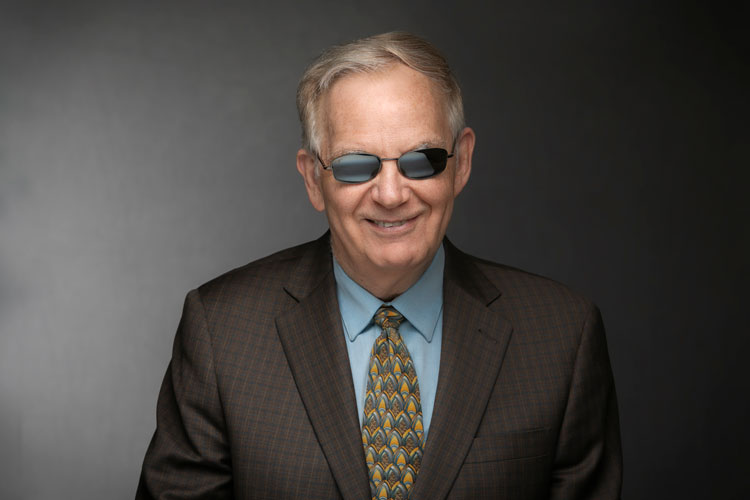 If I’m honest, I backed into the law more than anything else. In this I suspect I am not alone, though I think few would admit it.

My journey started on a farm in northeast Missouri. Very early, I knew that farming was not in my future, having developed an allergy to dirt, grease and sweat. My father wanted me to be a doctor. That, of course, ensured that I would become anything but a doctor.

At a small, rural high school, one gets to do everything: baseball, football, track, golf, band, basketball, 4-H, student council, honor society, Young Engineers and Scientists, and even Future Farmers of America. Probably because it was strange and unusual for a farm boy to have a passion for nuclear physics, that is exactly what I had. Although I do not remember now, in high school I could have told you the oscillation properties of a muon neutrino.

All of that, however, slammed to a sudden halt when an accidental blast from a fellow quail hunter’s gun knocked me flat. The spray from the shotgun’s muzzle sent lead pellets through my eyes, rendering me blind.

This all happened during the turmoil of the Vietnam conflict. While recuperating from the accident, I became caught up in the winds of change and the politics of the era. I started making campaign speeches on behalf of then-Missouri Attorney General Thomas Eagleton, a charismatic dovish Democrat, at ice cream socials, county fairs and public gatherings of all kinds. The adrenaline rush one gets from campaigning generally—and specifically from engaging in public debate—is hard to explain, and it is addictive. It seemed that politics was definitely in my future.

“What happened to nuclear physics?” you might ask. Braille, it turns out, is not well-suited to complex mathematics. The Braille symbol for the letter “a” is also used for the number “1”; the symbol for “b” matches the “2” symbol; and the same is true for the other integers. It takes additional symbols to differentiate between letters and numbers. Imagine even a relatively simple algebraic expression written in Braille. A career in physics, therefore, was doomed.

Politics became my passion. I was elected the president of the Young Democrats and chaired a statewide youth committee for the Democratic Party. I was active in the movement to lower the voting age to 18.

The default profession, it seemed, for all politicians was the same: the law. Therefore, I applied to an array of law schools and in that way backed into the law.

It is impossible now to re-create the electric atmosphere of 1973, the year I started at Harvard. The Senate Watergate Committee hearings were being televised daily. The vice president of the United States, Spiro Agnew, resigned, making nolo contendere a highly relevant topic of discussion in our criminal law class. After the Saturday Night Massacre, Elliot Richardson spoke on campus about why he resigned rather than fire special prosecutor Archibald Cox at the behest of the embattled President Richard Nixon. Then, of course, the president of the United States resigned, and his handpicked successor pardoned him.

Looking back, I was extremely fortunate but too oblivious to realize it. When interviewing for associate positions, I was usually asked, “How can you practice law being blind?” I think most who asked that question didn’t have a clue. At the time, however, I thought they were just asking for my strategy. One interviewer, however, did not ask. So, I asked him why he didn’t ask. He said, “If you can make the kind of grades that you have made at the Harvard Law School, then you can figure out how to practice law in our law firm.” I accepted the job offer from that firm, and that is how I ended up in Kansas City.

Just as I backed into the law through pursuit of politics, I backed into intellectual property and technology through my blindness. Using voice synthesis, I taught myself computer programming, and I even wrote a couple of commercially distributed educational computer programs. Then, the early, primitive screen-reading programs required a deep knowledge of computer technology. That immersion in technology positioned me well for the technology explosion that came with the microprocessor and all that followed. My practice now is involved heavily in technology and related intellectual property rights.

It was not until well after my own practice began to flourish that I realized how astoundingly lucky I was. The unemployment rate for blind people generally is about 70 percent. Many blind and physically handicapped people who are pumped through law school struggle to find any kind of law-related job. What a terrible tragedy—not just for the lawyers with disabilities but also for the organizations that miss out on the creativity, inventiveness, and out-of-the box thinking that almost inevitably comes with people with disabilities.

When an individual has to devise alternative solutions to accomplish even the most mundane tasks, that person is, of necessity, adept at finding alternative solutions—solutions that often escape others. That is the message the disabled community needs to broadcast, and seeing that it happens is the main reason I am so involved in issues of diversity and inclusiveness, even though they do not directly relate to my legal practice.

Ed Marquette is a partner at Kutak Rock. A diversity and inclusion advocate, Marquette serves as the chair of the Diversity Action Group for the Intellectual Property Law Section of the ABA and as the section’s liaison to the Commission on Disability Rights.

ABA Journal magazine with the title, "Backing into the Law."