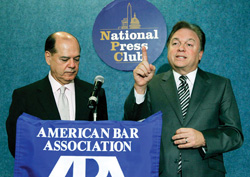 When it comes to immigration issues, Bill Richardson likes the spot the ABA is in.

“The ABA is a mainstream, powerful institution, and our community wants to be mainstream—they want to be part of the American dream,” said Richardson, a Latino political leader who ends a two-term run as governor of New Mexico this month. “It’s important that we explain immigration issues in terms of what’s good for America and what is good for mainstream issues.”

Richardson offered that view Nov. 12 at the first public hearing of the newly formed ABA Commission on Hispanic Legal Rights and Responsibilities. He serves as an honorary co-chair of the commission.

“The fact that the ABA is embracing Latino rights and immigration reform, and not just letting it be a Latino issue—making it an American issue—I believe is going to help bring the coalitions together,” said Richardson in an interview with the ABA Journal. “They’re going to say if the American Bar Association is behind this, there must be something legally sound and very good about it.”

The commission was created by Stephen N. Zack, who in August became the first Hispanic-American to serve as ABA president. Zack is administrative partner in the Miami office of Boies, Schiller & Flexner. The commission chair is Cesar L. Alvarez, executive chairman of Greenberg Traurig in Miami. In addition to sharing the same local legal community, Zack and Alvarez both come from families that were forced to flee Cuba when the Castro regime came to power.

“The United States’ promise is that when you come to the United States, you have the ability to achieve what everyone else has,” Zack told the commission during its hearing at Loyola University School of Law in Chicago. The commission will hold upcoming hearings in California, New York and Texas. The commission’s goal, he said, is to produce a report that points the way for how Hispanics can be fully integrated into American society.

At the hearing, Zack cited statistics indicating that some 30,000 Hispanics living in the United States will reach adulthood each month over the next 20 years. Zack said their legal needs are not being met, a view that was echoed by others who testified to the commission.

“The growing need for Spanish-speaking lawyers can’t be ignored and must be addressed by our law schools,” said Adria D. Maddaleni, president of the Wisconsin Hispanic Lawyers Association. She noted that Marquette University Law School in Milwaukee now offers a course on comparative criminal law and procedure that is taught entirely in Spanish.

Janet Murguia, president of the National Council of La Raza in Washington, D.C., pointed out in her testimony that one out of every four children in the United States is Hispanic. “It’s obvious that the Latino population has significant unmet legal needs” in a number of areas, she said, including employment, health care, education, immigration and criminal justice.

“Among the key goals of the ABA is eliminating bias. I would submit to the ABA that it can’t achieve those goals without a legal system that is more reflective and responsive to the Latino community,” said Murguia. “The ABA needs to develop and recommend new public policy to address systemic legal barriers, as it has done in so many areas.”

Zack said at the Chicago hearing that some people questioned whether the commission could be effective because there are “too many different types” of Hispanics.

“I say that is a bunch of hooey,” he said. “Each person sitting on this commission is a hero in the Hispanic community. We have so much in common, and so much to talk about. You are going to begin that journey today.”