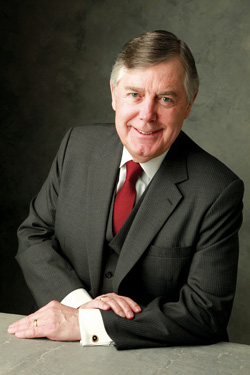 A year ago, incoming ABA president Stephen N. Zack identified the funding crisis facing the state courts as one of the key issues he wanted to tackle during his one-year term. He created the Task Force on Preservation of the Justice System and gave it a year to identify the scope of the financial troubles facing the courts and develop recommendations for how to deal with them.

But in the view of Zack’s successor, Wm. T. (Bill) Robinson III, that task force’s work may have only just begun.

In February, the task force heard sobering testimony during its first public hearing in Atlanta. In New Hampshire, civil jury trials were suspended during 2009 to save money, and other courts have imposed partial shutdowns. In Georgia, the supreme court started soliciting vendors for free pens and pencils. The National Center for State Courts found judicial systems in at least 29 states were facing possible budget cutbacks by legislatures.

In May, the task force heard more of the same at another public hearing in Concord, N.H. And in June, Zack, who is administrative partner in the Miami office of Boies, Schiller & Flexner, sent a letter to California Gov. Edmund G. Brown Jr. stating that recent legislative attempts to cut $150 million from the state court budget—which Brown had vetoed—would be “disastrous.”

In August, the task force’s recommendations will be a key item on the agenda of the ABA House of Delegates when it convenes during the association’s 2012 annual meeting in Toronto. The recommendations, which were being finalized in early July, are expected to call on state legislatures to recognize a constitutional responsibility to provide adequate funding to the courts, while urging courts to identify and implement best practices for protecting the rights of citizens and using resources as efficiently as possible.

Robinson, who will begin his yearlong term as ABA president at the close of the annual meeting, says that, if anything, the underfunding crisis facing the state courts has gotten worse in the past year.

Robinson pledges to make the issue his top presidential priority, essentially picking up where Zack leaves off. He already has received pledges from the preservation task force’s high-profile co-chairs—David Boies and Theodore B. Olson—to re-up. Boies is the Armonk, N.Y.-based chair of Boies, Schiller & Flexner. Olson, a partner at Gibson, Dunn & Crutcher in Washington, D.C., is a former U.S. solicitor general.

“The task force has been throwing an appropriate spotlight on this issue,” says Robinson, who is the member in charge of the Florence, Ky., office of Frost Brown Todd and also has an office with the firm in Cincinnati just across the Ohio River. “This is an issue we must raise.” Underfunded courts “are jeopardizing constitutional freedoms in our country,” he says, “and people must know it’s time to turn that around.”

Robinson cites recent evidence of the worsening fiscal challenges facing state courts around the United States. In New York, for instance, the state legislature imposed some $178 million in budget cuts that resulted in layoffs of nearly 500 court employees. Sixteen states around the country have furloughed staff without pay, and nine have furloughed judges. Fifteen states have reduced their hours of operation—including Alabama, where the courts are closed every Friday—and 26 states have delayed filling judgeships.

“So when I speak of a crisis,” he says, “it’s a crisis in its dimensions and in its consequences. When a courthouse is closed, justice is denied.”

Robinson, who applied a no-nonsense approach when serving as ABA treasurer from 2005 to ’08, recognizes that efforts to save courts from budget cuts at a time when most state governments are experiencing fiscal woes can be a tough sell. “The reality is,” he says, “there hasn’t been money for anything, and we respect that.”

But at the same time, he says, “courts haven’t had paid lobbyists or advocates in legislatures, and there is a declining appreciation for the courts as a co-equal branch of government. But the courts can’t just be viewed as another line item in a budget.”

In September, a two-day symposium will be held at the University of Kentucky College of Law in Lexington that will focus on the court-funding issue. The symposium is being organized to honor Robinson, a 1971 graduate of the law school, and he quickly suggested that topic.

Events being held around the country to mark Law Day 2012, which falls on May 1, also will focus on the fiscal crisis facing the courts. The theme will be “No courts. No justice. No freedom.”

‘ALWAYS TIME TO DO GOOD’

In addition to focusing on the court-funding crisis, Robinson says he will continue the work started by Zack in three other areas: making civics education a national priority, addressing legal barriers to full participation in the justice system by the Hispanic community, and improving disaster preparedness by law firms and courts.

“Steve’s initiatives are timely and substantive, and I’m committed to moving forward on them,” says Robinson.

But he also is being consistent with a pledge he made when he announced his candidacy for the ABA presidency, which came at the height of the recession. Simply put, his view was that the association’s own finances did not need the extra burden of additional presidential initiatives when existing issues are crying for attention.

“I pledged no new presidential initiatives during my term, and I plan to keep that commitment,” says Robinson, whose term will run through the end of the 2012 annual meeting next August.

Nevertheless, Robinson won’t be lacking in issues to address. Among them, he says, will be diversity, the increasingly visible role the ABA is playing on Capitol Hill as an advocate for justice issues being addressed by Congress, and the importance for lawyers to give something back to their communities through volunteer service.

On that issue, Robinson sets an impressive example. His resumé contains a long list of civic and volunteer activities. “It has enhanced my life, my family and my practice of law,” says Robinson, who declines to highlight any particular activity. “Martin Luther King said there is always time to do good, and I’ve tried to live by that.”