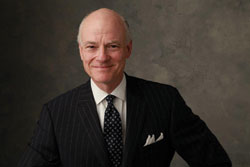 When it comes to legal services delivery in the United States, incoming ABA President William C. Hubbard wants to build a better mousetrap. And Hubbard, who begins his term in mid-August at the close of the 2014 ABA Annual Meeting in Boston, is wasting no time in launching a concentrated effort to accomplish that goal.

The urgency doesn’t stem so much from the fact that ABA presidents serve one-year terms—Hubbard’s will end in August at the close of the 2015 annual meeting in Chicago. Rather, Hubbard is committed to finding ways to close the widening gap in legal services delivery to poor and middle-income individuals and families before it bursts wide open.

Addressing the issue “starts with the understanding that, despite all the good efforts of so many lawyers, through their pro bono efforts and support for the Legal Services Corp. and its local affiliates, we still have a huge gap in our justice system, a justice system that is still not accessible to a majority of the poor of this country and an ever-growing number of moderate-income people,” said Hubbard during an interview with the ABA Journal in late July. He is a partner at Nelson Mullins Riley & Scarborough in Columbia, South Carolina.

“Our challenge,” said Hubbard, “is to convey this sense of urgency to lawyers in America. We need to bridge this justice gap while continuing to deliver services in an effective and efficient way to our existing clients. We all are creatures of habit and like to do things a certain way, but we need to change as a profession—and we need to change more quickly.”

Work on Hubbard’s initiative already was underway even before he took office. In June, the ABA Board of Governors approved his request to create a Commission on the Future of Legal Services, and the first of a series of six grassroots meetings on the issue recently was held in St. Louis. A national conference on legal services delivery is being planned for late spring of 2015, and Hubbard is looking for the commission to issue a report by next year’s annual meeting.

The commission’s primary task will be to identify the most innovative practices being used around the country to deliver legal services, as well as more theoretical ideas, and to develop a blueprint for fostering innovations in the legal system that will improve access to justice. The commission will be composed of up to 30 members representing a variety of perspectives, both from within and outside the legal profession.

Hubbard said he wants to “bring in people thinking outside the box, from across the country at the grassroots level, people who are unconstrained by preconceptions of how the law ought to be practiced.” And, he said, the ABA is uniquely positioned “through its convening power to bring representatives of these interests together to see if there is a way to harness innovative technology and create more approaches to the delivery of legal services in a way that is consistent with the core values of our profession and in a way that protects the public.”

“If we don’t change, the profession as we know it will go away,” he said. “We have to deliver legal services with more accessibility and less complexity using the tools available to us or we put ourselves at risk of becoming obsolete.”

The explosion in communications technology is the cause of many changes in the legal system—not all of them positive—but it also may hold the key to finding ways to close the gap in legal services delivery, said Hubbard. “Law is among those professions that historically had a monopoly on information,” he said. “Now lawyers don’t have control over information about our legal system. The Internet has opened up access to information through a few clicks on a keyboard. But if that information is more accessible, the question becomes: How can lawyers adapt to and take advantage of the fact that people have access to more information? How can we marry that ability to communicate with clients and potential clients in a more efficient way that allows us to serve our clients better, and which will allow the lawyer to work on the more crucial parts of a case, the parts of a case that require judgment?”

In December, the LSC reported the results of a study showing that 86 percent of people under the poverty line in the United States have cellphones, and 43 percent have smartphones. “Maybe we can take advantage of that,” Hubbard said, by developing ways to use technology to make it easier to deliver legal services to those people.

“We’ve fundamentally changed the way we shop and the way we bank, how we communicate,” he said. “It forces you to think: Are we really utilizing the technologies that are available and being innovative in our approach to the delivery of legal services? If we can harness this innovation and use these technologies, can we actually and in a significant way close this justice gap?”

Hubbard’s Commission on the Future of Legal Services will give a boost to related efforts to address unmet legal needs. His immediate predecessor, James R. Silkenat, launched the Legal Access Job Corps, which seeks to address two key concerns: the unmet legal needs of disadvantaged communities and the oversupply of lawyers—many of them unemployed—in some regions of the United States. In July, the ABA announced the initial recipients of “catalyst awards” being made to legal services offices, bar associations and law schools to help fund projects to employ new lawyers in innovative ways to address the legal needs of poor or moderate-income people. Silkenat is a partner at Sullivan & Worcester in New York City.

Continuity is vital to the long-term success of the ABA’s efforts to improve the justice system, Hubbard said. “It’s very important for our association not to operate in fits and starts, so I’ve assured Jim Silkenat from the very beginning that the Legal Access Job Corps will continue to be part of this larger effort on delivery.” Ongoing studies of the status and future of legal education in the United States also relate to legal services delivery issues, he said.

One of Hubbard’s more pleasant tasks during his presidential term will be to preside over the ABA’s yearlong commemoration of the 800th anniversary of the Magna Carta, which was sealed by King John of England in 1215 at the insistence of his barons. The document is widely viewed as the basis for a number of fundamental legal rights, especially in the United States and other common-law countries. The ABA’s commemoration began in August at the annual meeting. It will culminate in June with four days of substantive programs and social events in London, and a ceremony at the ABA’s monument to the Magna Carta at Runnymede outside London, where King John met with his barons on June 15, 1215.

Hubbard inherited the Magna Carta celebration from Stephen N. Zack, who initiated planning for the commemoration when he was 2010-11 ABA president. Zack is administrative partner at Boies, Schiller & Flexner in Miami. But while Hubbard looks forward to leading the ABA’s Magna Carta commemoration, he emphasized that there are important lessons to be learned from it as well.

“We all know the statistics that show a lack of understanding by most citizens about our constitutional democracy,” Hubbard said. “It is absolutely essential that if we’re going to retain our form of government and protect those rights and liberties, for citizens of our country to know the foundations of our freedom—and Magna Carta is one those bedrocks, one of the foundations of essential tenets in our Constitution and our state constitutions.” Moreover, he said, “it’s important for lawyers to step back and think about what we do every day, and why we do it.”

Hubbard comes well-prepared to the ABA presidency. He has served in the policymaking House of Delegates for more than 25 years, including a two-year term chairing that body from 2008 to 2010. He also has served on the Board of Governors and chaired the ABA Day in Washington Planning Committee for 2011 and 2012. He is a past chair of the Young Lawyers Division and a past member of the Standing Committee on the Federal Judiciary. He is the chair of the board of directors of the World Justice Project, for which the ABA is a strategic partner. From 2011 to ’13, he was a member of the Commission on Ethics 20/20, which conducted a major review of the impact of technology and globalization on the ABA Model Rules of Professional Conduct.

Hubbard credited the legal community for shaping his thinking about the legal profession. “I do think I come from a community where professional courtesy is still practiced at a high level,” he said. “There is a certain thread of courtesy that has been passed from generation to generation in Columbia, where I practice. We know each other, and we expect to be treated with courtesy. We understand there’s always the next case, and if you want to be in it for the long haul, you need to show courtesy to colleagues.”

Updated on Aug. 7 to reflect that Hubbard is the current chair of the World Justice Project and on Aug. 10 to make minor wording changes to two of Hubbard’s quotes.

This article originally appeared in the September 2014 issue of the ABA Journal with this headline: “Urgent Business: New ABA President William Hubbard is committed to closing the gap in legal services delivery for poor and moderate-income people.”