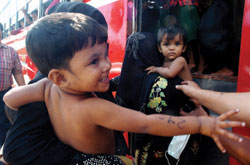 Children are carried onto a bus this past January after being rescued from alleged human traffickers during two separate raids near Thailand’s southern border. AP Photo/Sumeth Panpetch

There is a growing body of legislation at the state level that targets modern human slavery, which occurs primarily in the forms of forced labor and forced sex. The U.S. State Department estimates in its Trafficking in Persons Report for 2012 that as many as 27 million women, children and men are enslaved around the world. The State Department and some nongovernmental organizations put the number of human trafficking victims in the United States at some 100,000.

“Over the last several years, we’ve gone from just a few states with comprehensive laws against human trafficking to a dozen or more states with such laws,” says Jimmy K. Goodman, a director of Crowe & Dunlevy in Oklahoma City. He co-chairs the ABA Task Force on Human Trafficking with Linda C. Hayman, who is of counsel at Skadden, Arps, Slate, Meagher & Flom in New York City, and Laurel G. Bellows, who is principal at the Bellows Law Group in Chicago and the ABA’s immediate-past president.

But the laws currently on the books can vary widely from state to state, and the laws in some states are more comprehensive than in others. That’s where the Uniform Act on Prevention of and Remedies for Human Trafficking (PDF) comes in.

The National Conference of Commissioners on Uniform State Laws—which also identifies itself as the Uniform Law Commission—took on the task of drafting the uniform act in 2010 at the urging of the ABA Center for Human Rights. The ULC’s drafting committee worked closely with several ABA entities, including the center, the Human Trafficking Task Force and the Section of Business Law, in developing the act. The ULC approved the final version of the act in July, and the ABA’s House of Delegates endorsed it in August at the association’s 2013 annual meeting in San Francisco.

Proponents say the uniform act is an important step in the fight against human trafficking because it sets forth a clear set of substantive provisions that can be adopted by jurisdictions throughout the United States. “If adopted, it will create a floor of legislation across state lines. It also will advance national awareness,” Bellows told the ABA Journal during the annual meeting. Her presidential term ended at the close of the meeting. Fighting human slavery also is high on the agenda of new ABA President James R. Silkenat, a partner at Sullivan & Worcester in New York City.

Taken as a whole, the Uniform Act on Human Trafficking would go beyond what most states already have on the books. The uniform act would, for instance, add to the types of criminal behavior by which victims are induced to engage in sexual servitude or forced labor. “It would include things like debt bondage and taking away identity documents, in addition to the more traditional threats to harm people,” says Terry Morrow, legislative director and legal director for the ULC.

Among other key provisions, the uniform act would make it a felony to knowingly patronize a victim of sexual servitude. An individual would commit the felony crime of patronizing a minor if the victim is younger than 18, and the patron would not have to know that the victim is a minor. (Most states already have statutes that make it a crime to patronize a minor for sex.)

Many states now prosecute victims of sexual servitude as prostitutes. The uniform act would change that. “The act seeks to both protect victims and enable them to start their lives anew,” says Morrow. The model act would allow people charged with prostitution an affirmative defense that they were forced to commit the crimes because they were being trafficked. A minor would be immune from prosecution for prostitution or related charges as a direct result of being a victim of human trafficking. The model act also would allow victims to apply to vacate past convictions for prostitution and other nonviolent crimes, seek restitution from their traffickers, and qualify for state services or benefits, including victim compensation funds.

The uniform act has some powerful muscle behind it. The ABA, the ULC, state bar associations and numerous NGOs all will be pushing for passage, although the measure has not been submitted for adoption in any state, according to the ULC website.

“Our main challenge is informational,” Morrow says. “State legislators and officials often say their states already have laws against human trafficking. We need to show them there are gaps that can be filled by the uniform act.”

Proponents of the act acknowledge that some parts of it could be a tough sell. Section 15, for instance, which gives minor victims immunity from prostitution charges, is essential if victimized children are to be treated fairly and obtain the services they need to recover from the trauma of being trafficked, says Samantha Vardaman, senior director of Shared Hope International in Arlington, Va., an NGO that fights human slavery. She is a liaison to the ABA’s Human Trafficking Task Force.

But this provision “will require intensive education for state legislators and law enforcement personnel, many of whom believe the only way to intervene is to arrest the child,” she says. “Right now, just seven states have some type of statutory immunity for minors, and in three of those states the immunity is limited to minors under 16. In one additional state, Texas, case law limits prostitution charges for minors, but only for those under 14.”

Proponents plan to initially push for enactment of the uniform act in about 15 states. “These are the states that have reached out to the ULC and expressed interest in enacting the act, or someone in the state was already working on a human trafficking law, or someone encouraged the ULC to reach out to that state because there is a big gap between the state’s existing law and the uniform act,” Morrow says.

But proponents also are optimistic that the act will be adopted in most states. “Historically, when a uniform act has been passed 50-1 by the ULC and passed unanimously by the ABA’s House of Delegates, it has gotten widespread support,” says Goodman. “I expect many states will consider the act this year and many states will adopt it by next year. It think it will get traction.”

Nevertheless, few experts would argue that the uniform act should be the final legislative word on fighting human slavery at the state level. “The ULC’s drafting committee went as far as they could go,” Vardaman says. “With the uniform act, we are trying to set a baseline of legal standards that would minimize inconsistencies among current state human trafficking laws. Our intent is to do that and then build upon the act in each state.”

The uniform act does not, for instance, address the plight of “bottom girls,” those who are “put out on the streets to manage other girls, and they are the fall guys if authorities intervene,” Vardaman says. “They are a buffer protecting the traffickers from being arrested. And when these bottom girls are charged with human trafficking offenses, they can’t raise an affirmative defense that they were themselves victims of trafficking.”

Another issue that the uniform act sidestepped is whether those who buy the services of sex slaves should face the same penalties as sellers. Many in the field maintain that buyers and sellers should be treated with equal severity. Laws adopted by 16 states and Congress do just that, according to Vardaman. But drafters of the uniform act steered clear of the issue out of concern that including such a provision would endanger its prospects for passage in many state legislatures.

“Getting rid of an embedded criminal enterprise such as human trafficking will not be easy,” Bellows says. “It will take time and discipline and continued persistence over the long term. But I trust in the American people to take this issue to heart and help the victims who cannot help themselves. Slavery in the land of the free will not be tolerated.” Plenty has been said in recent times about the need to fight the growing scourge of human trafficking, but now the ABA and the National Conference of Commissioners on Uniform State Laws have developed a legislative strategy that they say has some real teeth.

This article originally appeared in the December 2013 issue of the ABA Journal with this headline: “A Law with Bite: New approach is tougher on human trafficking and more supportive of victims.”