Orrick Herrington & Sutcliffe touted a new job title in 2011 with career associates—attorneys working at about half the salary of traditional associates and not on a partnership track.

Kilpatrick Townsend & Stockton followed in August with department attorneys. They work like associates but at reduced hours and off a partnership track.

October brought a similar move from Greenberg Traurig, which has crafted two new titles: Legal residents will devote one-third of their time to training while taking home less pay and being billed out at a lower rate than partner-track associates. Practice group attorneys will have roles mirroring the new positions at Orrick and Kilpatrick.

“The C-level titles show not only a progressive mindset within the legal arena but a more understanding mindset when dealing with business owners,” Fichtel says. “I also felt associates denoted a younger, less experienced individual. Attorney is a more accepted term whether you’re a one- or a 20-year attorney.”

Don’t be fooled into thinking a trend is afoot.

Jamie Cole, managing director at Weiss Serota Helfman Pastoriza Cole & Boniske in Fort Lauderdale and president of the Florida Association of Managing Partners, says: “In the 25 years I’ve been practicing, I’ve certainly seen all types of titles at firms. It’s more marketing than anything else. As long as titles aren’t misleading, they’re fine.”

Some of today’s title tweaks go deeper than marketing, says Steven Stanton, managing director of disputes and investigations at consulting firm Navigant in Washington, D.C., who says he spends his waking hours with lawyers.

Two factors are driving firms, Stanton says. The first is the economic challenges of the past five years. The second is lawyers’ changing professional expectations and desires, which he expects to evolve even more in the next 10-20 years. Both have prompted firms to structure more flexible work arrangements.

“Creating new positions provides more flexibility to still have associates but at lower billing rates,” agrees Dan Binstock, a partner at legal search firm Garrison & Sisson in D.C. “It also takes some pressure off the firm to be constantly grooming people for partnership who may not have the DNA to practice as partners. However, they may still bring a valuable skill set or expertise. This is a win-win.”

“Our residency program allows us to give a broader range of people a chance to get trained and work in our environment, and it gives us a chance to be exposed to a broader level of talent,” he says. “And the practice group attorney program can serve the firm’s economic needs and the lawyer’s lifestyle needs. Most importantly, both new positions address a client need, which is to have attorneys getting paid and charged out at levels that make business sense.”

Tinkering with titles, however, isn’t risk-free for lawyers or firms.

“I presume some lawyers in these new positions won’t get the same opportunities, won’t be put on top-shelf assignments, and won’t get the same level of training and mentoring as partner-track associates,” Stanton says. “And while it probably boosts profit per partner, is it limiting the development of the next generation of partners? And is it the right thing to do from a long-term firm growth perspective?” 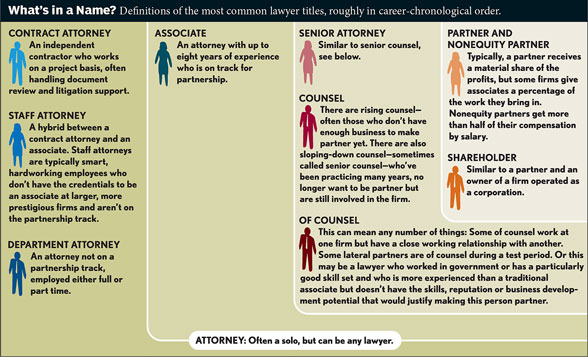 This article originally appeared in the January 2014 issue of the ABA Journal with this headline: “The Job-Name Game: Titles give firms work, salary flexibility.”