New Rules, New Work: A Lot is Still to be Decided Under Dodd-Frank 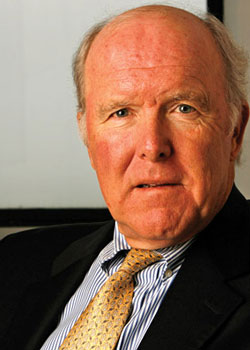 Cornelius Hurley: "There is ambiguity in the new law." (Photo by John Owens)

Lawyers interpreting the behemoth Dodd-Frank Wall Street Reform and Consumer Protection Act, signed by President Barack Obama last summer, may find their workloads—and perhaps their pessimism—renewed. Dodd-Frank is named after co-sponsoring Sens. Christopher Dodd, D-Conn., and Barney Frank, D-Mass. They led the hammering out of compromises resulting in new powers to the Federal Reserve, the Federal Deposit Insurance Corp. and a new Consumer Financial Protection Bureau, among others.

“The financial industry attorneys will be kept busy,” says Cornelius K. Hurley, director of the Morin Center for Banking and Financial Law at Boston University School of Law. “Deciphering the impact on banks, mutual funds, insurance companies and even government regulators is difficult because there is ambiguity in the new law that lends to varying interpretations on what the regulators will require when implementation occurs.”

WHAT IT MEANS TO LAWYERS

As consumers, lawyers may be affected as follows:

• No free checking? The above described caps on bank merchant fees will likely kill free checking, say several analysts, as banks adjust to capture lost income. “Australia’s central bank imposed a similar interchange fee cap [in 2006], and a GAO study of its impact found that the cap ended up costing consumers because of fees being assessed elsewhere,” says Dan Trigg, managing director in the Chicago office of the McGladrey & Pullen accounting firm.

• Lending. “Unless you’re a AAA borrower, down the road, anticipate difficulty getting credit on favorable terms,” Trigg says. “Implementing the new law’s increasing costs and capital requirements means bankers must find ways to protect the equity they have.”

• Fewer banks? Half the country’s 8,000 banks have less than $100 million in assets. “With the new law’s increased compliance costs, … small banks will consider whether they should get bigger or get out,” Trigg says.

“The devil is in the details,” Trigg says, and the details will come in the form of regulations written over the next 18 months.

“It will be months, if not years, before the agencies have completed all the regulations required to implement the 2,319-page legislation,” says Hurley, a former Federal Reserve assistant general counsel. “Once drafted, those regulations will involve another aspect of legal analysis.”

New regulation and oversight may, or will, include:

• Hedge funds with $100 million or more in assets must register with the U.S. Securities and Exchange Commission.

• Standard & Poor’s, Moody’s Investors Service and Fitch Ratings are exposed to liability for “knowing or reckless” behavior since these agencies’ “forward-looking statements” no longer have First Amendment protection.

• For banks playing the hedge fund game, the Volcker rule limits how they make such speculative investments.

• A new Financial Stability Over sight Council monitors systemic risks and issues recommendations to the Federal Reserve on rules for capital, leverage, liquidity and other requirements.

• “Too big to fail” institutions such as JPMorgan Chase, Citigroup, Bank of America, Wells Fargo, Morgan Stanley and Goldman Sachs have additional oversight but remain advantaged. “Because of the bailout,” Hurley says, “the market learned that the government won’t let the TBTF institutions go under. This new law reinforces that status.”

Big subsidy creditors will give such institutions lower rates—what Hurley calls a “taxpayer subsidy”—because they “are, in essence, backed by the government, so creditors and commercial depositors see them as better risks.” According to Hurley, calculations of that ongoing subsidy have been from $40 billion to $100 billion annually.

The law also sets up a new system to liquidate such firms “instead of subjecting them to bankruptcy,” Hurley says.

Meanwhile, questions surround how the Consumer Financial Protection Bureau will satisfy its intended purpose of combating consumer abuses by the marketplace.

“If it creates in the public a greater sense of security in their financial transactions, that is a positive,” Hurley says. “The negative is that we don’t yet have a definition for what an ‘abusive’ practice is such that the bureau will restrict it.”

Susan A. Berson is a partner with the Banking & Tax Law Group of Leawood, Kan. The author of The Modern Rules of Personal Finance for Professionals, she may be reached at [email protected]