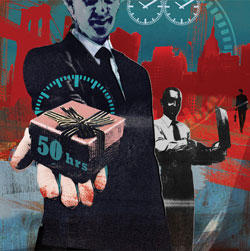 Only about a third of those seeking admission in New York are graduates of the state’s 15 accredited law schools. Illustration by Tim Marrs.

A new rule adopted last year by the New York Court of Appeals that went into effect Jan. 1 will change the equation for almost everyone seeking admission to the state bar and could set a new standard for pro bono requirements that law students must meet.

In September, New York’s highest court added a provision to Part 520 (PDF) of its Rules for the Admission of Attorneys and Counselors at Law requiring that nearly every applicant seeking admission to the state bar “shall complete at least 50 hours of qualifying pro bono service prior to filing an application for admission.” The requirement applies to both law school graduates and lawyers from other jurisdictions, including foreign lawyers—who must go through the normal admissions process. The only group exempt from the rule is those seeking admission without examination.

This is the first rule of its kind in the United States. New York Chief Judge Jonathan Lippman outlined the rule in a Law Day speech on May 1, 2012.

The new rule broadly defines pro bono service to include work performed for people of limited means, not-for-profit organizations, and other individuals or groups seeking to promote access to justice. Legal assistance work performed through law school legal clinics or government entities also would qualify. All pro bono work must be performed under supervision of a law school faculty member, licensed attorney or judge. The work may be performed in any U.S. state or territory, the District of Columbia or a foreign country.

The 50-hour pro bono requirement kicks in immediately for students now in their first or second years of law school, and it will apply to every applicant for admission to the New York bar on Jan. 1, 2015.

The rule seeks to achieve two primary—and related—goals, according to a report issued in September by the Advisory Committee on New York State Pro Bono Bar Admission Requirements. “By requiring 50 hours of pro bono work, properly supervised, from the many thousands who apply for New York bar admission each year,” the report states, “this initiative addresses the crisis in access to justice and—just as importantly—helps prospective attorneys build valuable skills and imbues in them the ideal of working toward the greater good.”

CHANGE HEARD ’ROUND THE WORLD

New York’s new pro bono rule will have a ripple effect far beyond its own boundaries since the state—especially New York City—is such a magnet for lawyers. And most of them aren’t even from New York.

More than 15,000 candidates take the New York bar exam every year—about 20 percent of all the candidates for the bar in the United States—according to the advisory committee’s report. Only about a third of those seeking admission in New York are graduates of the state’s 15 law schools accredited by the ABA Section of Legal Education and Admissions to the Bar. A third come from almost every other state in the union, and a third are lawyers from foreign jurisdictions.

“While it’s a New York rule, it really has implications beyond New York” says Esther F. Lardent, the president of the Pro Bono Institute in Washington, D.C., who advised the New York Court of Appeals and its advisory committee on implementation of the rule. Out-of-state students planning to seek admission in New York will have to take the pro bono requirement into account early on in their law school studies, she notes.

A tougher challenge could face foreign lawyers seeking admission in New York, Lardent says. “Some come from jurisdictions that don’t have a pro bono culture,” she says. “It’s an area that will require some real creativity.”

Beyond the immediate implementation of the rule, a broader question is whether New York’s action will set a precedent for other jurisdictions. California, Massachusetts and New Jersey have begun to give preliminary consideration to similar rules, says Lardent. “My sense is that a number of states will watch New York and how this process works there.”

But at least at this early stage, there are no indications of interest in imposing mandatory pro bono requirements for licensed attorneys. While the ABA and state bars have strong policy commitments to pro bono work by lawyers, no state requires such efforts. All states but one—Illinois—have provisions in their professional conduct rules urging lawyers to engage in pro bono work. Many of those provisions are variations of Rule 6.1 of the ABA Model Rules of Professional Conduct, which states: “Every lawyer has a professional responsibility to provide legal services to those unable to pay. A lawyer should aspire to render at least 50 hours of pro bono public legal services per year.” But as its language indicates, Model Rule 6.1—and its state progeny—is essentially aspirational in nature.

The New York rule for those seeking admission to the bar is unlikely to change that approach. “Is this a camel’s nose under the tent?” Lardent says. “I don’t think so.”

"New York's new rule requires bar applicants to perform 50 hours of pro bono," March, 2013, should have identified North Carolina as among the states whose professional conduct rules urge lawyers to engage in pro bono work. No state requires mandatory pro bono, and Illinois is the only state that does not urge lawyers to do pro bono work. The ABA Journal regrets the error.