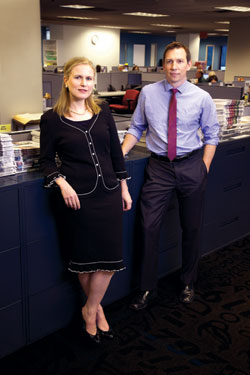 Back in September, when reporters for the Record in Bergen County, New Jersey, heard that traffic on the George Washington Bridge near Fort Lee seemed worse than usual, North Jersey Media Group general counsel Jennifer Borg and her staff of reporters faced the difficult task of convincing a government in damage-control mode to live up to its obligations under the state’s public disclosure laws.

Now, as New Jersey Gov. Chris Christie’s political star seeks to escape from the cloud caused by the traffic jams—as well as allegations of political payback and withholding information—he can thank Borg, Record reporter Shawn Boburg and several of Boburg’s colleagues at the paper for putting him there.

A strong advocate of open and transparent government, Borg is the paper’s primary force when it comes to seeking public records under New Jersey’s Open Public Records Act. She frequently uses litigation to force government agencies to comply with freedom-of-information laws.

The fact that she involves herself personally in litigation makes her unique among media outlets in New Jersey. “To my understanding, I’m the only general counsel of a newspaper in New Jersey,” says Borg, who notes that Gannett Co. and Advance Publications news media both use outside counsel for open records requests. “Quite frankly, it’s very expensive to use outside counsel. With a couple of exceptions, we’ll use outside counsel from time to time, but usually it’s just us.”

One such outside counsel is Bruce Rosen of the New York and New Jersey firm McCusker, Anselmi, Rosen & Carvelli. Rosen successfully defended the paper when it was accused of libel for publishing information taken from court documents that had not been ruled on by a judge.

Rosen says that back when he was a reporter at the Record from 1977 to 1986, the paper used a lot of outside lawyers for records requests. Borg, however, brought much of that in-house.

“Jennifer has made it a personal mission to be a really aggressive OPRA lawyer for her staff,” Rosen says. “Whenever they want something, she and her staff take it upon themselves to get it. At a time when things are tight, it’s admirable.”

Of course, it helps that she isn’t just the general counsel: Her family has owned the Record since 1930, and the paper serves as the flagship publication for the North Jersey Media Group, which was formed in 2000 to manage the Borg family’s 50-plus newspapers and magazines. The NJMG, meanwhile, is one of three major newspaper conglomerates in New Jersey alongside Advance (which publishes the Star-Ledger and the Times of Trenton, among others) and Gannett.

Borg maintains that it’s the Record’s reporters who deserve the bulk of the credit for uncovering what has come to be known as Bridgegate.

That September, transportation reporter John Cichowski first reported that Mark Sokolich, the Democratic mayor of Fort Lee, believed the move was some sort of punishment from state officials. Boburg, the reporter covering the Port Authority of New York and New Jersey, tried to talk to the authority but got nowhere. “They told us initially it was part of a traffic study,” he says. “But they refused to release any more details.”

There was no gray area when it came to Christie’s office, however. Borg knew they had to comply and helped another member of the reporting team, Melissa Hayes, file a records request in December for emails related to the lane closures prior to the closures becoming public in mid-September.

“I cannot overstate the importance of having in-house counsel when dealing with government agencies that are inherently resistant to releasing public records that could be damaging,” Boburg says. “Jennifer and her attorneys are accessible when reporters need help on wording requests and they keep track of outstanding requests.”

Boburg got a response—it just wasn’t the one he or Borg wanted. The administration said in mid-December that there were no documents relating to Boburg’s request.

However, 22 emails were soon leaked to the Record. One was from Bridget Anne Kelly, then the deputy chief of staff, to David Wildstein, a Christie appointee to the port authority board of commissioners. It read: “Time for some traffic problems in Fort Lee.”

According to Borg, while most of the messages were sent via private email servers like Yahoo, others went to work emails. She says there’s no way the initial search could have turned up zero responsive emails.

“If the custodian had properly searched the emails, they would have found [these 22 messages],” says Borg, who filed suit against the administration in early January. “In the same suit, I allege a pattern and practice of noncompliance by administration officials. We’re asking for all emails and for the judge to allow discovery into what kind of search they conducted, because it was obviously inadequate.”

A hearing was scheduled for April, but the government requested a delay. In early May, Borg filed another Bridgegate lawsuit against Christie’s administration, asking it to disclose which government employees have been indemnified. Borg had previously threatened a lawsuit demanding details of Christie’s contract with the law firm Gibson, Dunn & Crutcher to investigate the lane closures (the report was issued in late March and cleared the governor of wrongdoing). By her count, she currently has nine OPRA lawsuits against the Christie administration pending—three are related to Bridgegate.

As Bridgegate continues to unfold, Borg’s not worried about the consequences of taking on a still-powerful public official. “The minute that we get intimidated or fear political retribution,” she says, “is the day we should close up shop.”

This article originally appeared in the July 2014 issue of the ABA Journal with this headline: “First in Fighting for Facts: Newspaper counsel takes on New Jersey governor personally.”