No Courts, No Justice, No Freedom: 2012 Law Day Theme Will Resonate with Calls for Court Funding 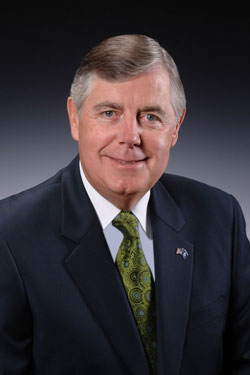 On January 18th, a group called the Open Courts Coalition filled a block of Grand Avenue in Los Angeles and held a rally to support funding for the state judicial system of California.

Yes, you read that right—a rally for our courts that brought together members of the legal profession, the business community and labor leaders. It was a defining moment, and one we hope will be repeated in the coming months as we stand up and speak out for full funding for our judiciary.

State court underfunding is a threat to our system of justice and all we believe in as Americans and as an association. It is harming clients, slowing our nation’s economic recovery and undermining our liberty.

The ABA is organizing what will be a powerful public education event to further highlight this issue for lawmakers and the public at large. The theme and title of Law Day 2012 on May 1 is the message we have taken from Maine to California: “No Courts, No Justice, No Freedom.”

Please join with your state and local bar associations, teachers and business, labor and civic leaders in this year’s celebration of the constitutional freedoms our courts protect, along with the rule of law they nurture. Our ABA call to action has already been sent to state bars, asking them to hold a major public event in every state and territory to highlight the need for adequate funding of our courts.

Since establishing the Task Force on Preservation of the Justice System in 2010, the ABA has gained a wealth of information about the debilitating effects of budget cuts on our courts. The National Center for State Courts, one of our valued partners in raising public awareness of this issue, advises that 42 states cut funding for their judiciaries in 2011. New York closes its courts daily at 4:30 p.m. to avoid overtime costs. Massachusetts has lost 1,100 employees through attrition.

We know that courts have adjusted to the new reality of this difficult economy through efficiency and innovation. But as Kentucky Chief Justice John D. Minton Jr. has said, “We’ve all learned to be resourceful and live with in our means, to change, to evolve, to re-engineer, but state courts are running out of options during the Great Recession.”

And in the face of shrinking budgets, expanding caseloads, political indifference and public ignorance, more people and groups like those in California are saying enough is enough.

The Massachusetts bar has started a new court funding campaign that produced videos and placed billboards along two interstates. The New York County Lawyers Association and the state’s bar association have held court funding programs and issued reports to draw attention to cuts there.

In addition to our Law Day efforts, we have placed columns on judicial funding in 27 state and local bar association publications. The ABA is also building bridges with civic and business associations that care deeply about our nation’s justice system. We have found unprecedented partners—the Chamber of Commerce, the Association of Corporate Counsel and the Federalist Society—and each has joined us to support full funding for our judiciaries.

The ABA has distributed to hundreds of state and local bar presidents and executive directors a tool kit that includes videos and other materials to help build support among legislators and in the community. Our task force, led by David Boies and Ted Olson, recently held a forum at the ABA Midyear Meeting in New Orleans, highlighting strategies that can be used effectively with legislators across our nation. The ABA has also established a new Internet portal on this court funding crisis that can be found at ambar.org/courtfunding.

The preamble of our Constitution says we must establish justice to form a more perfect union. Our courts must be open, available and adequately staffed to accomplish that goal. Let’s work together to achieve it in our time.

Otherwise, No Courts, No Justice, No Freedom.