No Jerks: Some Firms Argue that Collegiality Pays 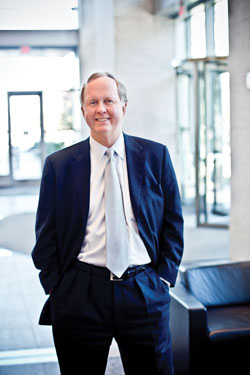 Some law firms have an official policy: No jerks allowed. Even if it means dismissing a lucrative partner or cutting ties with a client.

After all, to those who take it seriously, the “no jerks rule” is more than a feel-good argument for the power of nice or an attempt to counter the image of lawyers as pessimistic and brash. Ridding the workplace of slackers, downers and bullies is good business, proponents say.

“People end up devoting much more energy to protecting themselves and dealing with abuse than actually doing the job,” says Robert Sutton, a professor of management science and engineering at Stanford University and author of the 2007 book The No Asshole Rule: Building a Civilized Workplace and Surviving One That Isn’t. “There is a line, and certainly in the law you need to argue. But to me the question is: Do people feel safe speaking out?”

At Haynes and Boone, which touts its long-standing no-jerks policy, Dallas-based managing partner Terry Conner talks about “expressing disagreement the Haynes and Boone way.” This doesn’t mean the firm’s 530 lawyers are easygoing or always agree; it means they try to argue respectfully.

If someone is consistently making others feel demeaned, the firm takes a hard line. Practice group leaders, or even Conner, start by counseling the offender internally or, occasionally, bringing in a consultant.

“Folks … may have the right answer, but it’s important to know how you express it [without having to] attack people or really go after them,” says Conner, who is 60 and has been with the firm 36 years.

FROM JERK TO JOBLESS

In a few cases, when all else has failed, the firm has asked people to leave, “including partners who had multimillion-dollars’ worth of business,” Conner says, noting that such problems have been rare. “We don’t think of ourselves as saintly or holier-than-thou, but it’s just that someone like that in the long run creates more problems for us than they are worth.”

The policy extends to clients as well, and Haynes and Boone has had to disengage in a few cases.

“We have refused to move forward with lateral candidates that had ‘jerk genes,’ ” says Robert Giles, Seattle-based managing partner at Perkins Coie, a large firm with an official no-jerks policy.

It helps that many lateral interviewees have a connection to someone at Perkins Coie, someone who can vouch for reputation, and many are already familiar with the culture, says Karen Andersen, chief lateral recruitment officer at the firm, which has more than 800 attorneys in 19 offices. Pairing candidates with two or three partners for long, robust interviews; checking references; and allowing the candidate to get a feel for the atmosphere help ensure that the fit is a good one.

Of course, there’s a fine line between being a jerk and having a bad day, and experts emphasize that appropriate amounts of pessimism, aggression and negative feedback are valuable, even essential, for lawyers.

Still, “the most effective teams,” Sutton says, “and by the way the happiest teams, are the ones that deal with performance problems quickly.”

Jerks, slackers and pessimists can poison the work environment by leading colleagues to withdraw, disengage, hoard information and argue, experts say. In fact, the ability to elicit these natural defensive reactions gives negative workers their influence, says Will Felps, a management professor at Erasmus University in Rotterdam, Netherlands, who has studied team effectiveness and bad apples in the workplace. One experiment (PDF) he conducted showed that a single bad apple can reduce team performance by 30 to 40 percent.

What’s more, bad interactions are more contagious than good ones, both Felps and Sutton point out, noting that psychological research (PDF) has shown that a negative event can be five times as powerful as a positive one.

Bad apples “tend to be contagious,” Sutton says. “And the more powerful they are, the more contagious they are.”