No Will, But a Way: Law Prof and Students Launch African Probate & Policy Initiative 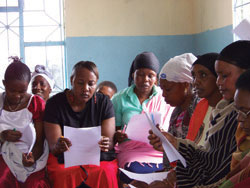 Tanzanian women review questionnaires in preparation for the drafting of their wills by Miami Law students.

If a Tanzanian man dies without a will, his property goes to his family of origin. If he was married, his widow often receives nothing from the estate. In fact, a Tanzanian woman is more likely to receive property if she divorces than if her husband dies intestate.

Gretchen Bellamy, director of international public interest programs at the University of Miami School of Law, saw this disparity as a profound human rights problem. So the former Peace Corps volunteer launched the African Probate & Policy Initiative and took four law students to Tanzania this summer to draft wills for marginalized populations there.

Bellamy and her crew partnered with the Tanzania Women Lawyers Association to help navigate the country’s highly complex legal system, which combines elements of common law, customary law and Shariah. Not surprisingly, they encountered skepticism from many Tanzanians because some in that culture believe that writing a will is “calling your death.” Since even well-educated Tanzanian women often aren’t listed on car leases or property deeds, Bellamy quickly determined that both men and women needed educating about the importance of wills.

After three weeks of class time in Miami, Bellamy and the students made their way through the cities of Dar es Salaam, Mwanza, Arusha and Zanzibar over a four-week period during which they educated couples and wrote wills. Her initial goal was to have each student draft a will, but together they logged more than 300 pro bono hours drafting 103 wills. “It’s a wonderful success story,” Bellamy says. “I realized I’m on to something.”

Charles McGinley, a second-year law student, says he relished the opportunity “to actually meet people and make an impact on their lives. We went out into the villages and talked with people about rights that they had no idea they even had.”

One 91-year-old woman, for example, had spent the last five years fighting in court because her husband had died intestate. “His family was trying to kick her out of the home they had shared for decades,” says McGinley, who wrote about the project at the African Probate & Policy Initiative blog. Although working in Tanzania didn’t change McGinley’s ultimate desire to combine his corporate background with nonprofit work, “it did give me new insight and appreciation for the legal system and rights that we have in this country.”

Since returning from Africa, Bellamy has been enhancing the program for next summer. She hopes to include more local lawyers in the effort because her African counterparts told her that before assisting with this project, they’d never done pro bono work. She also wants to raise funds to cover program fees for the students, who earn school credits for the work and for writing an accompanying academic paper.

Meanwhile, the ambassador of Mozambique has approached Bellamy about bringing the program there.