Not in the Cards 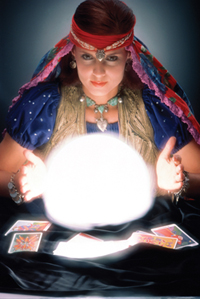 Nick Nefedro says he can forecast the future. So maybe the fortune teller should have known what would happen when he tried to set up shop two years ago in the Washington, D.C., suburb of Bethesda, Md.

Nefedro, however, saw it differently. Claiming the ordinance discriminated against his Gypsy heritage, Nefedro challenged the ban. After losing in the Montgomery County Circuit Court, Nefedro enlisted the American Civil Liberties Union to help appeal the decision. In March, a Maryland appellate court heard oral arguments in his case.

This time fortune may be on Nefedro’s side. His challenge to local ordinances banning fortune telling for money is one of a growing number around the country in which courts are siding with soothsayers.

It’s hard, if not impossible, to say how many jurisdictions ban fortune telling, says Louisiana State University associate law professor Christine Corcos, who has written about fortune-telling bans. “A good number are sitting on the books unenforced until someone comes across them and decides to enforce them,” she says.

The challenges are easier to track. In recent years bans on fortune telling have been overturned, usually on constitutional grounds, in states including California, Louisiana, Nebraska and Wyoming.

In Nefedro’s case, lawyers for Montgomery County argued—as counties tend to argue when these bans are challenged—that the ban was necessary to protect consumers from an activity that is inherently fraudulent.

“The justices pushed the county on whether or not their position is that all fortune telling is fraud,” says Ajmel Quereshi, Nefedro’s ACLU attorney.

“It’s understandable that some people may not believe in fortune telling, might not agree with fortune telling from a policy perspective. But there’s lots of types of speech that I might not like or you may not like, but the First Amendment protects,” Quereshi says,

“Of course, the Supreme Court has not decided whether or not fortune telling is protected speech.”