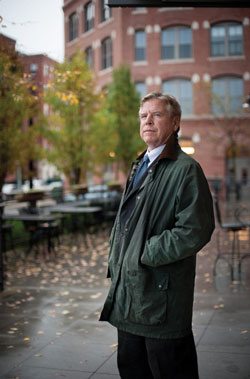 James Ring wants to eliminate the time lawyers spend bullying and bluffing their way through monetary disputes and other protracted negotiations. So the Boston-based trial lawyer has borrowed from the practice of game theory, the science behind conflict resolution, to introduce a series of online solutions that entice both sides to be truthful in their expectations.

The result, he says, is a speedier and less costly resolution of legal skirmishes.

“The problem that lawyers and clients face in society these days is that the vast majority of cases don’t settle until you reach the eve of trial,” Ring says. The reason behind that? “You’re not going to get top dollar unless you wait until the last possible minute.”

Game theory, or the study of interactive decision-making, has been applied to fields as diverse as politics, economics and sports. It is also the subject of A Beautiful Mind, the film about mathematician John Nash, who helped develop the theory. Ring believes it is ripe for use in the legal profession. About four years ago his firm—Chu, Ring & Hazel—teamed up with academics to form Fair Outcomes Inc. The website offers game theory solutions for a range of legal disputes, including those involving property division, business buyouts and reputational damage.

The most notable nonattorney of the Fair Outcomes development team is New York University professor of politics Steven Brams, who has applied game theory to voting systems and the division of assets. Soon after Brams met Ring at a game theory conference at Stony Brook University in New York, they set plans to work together. NYU, which has jointly filed patents on several of the Fair Outcomes applications with Chu, Ring & Hazel, has a minority equity position in the enterprise. Partners at the law firm hold a controlling stake and Ring serves as the CEO.

The simplest of the solutions offered by Fair Outcomes, Fair Buy-Sell, is based on an algorithm Brams helped develop in the 1990s. Aimed at delivering the fairest price in buyout situations, such as when two business partners decide to part ways, it requires each side to confidentially submit what he or she believes to be a business’s true worth. Each value is absolute; there is no chance to negotiate. The system calls for looking at both bids and determining that the highest bidder will be the buyer. It then sets the price at the mean, or midpoint, of the two values.

“They split the difference so that each does better than his offer,” says Brams, who chairs the advisory board for Fair Outcomes. “That’s the important thing.”

Fair Buy-Sell, which Ring says has been used as far away as China and Australia, is now offered for free. Other Fair Outcomes solutions range from $60 to $300.

John McGann, a partner with Wilson Elser Moskowitz Edelman & Dicker in Boston, has dipped his toes in the Fair Outcomes waters on a few cases involving personal injury-insurance disputes. Although the system’s Fair Proposals solution has not yet resolved a conflict for McGann, he says initiating use has prompted discussion with opposing counsel. “I see the potential for it, but I think it’s going to take a little while,” says McGann. “The negotiation dance, it takes too long. From a commonsense standpoint, the whole idea of Fair Outcomes is to get rid of the dance and the posturing.”