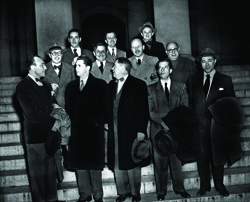 Both before and after World War II, allegations that Communists were deeply embedded in the culture of Hollywood were commonplace and controversial. Faced with a strike by animators, Walt Disney himself made headlines with his claims that Communists were responsible for his labor strife. But although Hollywood pitched its powers of entertainment and persuasion behind the war effort, resentments lingered even after the war ended.

In 1946, a column in the Hollywood Reporter began identifying writers and directors deemed Communist sympathizers by the trade paper’s publisher, and by 1947 the House Un-American Activities Committee decided that the list created a possibility that the film industry was fostering propaganda that could undermine American social values.

Disney and Ronald Reagan, then president of the Screen Actors Guild, testified before the committee, as did other famous actors. Others actively organized against the investigation as an attack on freedom of speech. And 19 witnesses subpoenaed by HUAC—many of them important Hollywood writers and artists—said they would not provide testimony implicating colleagues in Hollywood.

Of those, 11 were forced to appear before the committee, but only playwright Bertolt Brecht actually testified. The other 10 refused, saying that to do so violated their Fifth Amendment rights.

On Nov. 24, 1947, Congress voted to hold the “Hollywood 10” in contempt of Congress, and the following day the Motion Picture Association of America announced that its studios would no longer employ any of the 10 until they were cleared of any association with the Communist Party.

Although blacklisted by Hollywood, some continued to work by moving abroad. Some, like Lester Cole and Ring Lardner Jr., submitted screenplays to the studios under pseudonyms or the names of friends. For some, the end of Hollywood blacklisting came by way of directors like Otto Preminger, who gave credit to one of the Hollywood 10, Dalton Trumbo, for the screenplay of Exodus.

This article originally appeared in the November 2013 issue of the ABA Journal with this headline: “Congress Holds ‘Hollywood 10’ in Contempt.”

Print and initial online versions of “Congress Holds ‘Hollywood 10’ in Contempt” should have stated that the Fifth Amendment--not the First Amendment--was cited by writers and directors in their refusal to testify before Congress in 1947. The ABA Journal regrets the error.