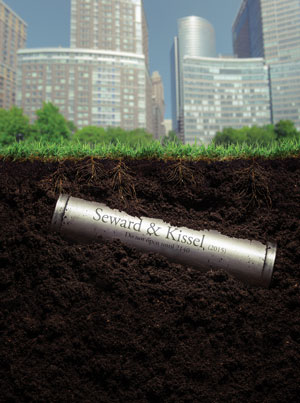 The law firm of Seward & Kissel found a unique way to commemorate a rare milestone: In celebration of its 125th birthday, the firm buried a time capsule in Battery Park outside the firm's New York office.

“We thought it would be fun and draw some attention to our anniversary,” says managing partner John Tavss. “It was offbeat and we figured the attorneys would get a kick out of it.”

Tavss explains that Seward & Kissel was founded in 1890 under the name Smith & Martin and has operated continuously in downtown New York City since then. The firm got its start doing work for individuals and—as it acquired exiles from Wall Street firms—it grew to 160 lawyers with offices in New York and Washington, D.C.

Seward & Kissel’s time capsule is to be opened in another 125 years. Those unearthing it will discover legal items and law firm memorabilia, including a BlackBerry (which, Tavss quips, is already obsolete), documents from 1949 related to the first hedge fund, photos of all the firm’s current personnel, a schedule of 2015 billing rates, a list of the firm’s top 50 clients and another of today’s top law schools, pictures documenting the impact of Superstorm Sandy, a 2015 Zagat restaurant guide for New York, and the New York Times obituary of George Seward from 2012. “Everyone agreed a time capsule would be a fun idea,” Tavss says. “We’re not taking ourselves all that seriously.”

But in what could turn out to be serious cash, Seward & Kissel’s time capsule also contains Fidelity documents establishing a $1,000 trust. Assuming the historic 7 percent annual return rate, that little nest egg could be worth more than $4 million when the capsule is opened in 2140. “In the off chance the firm is not around in 125 years,” Tavss said in his remarks at the celebration, the New York City Bar Association is to retrieve the capsule, use some of that trust money to throw “a hell of a party” and keep the rest as a donation.

The firm also made a $125,000 donation to the Battery Conservancy, which is working to revitalize the lower Manhattan park near the firm’s office.

This article originally appeared in the February 2016 issue of the ABA Journal with this headline: “Happy Quasquicentennial! NYC law firm buries a time capsule to celebrate its 125th birthday.”