NYC lawyer turns to zombies, werewolves and cocker spaniels for his books about case law 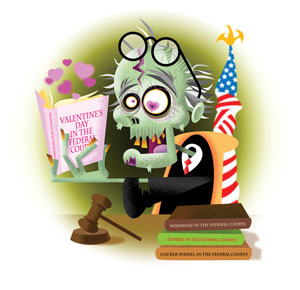 Josh Warren is a New York City lawyer with an offbeat hobby: He publishes books that compile references in federal court decisions to things like zombies, cocker spaniels and werewolves. His first book, Zombie Law, was underwritten in 2012 by a $6,500 Kickstarter campaign, but it didn’t find a huge audience. Undeterred, he’s since published works including Werewolf in the Federal Courts, Cocker Spaniel in the Federal Courts and, most recently, Valentine’s Day in the Federal Courts.

While the books don’t sell that well, according to Warren, he may have a deeper, possibly darker, motive in publishing his volumes.

“The original inspiration was to get people to read case law,” he says in all seriousness. “It’s kind of pop culture-related, if you think about it,” Warren adds.

This article originally appeared in the July 2015 issue of the ABA Journal with this headline: “Zombies, Werewolves, Cocker Spaniels and Valentine’s Day—Oh My! NYC lawyer authors an unusual collection of books.”