Occupy the Courts: The Nationwide Movement Has Left a Mixed Bag of Legal Results 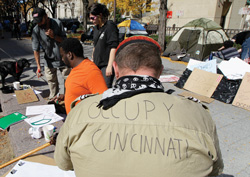 Protesters in Cincy’s Piatt Park were fined last October for refusing to leave; they have since gained the right to stay. Photo by AP Photo/Al Behrman.

The Occupy movement entered public consciousness—and public space—in September 2011, when protesters took over Zuccotti Park in New York City’s financial district. Since then, Occupy groups have formed across the United States, protesting social and financial inequalities, excessive corporate influence on government and overall income disparities. Protesters actually occupied government property, putting up tents and camping for weeks at a time. It didn’t take long before the movement led to a welter of lawsuits across the country, as government officials sought to evict the occupiers and prevent 24-hour protests.

But because of the nationwide range of courts hearing the cases and municipalities adopting the rules, the results have been a hodgepodge of court decisions, some removing the Occupy campers, others allowing the movement success.

“It is difficult to project the trajectory of the lawsuits in process or soon to be in process,” says Idaho attorney Bryan K. Walker, who is representing Occupy Boise.

“For one thing, each Occupy organization is distinct in its approach to the national demonstrations,” Walker says. “For another, the venues chosen for the demonstrations, the political and legal climate in each venue, and the reactions of authorities, are so diverse as to render any prediction mere speculation.”

In February, for example, a federal district judge ruled in Watters v. Otter that government officials could prohibit members of Occupy Boise from camping on state grounds on the site of the old Ada County Courthouse across the street from the Idaho Statehouse. The legislature had responded to protests by passing a law that would prohibit camping on state land.

But while Judge B. Lynn Winmill upheld the ban on overnight camping, he nevertheless prevented officials from removing the tents that formed the group’s symbolic tent city.

“There is no evidence of any health or safety concerns from a symbolic tent city and no evidence that Occupy Boise is keeping other groups from using the area as a protest site,” Judge Winmill wrote.

Meanwhile, Occupy Cincinnati scored a victory as it entered into a settlement with city officials in March. The Queen City dropped criminal charges against occupiers and agreed that a portion of the city’s Piatt Park will be open 24 hours a day for protests.

“We employed a multiforum strategy,” including state criminal cases and federal civil rights cases, says Cincinnati attorney Jennifer M. Kinsley, who represented the Occupy group. The effort was to “attack every aspect of the city of Cincinnati’s park board rules and the police response to Occupy.”

Kinsley says city officials moved toward a settlement when they realized they would have to prosecute more than 300 criminal cases. “That realization, coupled with the resolve of the Occupy participants to assert their rights at every level of the court system, required the city to rethink its initial opposition to a 24-hour open space.”

Other decisions, however, have rejected the Occupy movement’s claims for legal relief by denying temporary restraining orders or issuing preliminary injunctions. In Occupy Columbia v. Haley, U.S. District Judge Cameron McGowan Currie in Columbia, S.C., ruled in December in favor of state officials and an emergency regulation passed by the state’s Budget and Control Board that prohibited individuals from living and sleeping on statehouse grounds.

“The text [of the regulation] is broad and prohibits all individuals and groups from camping or sleeping on the statehouse grounds and in all buildings located on the grounds,” Judge Currie said. “The restriction is a regulation of conduct and does not target a particular message.”

U.S. District Judge Nancy Torresen of Bangor, Maine, reached a similar result in Freeman v. Morris. In her December ruling, she found that members of Occupy Augusta could not camp overnight in Capitol Park.

“Allowing the plaintiffs to continue indefinitely to occupy the park would ultimately tend to suppress, rather than promote, the free exchange of ideas,” the judge wrote, emphasizing that others may wish to use the park for other protests and public gatherings.

Despite these wide-ranging rulings, says Boise attorney Walker, “certain common threads can be drawn from these disparate cases, in the sense that they are addressing the parameters of protected political expression and assembly.”

One example is that government attorneys principally rely on the U.S. Supreme Court’s 1984 decision in Clark v. Community for Creative Non-Violence as their legal bulwark. In that decision, the court upheld a federal park regulation that prohibited protesters from sleeping in tents in Lafayette Park and the National Mall in Washington, D.C.

The court acknowledged that overnight sleeping as part of a “sleep-in” demonstration to show the plight of the homeless was a form of expressive conduct that triggered First Amendment review. However, the court ruled that the ban on overnight camping was a reasonable time, place and manner restriction on speech, because the regulation was content-neutral, served a substantial governmental interest, and left open ample alternative means of communication.

The high court also reasoned that the camping ban applied to all people, not just those protesting the plight of the homeless. Furthermore, the regulation served the government’s interest in preserving and protecting the parks from wear and tear that would take place with overnight camping. Finally, the court indicated that there remained many other ways for the protesters to convey their message about the plight of the homeless.

But, Walker says, “an extremely critical and unfortunate side effect of the passage of legislation of this type is to functionally criminalize homelessness, a side effect that I think is usually overlooked. It is distressing, in a very real sense, to understand that protesting against, among other things, homelessness, has led directly to the enactment of laws that exacerbate the problem, rather than mitigating it.”

In addition to the court rulings, state legislatures have also been all over the map, literally and figuratively. Some states have been more proactive, passing laws in direct response to the protesters. For example, the Tennessee legislature passed the Equal Access to Public Property Act of 2012, which criminalizes camping on state-owned land that is not designated for camping. The measure, which was signed by the governor on March 2, empowers officials to seize items commonly associated with camping, including tents, portable toilets, tarps, ropes and blankets.

Tennessee legislators had the Supreme Court’s Clark ruling in mind when they passed the new law. “We definitely modeled our statute after the National Park Service regulation at issue in the Clark case,” says state Rep. Vance Dennis. “We did so for two very important reasons: We have a number of beautiful and historically significant facilities that we needed to protect for current and future generations, and we wanted to ensure that the policies we implemented would be constitutionally sound.”

Proponents insist the law will further the rights of all to use government property. “The reasonable, content-neutral regulations we implemented will help to preserve our state property and provide a location for all citizens to express their approval or disapproval of their government, their religious beliefs, or any other topic they wish to opine on,” says state Rep. Barrett Rich, another co-sponsor of the new law.

Those who support the Occupy protesters see the new laws as a way to suppress the movement’s message.

“New laws and amendments to existing laws are most definitely occurring as a reaction to the Occupy movement,” Kinsley says. In Cincinnati, park board rules have been amended twice since Occupy began. The last time the park board revisited or amended its rules was in 1974.

“Some people within the movement have noted that this is not necessarily a good thing,” says Kinsley. “For example, in Cincinnati it is now illegal to lie down on a park bench. My feeling is that these reactionary laws create fodder for more fights down the road.”

Whether the collection of Occupy cases will leave a lasting imprint on First Amendment jurisprudence remains to be seen. “If Occupy exists at the end of the year, I think the movement will be uniquely poised to assert its rights in court in an unprecedented way,” Kinsley says.

However, she says, “it takes years for cases to be litigated to finality, including potentially layers upon layers of appeals. If the movement dies out, the cases become moot. So only time will tell.”