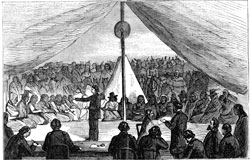 Sketch by James E. Taylor, Courtesy of the Library of Congress.

On Oct. 11, 1867, members of the Indian Peace Commission, accompanied by 500 U.S. Cavalry troops, gathered on the banks of Medicine Creek in Kansas. There, for the next several weeks, they met with members of five tribes of the Southern Plains with whom white soldiers and settlers had been chronically at war. Created by Congress in July, the commission was immediately deployed on a far-flung tour of the Western territories to gather testimony about the causes of conflict between the cultures.

The commission had agreed to meet at Medicine Lodge, a location with ceremonial significance, as a concession to the Indians, and by Oct. 28 a treaty was in place—actually three separate agreements—signed by 49 leaders of the Kiowa, Comanche, Southern Cheyenne, Arapaho and Plains Apache. In exchange for peace, the treaty set aside lands, mostly in Oklahoma and Kansas, and promised annuities for the tribes.

But in its report to President Andrew Johnson, delivered in January 1868, the commission abandoned diplomacy in a scathing assessment of the causes of conflict. The commission described most tales of Indian barbarism against white settlers as either wildly exaggerated or “wholly without foundation,” seemingly designed to provoke a violent response against the tribes. Treaty upon treaty and boundary upon boundary were violated by settlers, land speculators or Congress. The Indian Service, designated to administer earlier treaties, was rife with patronage, ineffective and corrupt. Moreover, the nation’s $30 million war against the Indians in 1865 was “more than useless and expensive; it was dishonorable to the nation, and disgraceful to those who had originated it.” In 1871, heedless of the criticism, Congress began rolling back the terms of the Medicine Lodge Treaty; and in 1903, the Supreme Court ratified its right to do so.

In Lone Wolf v. Hitchcock the court reiterated an earlier decision, but not without irony: “The power of the general government over these remnants of a race once powerful, now weak and diminished in numbers, is necessary to their protection, as well as to the safety of those among whom they dwell.”

"Medicine Lodge Treaty Is Signed," October, should have said that the treaty was signed in the state of Kansas.